Secret Weapon in the Vegetable Wars 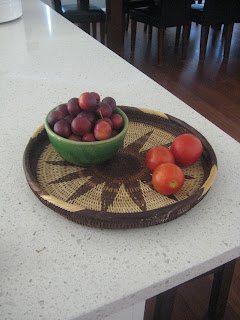 Do your children joyfully eat up all their vegies and love to fill their lunchboxes with healthy slices of fruit? No, mine either. Posy, in particular thinks fruit in lunchboxes is nasty. Even though I put a frozen ice block in her insulated lunchbox, apparently it is warm by lunchtime, so it comes home again. Even frozen blueberries are nasty, so I hear, when they defrost.
I also want to make sure that fruit and veg from the garden gets used up, not composted or wasted, and sometimes there is fruit and veg in the fridge that needs eating today, and won't be nice tomorrow. My weapon in this war is a small, green ceramic bowl. I remember when I bought it, years ago, The Man raised an eyebrow at me, which meant, 'Another ceramic bowl? Really?', but little did he know what an important role it would play in our children's nutrition.
So, every day when the children come home from school, the green bowl is filled with something from the fridge or garden - grapes that need eating up, a handful of cherry tomatoes and beans that are perfectly ripe. Sometimes the bowl is accompanied by a plate of carrot and celery sticks with peanut butter or dip. Sometimes there is watermelon, or slices of a perfect peach that only had a teeny tiny bug inside it, so needed cutting up. Children tend to take a dim view of fruit with bugs, but what they don't know won't hurt them... there is very little food produced in a home garden that would pass the 'perfect produce' supermarket test, or fussy child test, but chopped up, nobody can tell the difference.
Now, if I asked the children if they would like fruit or veg for afternoon tea, they would mostly say 'no'. So the secret part of this weapon is silence. Silence is golden. I have never actually commented on the bowl of fruit on the kitchen bench. I have never suggested that they eat it. I don't know if they maybe think the fruit fairy leaves it.. but I do know this. The bowl is nearly almost always empty by bedtime.
Today I have filled the bowl with cherry plums that hang over our back fence from the neighbours' yard. Yum. You know, I probably wouldn't eat so much fruit without the magic green bowl either..
﻿

Heather said…
I can relate to this post. When tangerines are in season, I keep a platter FULL of them on the coffee table in front of the television. When my kids finally collapse in front of the TV after a long day, I think they find getting up to get food annoying, so they take the easy way out and eat the tangerines. No nagging. So easy.
Saturday, 09 March, 2013

Jo said…
Yes, I think of it as the Zen way of parenting. Take the line of least resistance to get them where you want them to go.. parenting by stealth!
Saturday, 09 March, 2013

Anonymous said…
Mine eat their vegies and fruit but, like yours, have individual quirks. There are certain fruit that can go in lunch boxes, others that will sit and rot unless I cut them up and then they will guts them up in a blink and others that they eat in fashion, as in "I don't like that currently. I might some other time." When? When they're off?

And vegies have "rules" too. I can't put feta in salads or they won't eat any of the salad. Carrots are gobbled up raw but not eaten with anything fancy done to them. Etc etc
Saturday, 09 March, 2013

Judy said…
When my youngest son was 4 he was very picky with fruit and veg, so we did a 5 a-day poster. This showed every member of the family and at dinner time we would count up how many pieces of fruit and veg they had eaten that day and give them stars. Blatantly nobody but me was eating enough, so we started 'Fruit-time' When the kids got in after school, I would chop up a plateful of apples, pears, kiwis, mango etc...and the kids would demolish it! Just say Fruit-time and they and their friends would come running! I got lazy in the end, because it is so hard to find interesting fruit in the winter in the UK. My son has just turned 13 and can eat more broccoli than the rest of us put together, if I let him (yes I have to restrict the veg so we all get some!). I guess tastes change as they grow up :-)
Monday, 08 April, 2013

Jo said…
I love the fruit chart. My 12yo did a similar exercise for her home economics class yesterday, and I realised we generally eat enough fruit, but could work on the vegie intake for the kids. More carrot, less watermelon..
Saturday, 13 April, 2013