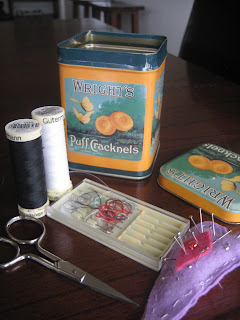 I have been reading Jen's Make Do and Mend Year which is a fun and crazy project to not buy anything new for a whole year. As you can imagine it is an idea after my own heart.

A couple of days ago she featured this nifty little craft project - a mobile mending kit with its own pincushion. What a fab plan, I thought to myself. All those buttons and tiny tears that need just a couple of stitches. Maybe a tiny mending kit would encourage me to actually mend. Right away that is, instead of throwing items into the meding basket to die.

Jen assures us that this is a super quick project that only requires a glue gun, to glue the pincushion onto the jam jar lid. I chose a jar, but the glue gun is out in the shed. Yes, that shed ten steps from the back door. The scrap fabric and stuffing is in the other shed. That one right at the end of the garden. And it is raining. Now you may think that I lack perseverance and a commitment to the spirit of crafting, and you would be dead right, but I decided there must be an easier way. And there was.

On the kitchen bench was a small tin I had disinterred from the shed a few weeks ago. I had emptied it of all those treasures I had been carefully hoarding for years (old magnets, pen lids, bread tags), washed it out, and it was sitting there performing no function except as a conversation starter ('What are Puff Cracknels exactly?' Anybody?)

And then I had my revelation. It was destined to be the No Craft Mobile Mending Kit Container. I raided the sewing box, and found a mini needle kit that belonged to my Grandma Hazel, a pair of embroidery scissors that were Grandma Muriel's (my grannies had the best names), and a pincushion that was lovingly made for me by.... ahem ....one of my very dear girls (yes, I am a bad mother).

It has now gone to live on the bookcase, right in front of the Jane Austen collection, which I feel is appropriate. I am sure she was very good at mending. 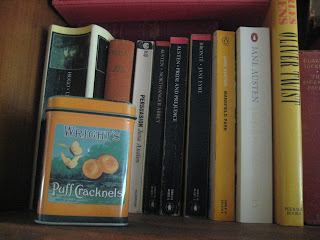 Now, if only someone would have a button emergency, I could come to the rescue, immediately...

Heather said…
Love the tin. I was at Target the other day and saw a portable sewing kit in the dollar aisle and thought about getting it. A dollar? Why not? I often wish I had such a thing in my purse to fix little tears or loose buttons while away from home. Then I realized how ridiculous that was when I have an abundance of needles and thread and what-not at home and why spend a dollar when it would be so easy to just put together myself. I still haven't done it, but your post might just motivate me. Maybe.
Friday, 22 March, 2013

Jo said…
Love that 'maybe'. That's what most of my projects are hedged about with... but I applaud your sentiment. It's not about the dollar, is it, it's about using our current resources to the full, not wasting what we have. Our grannies would be proud.
I have seen sites where people put together little emergency kits in altoid tins (I am assuming these are American mints?). That would make a nice handbag kit. Or those dozens of tiny Chinese fabric purses that seem to spontaneously generate in my girls' rooms. I might use one of them to pop in my handbag. Maybe..
Friday, 22 March, 2013

Anonymous said…
Aghghghg! Jo?! Are you actually me but on the other side of the world?
I too procrastinate about crossing the room to pick up a glue gun - just the thought of waiting for it to heat up depresses me enough to stop a craft project dead in its tracks.
The hilarious thing is I read this and was like. Man I totally want a mobile mending kit. But I have to face up to the truth that if I can't be bothered to make a mending kit then I'm unlikely to actually, you know, mend something.

As usual you have inspired me. I must go make a no craft mobile mending kit. Right now... well after a cup of tea perhaps.
Sunday, 20 October, 2013