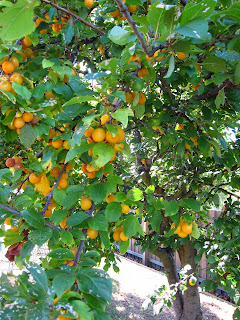 Absolutely the most difficult part of sending the children to school for me has been... school lunches. Packing those lunchboxes is fraught with pitfalls, not the least being What Other Children Eat. If you believed my girls, every other child in primary school has a lunchbox filled with chips and lollies, or if not that, at least every other item comes in a darling little plastic packet. Which may or may not be true.

Our biggest arguments are over muesli bars  (I sometimes give in on that one) and those horrible fake-flavoured 'fruit' rollups, which come rolled up in a sheet of plastic, in individual plastic packets, and also taste like plastic, and have no recognizable ingredients in them. So I flatly refuse to buy them, because, as we all know, I am a mean mummy. I do try, however, to make acceptable, non-plastic-encased substitutes. So far I have failed miserably on the muesli bar front, so when I decided to give fruit roll ups a go, it wasn't with any great sense of optimism.

The other reason I wanted to try fruit leather was our prolific cherry plum tree. There is only so much jam you can make, of plums you can force on friends, and Waste Not is this year's motto, so I went to work. 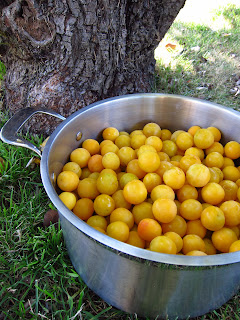 
There are much worse things one could be doing on a summer's morning than picking plums. There were mini parrots squabbling in the branches, causing the plums to practically rain into the pan. 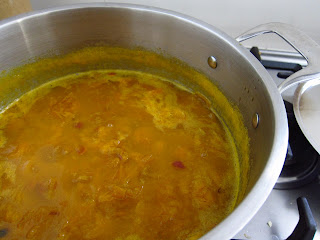 Due to the plums being quite small and almost all stone, I boiled them up stones and all, no water, just mashing the plums up a bit with the potato masher. According to information from the aptly named Sally Wise on local radio recently, you musn't add sugar to fruit leathers as it makes them go all brittle and cracked. But two teaspoons honey are apparently OK, so I added that. I simmered it for half an hour or so till the liquid reduced quite a bit, and the skins were completely translucent. 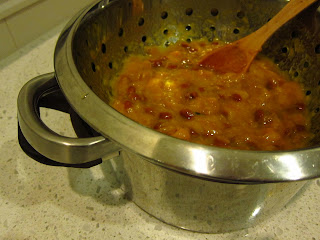 ﻿
﻿
﻿
Then I drained the mixture through a colander into a clean pan until only the pulpy mixture was left. 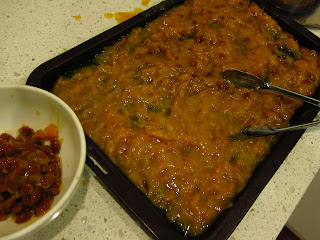 That I spread out on my largest baking tray to pick out the stones with a pait of tongs. It was very tedious, and I was thinking how nice it would be to make this with fruit with no pips. 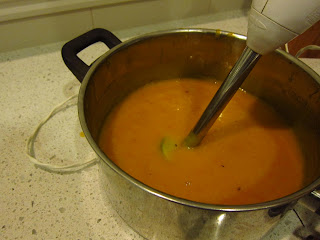 Then tipped the pulpy mixture into the drained liquid and blended it up with the stick blender. At this point it looked just like pumpkin soup, and tasted very yummy. It would have made perfect baby food. 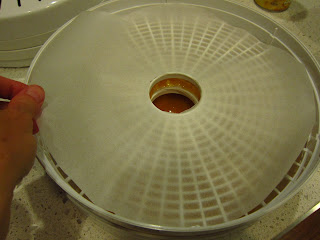 This was the point I was a bit dubious about. I lined the old Sunbeam dehydrator with baking paper and was hoping not to overheat the motor and blow it up. The Man, who knows everything about everything electrical said he thought it would be fine, so I ploughed on, cutting dinky circles out of baking paper..
﻿
﻿
﻿ 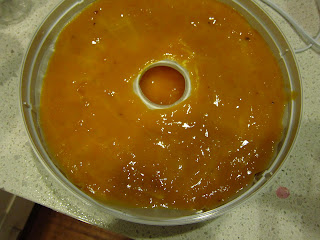 ﻿
..and spreading out the puree. It was the texture of thick pumpkin soup, so stayed nicely where I put it. 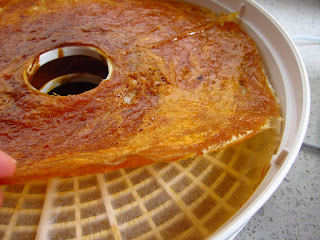 After about five hours the first layer was done. It peeled easily off the paper when it was 'cooked' all over. The layers that weren't quite done had patches that stuck to the paper. I find that these dehydrators dry a bit unevenly, so you either have to swap the trays around frequently, or take the food out one tray at a time, which is what I do. Apparently you can dry fruit in the oven as well, on the lowest setting, overnight, but I haven't tried it. Has anyone else had a go at that? I took the last tray out of the dryer ten hours or so after I started (I just left it off overnight as I didn't want them to dry to a crisp, and started again in the morning). The Man worked out that I had used about 70c worth of electricity, which was the cost of the whole project. Well, that and some baking paper.. 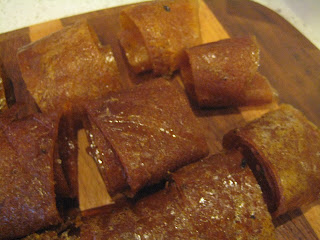 And here is the end product, ready rolled for the lunch boxes. And the miracle is - the children like them! They take them to school. Their friends like them, so they take extra. The Man eats them when I'm not looking. They are divinely delicious, and a tiny bit sour, like the plums. Unfortunately, they are so fab, that a week later, there aren't any left. Still, now I've begun I can forsee a year of fruit leathers, to go with the year of jam. Apples and pears are next, and they don't have stones.﻿
Edited to add: I forgot to mention - spray the baking paper with cooking spray, so the leather peels off nicely. This was also a suggestion from Sally Wise, local preserving queen. I might try one without the spray next time to see what happens, but I uncharacteristically followed advice this time, and it certainly worked!
﻿
﻿
Labels: food garden growing food home made local food lunchboxes not shopping reduce packaging thrifty waste not

Heather said…
Those look great. I don't have a dehydrator. A few years ago I tried to make fruit leather in my oven, since I also refuse to buy those sugary fruit roll ups-cavities anyone? It was a disaster.
Saturday, 02 March, 2013

menopausalrunninggirl said…
You may have just persuaded me to buy a dehydrator! These look nothing like those horrible stringy nasty things in the shops!
Saturday, 02 March, 2013

menopausalrunninggirl said…
You may have just persuaded me to buy a dehydrator! These look nothing like those horrible stringy nasty things in the shops!
Saturday, 02 March, 2013

Anonymous said…
They look yum, Jo. But as a working mum, my kids were one of those "all the other kids have" type. I would pack a sandwich, a piece of fruit, a small packet of chips or Pizza shapes and a bought muesli bar. Sometimes I would bake something - a muffin or our fav muesli bar recipe. Unfortunately I lost the muesli bar recipe but it was a winner. And sometimes even the fruit was put in those little plastic bags - cherry toms, grapes etc. For a little while I bought the fruit rollups, but they are so sugary and sticky I couldn't stand the thought of the tooth rot and the sticky fingers. I just can't stand watching kids eat them, ripping and tearing away with a sticky mess in their hands (OK, maybe it was just my kids). So while packing them in the school lunch meant I didn't have to see them eat, the thought/guilt of the tooth rot was not so easy to avoid.

The thing about baking very irregularly is that one's children become so much more appreciative of it. They beg. They oh and ah. They say thank you and "that was so delicious". Keep 'em keen, I say.

Jo said…
Lucinda- ha, more time to read. A definite consideration in everything I choose to do, or not. My aunt once took a photo of me reading while stirring the custard!
Mrs Frantic, I love my dryer - bought it secondhand from the paper years ago, and I dry heaps of fruit in it, mostly apples, for winter snacks.
Heather, so sorry your fruit leather experience was a disaster. I hate cooking disasters, they make me cry, especially if lots of preparation was involved..
Saturday, 02 March, 2013

Left-Handed Housewife said…
I lack the dryer to make these, but I may invest in one this summer to dry fruits ... and make roll-ups, which I also won't buy for my kids.

I hate packing lunches. I have no lunch imagination and on the rare occasion when I try to get creative, my children reject it. Really, they should make their own lunches. One of these days ...

Jo said…
Frances, my oldest child packs his own lunch when he needs to. He is 19. The girls? Seriously, most days you would think they had never been to school before, the amount of panic and carry on that happens before they leave the house. Still, maybe I should harden up and let them make themselves useful. They do bake for school lunches, but not what I would call healthy..
Saturday, 02 March, 2013

GretchenJoanna said…
What an inspiring success story! We have cherry plums from which I made quarts of pancake syrup by the method you started your process with. Even though everyone loved it, we still had quarts left when the pancake-eaters were all gone. But it was yummy!
Sunday, 03 March, 2013

Jo said…
Yes, I have made pancake syrup with those cherry plums too, except I meant it to be jam! However, we'll settle for the pancake syrup. It is very yum, and so much cheaper than imported maple syrup.
Sunday, 03 March, 2013