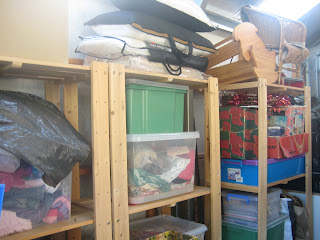 So remember when I was cleaning out our disgraceful shed, and I had visions of everything stacked neatly on wooden shelves. Well, like most of my life's projects, I'm nearly there on this one. The Boy did, indeed, put the shelves together, and everything came out of the shed, I decided whether I could live without it, and lots of it went back in again.

BUT, even though the shed is still relatively full, there is order, not chaos... and, if you look carefully, there is actually a pedestrian walkway around that carefully stacked island of boxes. 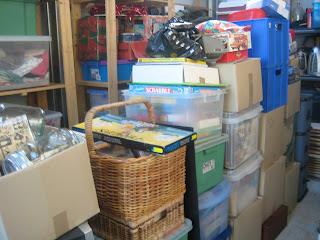 
And there are plans afoot to make that Manhattan of misguided storage actually go away. All the boxes and crates at the back of that pile are books and games that will go downstairs when we have built some storage for them. Actually, I have bought a lovely games cupboard, but we have a Japanese exchange student coming to stay next week, and I thought I would give her some cupboard space. So at the end of next week, some of those boxes will have gone. And the boxes and baskets at the front of the pile are our enormous collection of ex-homeschooling resources. I am going to have a book sale and give away evening with them for my local homeschool group.. sometime. I have been saying this for about two years now, but at last everything is together in one place, so it is all the more likely to happen.
One of my great difficulties in decluttering is moving things to their next destination. I can let things go quite easily, but then I feel like a have to find a significant home for them. It is very hard to just drop them off at the charity shop. I need someone to appreciate them. You know how some people need everything they buy to have a significant story? Well, I need that closure for everything I give away.. it's ridiculous, but there you are.
So far, I have sent a carton of books with a friend to Nepal, where it will wend the last few hours of its journey up a mountain track on someone's back until it reaches a tiny primary school to be the nucleus of its new English library. True story, and an immensely satisfying next home for lots of gorgeous books.
I have sent two booster seats, a pusher, sheets, towels and bags of clothes to a Refugee Welcome Group at the Catholic Church where one of my friends volunteers.
I will be taking a bunch of defunct electrical items to the recycling centre at the dump.
I discovered that Posy's class is running the Lucky Jar stall at the school fair, and their request for jars had me joyfully filling up a carton with all the Moccona coffee jars that have been skulking behind the shed door.
And then I hardened up and took the rest to the City Mission Shop, because seriously, I need to get over this pretentious foolishness.
Meanwhile, I discovered the most exciting things while hunting through all our old stuff, and have been decorating the house with bits and pieces I had completely forgotten we owned. 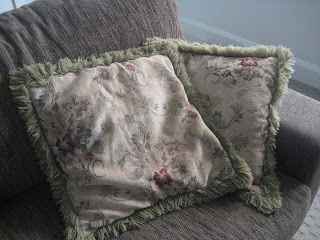 I was thinking I would have to go out and buy cushions for the new sofabed downstairs, but found these in the shed. I last used them when various of the children were toddlers, and they were quite grubby, but I thought I would wash them before I sent them to the charity shop, but they washed up beautifully, are several shades lighter now, so decided to keep them instead. They lend a nice nana touch to a very bland couch. 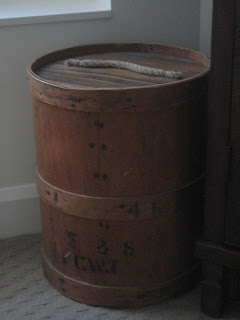 ﻿
This old flour barrel I bought from a secondhand shop when The Girl was a baby. We lived near a row of gorgeous old shops in Port Adelaide, and The Boy and I would go for walks with The Girl in the big old English pram, and one day I found this and had to put it in the pram and carry The Girl. The Man made the nice lid with the rope handle, and for years it has been sitting in the shed, full of cushions. It is now downstairs next to the new games cupboard. I may fill it with a stack of jigsaw puzzles. 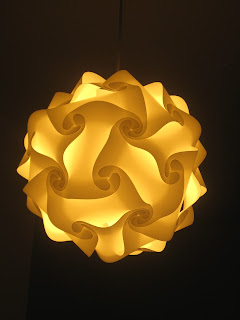 This is The Girl's new light fitting. The Man and I bought two of these from a market several years ago for the children's rooms. They came in a kit form, just a whole heap of identical plastic pieces that you fit together. Of course, we lost the instructions, The Boy tried to make his but got really mad and threw it away in a temper. Then I got really mad because he threw it out... anyway, The Man finally worked it out a couple of weeks ago with Rosy's 'help', and now at last we have one up.. 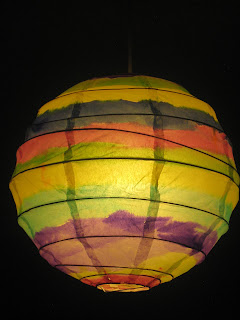 Then of course Posy wanted a nice light fitting too, because actually, they have all just had bare bulbs since their rooms were finished. Like prison. All I could find was one of those plain Chinese paper shades. It was very old and nasty and fly-spotted, so I hung it up over newspaper and set Posy up with her watercolour paints, and she made a gorgeous rainbow masterpiece, which rather surprised us all really. Here it is in the day time.. 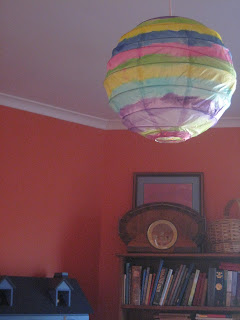 ﻿
﻿
﻿
It is so much more lovely than anything I could have bought.
And last of all, that birthday present for my brother I mentioned in the original post - I can show you now, since I eventually did manage to get it to him, only several weeks after his birthday.. 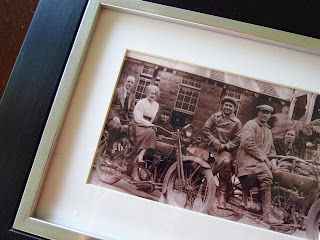 My brother spends a lot of time doing up classic motorbikes in his shed (because his isn't full of random junk), and I found this photo of our great grandfather (on the right) on his new Harley Davidson, circa 1915, looking ever so fetching in his riding gear, like Toad of Toad Hall (poop, poop!).
So, treasures from that shed, basement, attic. Don't overlook what you already have. What have you found in yours?
﻿
Labels: decluttering not shopping waste not

Left-Handed Housewife said…
I like the idea of Lucky Jars very much, even though I don't know what they are. I bought a jar full of Cracker Jack surprises at a flea market once, and I still have it somewhere.

I've found nice lampshades in my attic, and art supplies I'd forgotten about. It's too cold to do attic work right now, but I'm hoping as the weather warms up to have a good day of sorting stuff to take to Good Will or put on the Freecycle list. I love the idea of sending things to suitable homes, but I fear I'd never get rid of anything if I had to take an extra step to place it altogether properly.

Heather said…
I sometimes joke to my husband that I have a hoarding problem. Not really, but I have a hard time parting with things, too. We have this out-of-control spare room in our house which serves as a craft/sewing room, a library, and an office that also holds the cat box (ew,stinky), an exercise machine, an extra twin mattress that we don't know how to get rid of, a bunch of fans we use during the summer, a huge hope chest, and a closet full of who knows what. It is actually depressing to go in there. I think I need to clean it out this Spring, if only for my sanity.

By the way, both of those lamps are lovely. That picture is fantastic, too. What a great piece of family history!
Tuesday, 05 March, 2013

GretchenJoanna said…
This is all so satisfying just to *read* about, I can hardly imagine how refreshed you must be, and energized.

I have that same problem of wanting my things to go to a Good Home if they are leaving here, but as I got older that took more and more energy to arrange. So I've managed to put more in the thrift store bag while trying to conjure up in my mind an image of The Right Person happening upon the thing as she browses the shelves. She spots My Donation, and immediately and enthusiastically blesses God (and me!?) for her good fortune in getting it for a good price. If it can happen to me, why should I begrudge the experience to a stranger?

Now that I've given a little pep talk, I should go right upstairs and do more of this kind of imagining....
Tuesday, 05 March, 2013

Jo said…
Frances, Lucky Jars - jars are filled with toys, lollies, marbles, whatever, and numbered underneath. You pay your money and choose a number, and you get the jar with the corresponding number. A school fair staple. Of course, if you wait until just before closing, they sometimes sell them off at bargain basement prices, and you get to choose your jar...

Heather, we have had a room like that in every house we have lived in. Then we moved here and we had a whole flat downstairs to fill up with junk. So we did. Such an enormous effort it was to get rid of all of that, and I was so ashamed of our mess and waste, which is why I am such an anti-consumerist now!

Gretchen Joanna, you always have a word of wisdom. I will be visualing that happy person buying all my precious junk every time I fill up the charity shop bags now..