Now it is Autumn, Summer Has Finally Arrived 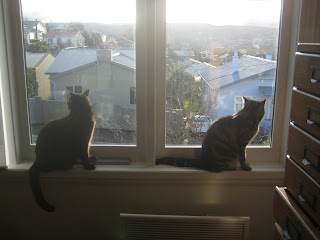 It is rather late and I am waiting for a bunch of pears and sugar and vinegar and various other ingredients to magically turn into chutney. The reason I am doing this at ten o'clock at night is because it is hot, hot, hot, and only now is it cool enough to justify hot pans of boiling liquid in the kitchen. Luckily, whoever built our house, either by accident or design, created a wonderful cross draught when the front and back doors are both open that draws cool air through the entire house. Of course, for three quarters of the year that leaves me yelling, 'Shut the door!' every five minutes, but in the summer it is marvellous.

One of my (self-imposed) jobs as Electricity Saver in Chief (in training), and House Custodian, is regulating the temperature of the house. On winter mornings I wait until the sun hits the front windows to open our double blinds and heat up the living area. In the afternoon I can open the front door for a couple of hours on a sunny day and wring a little more heat out of the atmosphere, until the evening draws in and I scurry around to make sure everything is closed up again against the cold.

Now, although it is officially autumn, we are in our warmest month here in Tasmania. The weather has finally warmed up and is the main topic of local conversation.We are always rather surprised that we can actually be TOO hot. Imagine that. Lucky we don't live anywhere North of here. Imagine being hot like this ALL summer. We don't know how they all stand it up there on the mainland..

I have to be up before seven to reverse the winter routine. Front window blinds firmly shut against the sun. Front and back doors open to catch the morning breeze before it gets hot. Bedroom windows open to air out the rooms, then shut again all day to create dark caves of coolth for after school skulking. Water all the vegetable pots. Back to mist the sprouting seeds during the day.

There is an uncomfortable hour around 4pm when it is too hot outside to let any air in, but getting stuffy inside, then, bliss, that moment when you open a window and the breeze has begun, and you throw open every window and door, except those two bedroom windows where the sun is still blazing, you know the ones...

So far, we have managed this summer with hardly any fan use, maybe only a couple of blazing afternoons for a couple of hours. One thing we have done right in our long renovation, is to add enormous amounts of insulation everywhere, and in a lot of places build new walls inside the old ones, thus keeping the insulating value of the old lathe and horsehair plaster walls as well. Downstairs, the front of the house is built against the slope of the hill, which keeps it at a fairly constant comfortable temperature year round.

It is very satisfying to be able to partly heat our house with the sun, and cool it with cross-currents of air and the bulk of the earth, some insulation, and me doing theatrical tricks with curtains...

Hattie said…
I think this post may have been written *specifically* to make me jealous. Do you know how cold it is in London? Spring. Pah...
Thursday, 07 March, 2013

Jo said…
Ah yes, but you'll be getting the last laugh in August, assuming you don't skip summer again this year in the UK. I'm sure you are due for a really, really hot summer this year, after nearly drowning the Queen last year..
Thursday, 07 March, 2013

Heather said…
I have similar routines for our seasons. In the summer I wake up before dawn, open all the windows and turn on the whole house attic fan (sounds like a 747 airplane) to encourage the cool outside air in through the house. Then as soon as the sun starts rising (along with the heat) I shut my house up tight, shades and all, and pray to make it past noon before I have to turn on the AC. Oh, joy...only a few more months before I have to start this up again. Seems like it was just yesterday. Summer always comes too soon.
Thursday, 07 March, 2013

e / dig in hobart said…
Jo you've described how we live here perfectly! chasing the sun in the winter months, hiding from it in the summer. it's been particularly crazy this year.
let's all cry out now : "we need some rain down here"!
Friday, 08 March, 2013

Heather, I am really intrigued by technology that moves air around without using a lot of electricity. Your fan sounds amazing. We are thinking of putting a vent in the bottom of our pantry to draw up cold air from under the house, and then venting the warm air into the roof space... also, here in Tas, which is mostly cold and damp, some houses have fans which blow warm air from the roof space into the cold rooms below. Does yours do that in the winter?

Anything to avoid those awful electricity bills..
Friday, 08 March, 2013