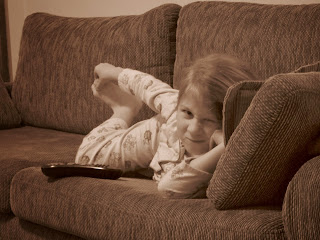 Random hilarious photo of Posy because both cameras have left the house.

Yesterday morning I woke up in a panic, having remembered (in a dream?) that Posy had a dance dress-rehearsal at 2pm, and her dance costume, which I had been meaning to tackle for, ummm, six months, hadn't been altered yet.

That is not something that you want to face at 7.45 on a sunny Saturday morning. I really, really don't like the sewing machine. It doesn't like me. Every time I use it.. maybe about once a year, I have to get the manual out again to remember how to thread it up, and fill a bobbin. Then the bobbin thread breaks half-way along a seam, or I sew the wrong bits together, and every single time I put the pins in the wrong way, then sigh loudly, and have to take them all out and turn them around before continuing.

Naturally, I spent most of the morning procrastinating. I made pancakes, I read Harry Potter to Posy, I did some weeding, read me some internet, and ironically, some more of my current book Radical Homemakers.

Finally, at midday, I sat down at the sewing machine. Posy's dance teacher had accidentally ordered her a costume that was a size too large. From the US. Really? We have a local dance shop, and lots of talented dressmakers. Rosy's ballet school uses locally-made costumes, and reuses them year after year, so we rent those, and so far I have managed to get away with altering costumes by using safety pins and optimism. Posy goes to a simple little dance school within walking distance, only one lesson a week, a gorgeous teacher, but we have to buy preordered costumes. Sigh.

Anyway, here I was with one costume that needed two inches taken out of its middle, and another one that needed its legs shortened. And two powder-blue fingerless gloves that were designed for a child without twig-like arms. They kept flying off across the room during rehearsal. It took me over half an hour to work out how to cut two inches out of the middle of the leotard and reattach it to the skirt seam. The whole time I was very grumpy at myself, because I had had six months to take it to a dress maker to alter it, and hadn't, and I could be outside in the garden RIGHT NOW if I had been more organised. I finished clattering the last seam (I wonder if that sewing machine should be clattering?) approximately seven minutes before we were due out the door. They fit! The costumes FIT! There was happy squealing and jumping up and down.

I still really don't like sewing, but I feel so good. I actually did a sewing job, and it worked! I fixed a dance costume. Don't you love that moment when you feel like a really good parent?
Labels: buying local children mending parenting

Unknown said…
Arhhh Procrastination, is a familiar friend to us all. Posy wouldnt have remembered if you had taken it to a seamstress and had it done BUT she will always remember you sitting down with her costume and making it perfect, just for her. Well Done Mum.
Sunday, 27 October, 2013

Anonymous said…
None of your Saturday morning activities sounded like procrastination to me!

And you clearly deserve a good mother medal.

I don't own a sewing machine. Why set myself up to battle a thing whose kind have always hated me, since 2nd form in the late 70s?

Yet being in a family of boys who have fewer skills in the stitching business, is good for my ego. My value rises with every button I reattach. Sometimes I fall for my created myth of being the seamstress of the house and think I will buy a sewing machine. Then I remember. I can't sew.

And look at your time management skills. You had time to spare before you had to leave!
Sunday, 27 October, 2013

Jo said…
Lynda and Lucinda, you both make me feel so good. This is why I have a blog! Yes, I am a wonderful mother with great time management skills. I will repeat that mantra every morning!
Sunday, 27 October, 2013

Tammy said…
How wonderful that you were able to do it yourself. Although it was frustrating, I'm sure you had some well-deserved pride at accomplishing the feat. And it fit!!!!

I also normally tackle a sewing machine one a year. Bobbins are mystical creates that cast spells against me. And who the heck came up with the threading guides for the top of the machine? Could it be more complicated?
Monday, 28 October, 2013

Heather said…
I'll bet that satisfaction lasted with you throughout the rest of the day. I'm a procrastinator too, but when I finally do something I've been avoiding, I end up feeling pretty great.
Monday, 28 October, 2013

Anonymous said…
I am trying to stiffle my laughter with both hands but I need them to type with so hoping that Steve can't hear my chuckles. I just got a fit of the giggles thinking about Posie's blue gloves shooting off her hands and flying across the room :). I HATE sewing. I love the possibilities but can't get my head around the act. I have an uber talented daughter (Madeline) who taught herself to sew and who sews intricate and complicated costumes etc. sans patterns so whenever I need something sewn STAT! I go to her on bended knee. A hearty "KUDOS" to you. There is NOTHING like that moment where you have been furtively working on something for your kids (usually "costumes" at school in my case) and it heads out the door covered in glitter and twinkling (or in my son's case, covered in fake spiders webs and glow in the dark plastic blowflies or in one case, he wore a cardboard box building complete with windows etc. and plastic Barby and Ken dolls hanging out of the windows with fishing line while he was inside the box (head out) dressed entirely as Godzilla...the things we parents have to go through to accomplish our children's dreams!!!) aside from that absolute relief coupled with complete adoration that closely follows the act of giving birth to said children (more relief now that I come to think of it but nature is VERY clever to couple the two ;) ). Eggs on their way today. Have a great week :)
Monday, 28 October, 2013

Jo said…
Tammy, I know. Sewing=scary. And I was so surprised that I made an item of clothing fit better! I was hoping for that, but not particularly optimistic!
Heather, everything feels so much better when stop procrastinating and just do it - you'd think I'd have learned that by now...
Fran, I love the sound of those fantastic costumes, esp. Godzilla. Brilliant! Thanks for lovely eggs!
Monday, 28 October, 2013

Linda said…
Oh I loved your blog post! It took me back to when my daughter, now 36! did tap and ballet lessons. Every couple of years they did a SHOW at a local theatre and Mums were expected to make the girls's costumes. In those days I did not sew ( I am now miraculously transformed into a born-again quilter!). My mother in law kindly donated her old sewing machine which drove me nuts. The bobbin was nearly impossible to access and, like you, I was always consulting the manual. The dance teacher Mrs Petit always told Mums that the costumes were SO simple, that she would supply the patterns etc. One year we had to make proper ballet costumes, 12 pieced satin bodices, fully lined using a paper pattern cut from a greengrocery brown paper bag. Thin shoestring straps and several layers of net for the skirt. A fellow Mum and I despaired over the costumes, continually ripping out seams and redoing , fighting with slippery satin. A few years ago we were both reminiscing about this particular costume when we both discovered we still had the ballet dresses in our wardrobes, we could not part with them after we had spent so much blood, sweat and tears making the wretched things. My granddaughter now does ballet. Perhaps she will wear it one day?!
Monday, 28 October, 2013

Anonymous said…
I'm giggling my head off too but as one who likes, nay loves sewing I giggle from the other side of the fence. I too would have procrastinated, woud have panicked and probably bodged it up! Well done getting it done and first time too. You should be proud of yourself! Now, as an idea, teach the girl, Rosy and Posy to sew. ;) Never too young to learn. I was on my grandmothers old singer machine (it could straight sew and darn!)
from when I was about 6. Barbie clothes were my starting point, then some MC Hammer pants for me. :P
Monday, 28 October, 2013

Jo said…
Linda, my blood is running cold at the thought of sewing a tutu - there are mums at Rosy's ballet school who do such things, and I regard them with such awe! I do hope your grandaughter gets to wear that costume. One of the little girls at Rosy's school finally grew into the cream satin tutu that her granny made for her mum at the same age, and she wore it to the most recent dance competitions. Just wonderful to have that connection. And tutus never go out of style!
Jessie, one of the many reasons my sewing job took so long is that Posy 'helped'. Oh lordy! But of course it is the same process as having them 'help' in the kitchen. It drives you to drink for the first few years, then they can cook better than you, and you can retire.... (well, that was my dream, hasn't quite happened yet. They can cook beautifully, but often choose not to....).
I hope you still have those pants!
Monday, 28 October, 2013