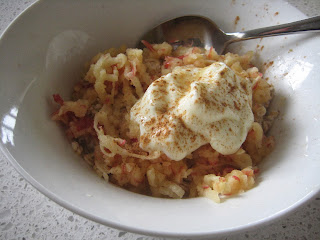 Yesterday in the comments after I complained about my healthy porridge tasting like gloppity-glop, Fran suggested Bircher muesli instead, which is basically uncooked porridge, if you haven't tried it.

Half a cup porridge oats soaked overnight in three-quarters of a cup water/milk/apple juice, or as Fran suggested, magical kefir milk. I also added a squeeze of lemon and a pinch of salt.

In the morning add a grated apple (traditional) or any other fruit you can lay hands on. I also added natural yoghurt, cinnamon and honey.

This was actually MUCH better than porridge, in my opinion, because it isn't gloppy. Also, it feels like you are eating a very healthy breakfast, which gives a sort of hallowed, wholesome glow to the morning (right up until the point where you eat cup cakes for morning tea..). I made mine with water, which even with the lemon was a bit bland. Tomorrow I might try apple juice. Also, Jen mentioned in the comments that she adds minced ginger to porridge. I keep a ginger root in a tub in the freezer, and grate it straight from frozen. I might try that too. And more cinnamon. I am looking for a breakfast flavour explosion. Will keep you updated.

Does anyone else make this for breakfast? Thanks to Dr Bircher, and the lovely Fran for bringing me this healthy morning treat...

Edited to add: The addition of grated ginger a definite winner! Also apple juice good for soaking the oats, but I have decided a ratio of 1:1 is better for oats to liquid. Half a cup oats to half a cup liquid is a good, filling breakfast for me. And the salt is important. Don't forget the salt. I don't think there is anything else as bland as oats..
Labels: breakfast food recipes

Anonymous said…
:) Glad you liked it. Try adding some nut butter and a few dried fruits. I would add the fruit the night before so it was nicely soaked the next day and if you add chopped nuts to the brew the night before they plump up and add a lovely crunch and are more digestible soaked. I usually eat apples that I have cut into slices for breakfast with half a cup of whole almonds and a huge mug of tea. Keeps me going for ages :). I am not a natural breakfast person but since I added breakfast to my repertoire I have managed to lose 20kg so I figure best keep at it! ;)
Saturday, 05 October, 2013

I don't eat Bircher muesli but whenever we go to a resort or hotel that has this on the breakfast buffet my husband loves it, especially with yoghurt. He also makes his own muesli with tonnes of nuts and rolled oats (not the quick cook ones)and then soaks his muesli for 30 to 60 minutes or more every morning.

I've cut my small glass of juice in the morning. All sugar! And will replace it with a cut piece of fruit. (Trying to get more fibre.)

And Virtuous One (that's you Jo!) what healthy start! You could add prunes for their iron. (I think you know you've become a certain age when you like prunes. I hated them for most of my life. My mother and mother-in-law love them. And now I love them. BTW the other test is swimming. If the water is nearly always too cold or you swim breast stroke to keep you head dry, you're a woman of a certain age)
Saturday, 05 October, 2013

SarahN @ livetolist said…
Yummy! I usually have hot porridge with frozen berries for breakfast. If (for whatever reason) the BF needs company in the kitchen in the evening and I have nothing to do (rare!), I'll make bircher muesli. It is then a grab and eat (rather than the two minutes cooking). Though the cooking time is usually 'put away the washing up' time - I pretty much refuse to dry washing up!! So it sits overnight... I have to admit, I can't often be bothered grating apples (I own a food processor for almost all my grating). But I should do it, it makes it so yummY!
Saturday, 05 October, 2013

Jo said…
Oooh, Fran, yes, dried fruit. Put unsoaked sultanas in this morning, and the grated ginger was brilliant.
20kg? Clearly you are doing a lot of things right then!
Lucinda, I am so a woman of a certain age. Love prunes! Will definitely be popping some on the next load of muesli. That is a great idea of your husband's. The Girl makes brilliant toasted muesli, I could just soak that.. And yes, the breaststroke... I swim with a friend in the summer, and her lippy is still impeccable when she hops out! Mine would be too if I wore it..
Sarah, grating apples, yes, a pain, but apparently you can store Bircher muesli over a few days and it keeps tasting better as the flavours meld. Will have to try that once I get the recipe perfected!
Saturday, 05 October, 2013

Tammy said…
I never even knew uncooked oatmeal was a thing! I might have to try this! I guess in my head I first thought it would be soggy, but I like cooked oatmeal, and it sounds like this has more texture, which is always a good thing.

Thanks for the new breakfast idea.
Saturday, 05 October, 2013

Jen's Busy Days said…
I used to soak my bircher muesli with half juice, half milk and then add fresh or frozen fruit in the morning along with a small handful of nuts or seeds. The dollop of cream I sometimes add isn't so healthy but oh so yummy with cinnamon sugar too. :-) There are a gazillion ideas to go with so have fun!

Jo said…
Tammy, definitely less gloppy than porridge. Give it a go!
Mmm, Jen, so many possibilities! I think cinnamon sugar might be taking it to the realm of very naughty breakfast indeed!
Saturday, 05 October, 2013

Barb. said…
Oats is way nicer than porridge. I make up a big jar of oats, milk powder, bran or wheatgerm, sometimes dried fruit and nuts but only in the weeks after a big shop...1/3 cup of oatmix, pour boiling water on and let it soak while I have my first coffee. Sometimes add chopped apple, sometimes sultanas or honey, depends how I feel. Prunes = yummo.

Jo said…
Barb, that is an interesting idea, putting your favourite mix in a big jar. I can see there is much experimenting to do!
Sunday, 06 October, 2013

Anonymous said…
I make my own muesli about once a month. It's a testament to my mad packet opening skillz - rolled oats (not homebrand, not instant), bran - either sticks or flakes, flaked almonds, coconut and whatever dried fruit takes my fancy, mix it all together and eat. I have it with greek yoghurt and stewed fruit. Is good.

e / dig in hobart said…
love my oats, don't feel healthy and right if i haven't had them. i have natural oats mixed with whatever dried fruit and nuts i feel like at the time - sultanas, prunes, almonds, walnuts - then a good shake of cinnamon, and then stewed fruit or a banana, and zapped in the microwave with soy milk just to take the chill off. or not, if it's the warmer months. never tried bircher because i just love my own natural oats so much! it fills me up and is a great start for the day.
Monday, 07 October, 2013

Barbara Good said…
Oh I have so much trouble with breakfast, for both me and one of my daughters. The other could eat bowl after bowl of any type of cereal. But Miss Four and I are not breakfast people. I know it's super healthy so I force us both. We tried the porriage - yuck!! - but this sounds a lot nicer. I have made it once before for Mr Good and tried a bit myself, nice but still not my thing. Now I manage a smoothie with fruit, yogurt, seeds, honey and almond milk or some sourdough with vegemite and Miss Four has a jam and butter sandwich and Miss Two eats whatever we leave.
Tuesday, 08 October, 2013

Jules said…
I absolutely love this - have had it for the last 3 mornings (was getting v bored of porridge!) and it really feels like a healthy (but delicious) start to the day. Thanks so much for posting! My girls even tried it this morning, so who knows, maybe they'll be converted too!
Thursday, 17 October, 2013

Jo said…
Lots of people loving their oats! Jules I'm so glad you liked it. My girls have so far regarded it with much suspicion, but you never know, one day they might give it a go!
Thursday, 17 October, 2013