This Goes With That.. 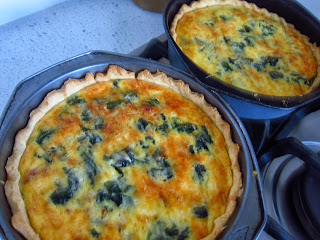 One of the excellently interesting things about cooking day in, day out, is how recipes start to become familiar, the patterns of food and the way ingredients go together start to emerge from a seemingly random universe of recipes.

One of these 'ah' moments came when I realised that the process of making pastry is the same as whipping up a crumble, or making a number of biscuit recipes. And any recipe that involves rubbing butter into flour can be whizzed up in a minute in the food processor. When you make these connections, you have routines, and when you have routines, producing food day in, day out becomes a much simpler process.

A routine that I follow about once a fortnight is this: make two quiches, one to freeze, then make two batches of ginger biscuits, also one to freeze, and do this all using the food processor. The recipe for shortcrust pastry is so simple - a 2:1 ratio of flour to butter. I use 260 grams flour to 130 grams butter for two quiches, which I make in 20cm cake tins. Tip flour, butter, and a pinch of salt into the food processor, whiz it up. With the motor running, add 1/3 cup cold water until the mixture forms a big, clumpy ball. Shape pastry into a ball, refrigerate it for 15mins or so. Roll it out - I just do this straight on the bench, and line the tins.

My quiche filling recipe comes from Stephanie Alexander's Cook's Companion. Best recipe book ever. Two quiches require four egg yolks, and four whole eggs, whisked up with two cups of cream, a pinch of nutmeg, salt, pepper. Grate a bunch of cheddar cheese and put in the bottom of the pastry case, along with whatever other fillings you can find. I am currently using lots of greens from the garden. Tip in the egg mixture. Pop in the oven at 200C for fifteen minutes, then 180C for half an hour. Num, num. Even better next day for lunch.

Now don't wash up the food processor just yet, as we are about to make ginger biscuits. This recipe was from a library book on traditional English dishes, these are from Cornwall, traditional except for the method, which probably didn't originally include the use of a food processor.

(I use metric and imperial measures when cooking, as my scales show both, and I am lazy)
I double this recipe, because what is the point of making one tray of biscuits?

Throw all of this in the food processor, whiz it up.
Add 3 tablespoons of warmed golden syrup while the motor is running until the mixture firms up to a consistency that you could make balls out of it. I sometimes need to add a little water.
Shape into small balls, flatten with fork, bake at 190C  for 10 mins after the quiches come out. Cool on racks. 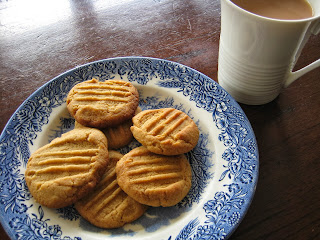 Try to save some for the next day...

Now, if you are feeling enthusiastic, you can whip up some macaroons from the four left over egg whites. Or persuade someone else to..

SarahN @ livetolist said…
Meringues also, with the egg whites. I have a two week old bowl of them in the fridge... wonder if they are still good? I should just try! The problems with the meringue is the cool slow oven business...

And we're having quiche for dinner with packet filo pastry. The BF thinks it's strange, it was all I knew at my parents!
Thursday, 17 October, 2013

Jo said…
Meringues actually whip better with week-old egg whites. I'm sure two-week old egg whites are even better! As long as they don't smell, they should be fine.
I must say, there is no way I would be making pastry without a food processor. I hate rubbing in butter!
Thursday, 17 October, 2013

Left-Handed Housewife said…
I well remember the day when I learned you could make biscuits and pie crusts using a food processor. Changed my life! My pie crusts are still aesthetically ... questionable, but they come together so much more easily.

Anonymous said…
Or friand...they are a lovely way to use up leftover egg whites and something special to add to a nice cup of tea the next day. Cheers for the recipe for gingernuts. I don't own Stephanie Alexanders tomb of a book because it was WAY too expensive for me to even consider buying. My sister has it (and has barely used it) and prefers Maggie Beer's sour cream pastry but I tried making it (recipe source online ;) ) and it was an abject failure. I will give your method a shot if my long suffering food processor is able to rotate long enough (before going up in a puff of smoke) to mix it. I think I might have done it some severe damage when I tried to make raw almond butter and ran it for 20 minutes straight. That will teach me to be sidelined by "extras" rather than homing in on a brand that I knew and loved when buying it. Cheers again for the recipes :)
Friday, 18 October, 2013

Jo said…
Frances, I love those 'changed my life forever' moments. Especially in cooking, because what could be better than to get it over quicker...
Fran, I blanch at the cost of almond meal, because I know how quickly my family would inhale friands... maybe when they all leave home!
I acquired my food processor via The Man's frequent flyer points. I figured there ought to be an upside to his constant absence!It is a stock standard Breville, and has lasted well, but then I have never tested its mettle on almond butter!
Friday, 18 October, 2013

Bek said…
I do a similar thing with an ods-and-ends frittata - anything that needs to be used up goes in, along with whatever is good in the garden and the eggy custard mix. I just find it that bit easier than getting over the pastry making hurdle which stops me from making quiche. Even though I know its just a step in the food processor, roll and bake, it just seems too hard. But you have inspired me to up the anti and do quiche.
Friday, 18 October, 2013

Jo said…
Frittata is good Bek, but my family are suckers for buttery pastry, and I am a sucker for my family! It also holds together well for lunchboxes the next day if there are leftovers. But seriously, if it was just me, I'd go the frittata too. Because we all know where buttery pastry ends up, don't we?
Friday, 18 October, 2013

Tammy said…
I have forgotten all about quiches. I love them, and they are not all that difficult to make.

Thanks for reminding me such a wonderful meal option!
Friday, 18 October, 2013

Anonymous said…
Yum! I make quiches regularly but like Sarah, I use bought pastry. Though I don't use egg yokes, just whole eggs.

I have a food processor ion my Christmas wish list. Can't wait. I will make my own pastry.
Friday, 18 October, 2013

Jo said…
Tammy, quiches, I could eat one every day! Lucinda, the egg yolks make it richer and creamier. MMMmmm. Stephanie is the bomb.
Friday, 18 October, 2013

Anonymous said…
Wow. I am super terrified of pastry but (as I'm sure you've guessed) I am a bit addicted to making crumble. This post could change my life. - now all I need is a food processor and space in my kitchen to store it.

Hmmm. I may bookmark this to revisit when I have sorted my kitchen woes out. Great tips for multitasking in the baking department. Now you write it down it makes so much sense.
Sunday, 20 October, 2013

e / dig in hobart said…
i'm sad i only just found this post! this is the kind of baking my mum does, lots all in a row.
and i'm with you - pastry is so easy in a food processor, it makes everyone think you're a genius when really, the machine is doing it all for you.
um, so why don't i make it more?!
great post, jo!
Tuesday, 22 October, 2013