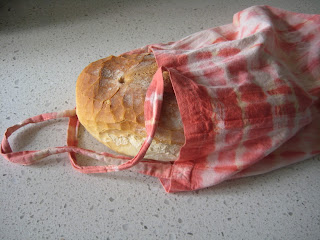 Hands up who DOESN'T have a giant collection of reusable bags stashed in a cupboard somewhere? No, didn't think there'd be any hands. I recently disinterred a whole breeding colony of them from on top of my wardrobe, and brought them out so I could see the sorry, tatty state of them all. I haven't thrown any out, because I figure eventually I will run out of plastic bags, and then what will I take stuff to the op shop in? But it is a pretty sad collection. Still, I rescued some that are less sad than the rest.

My new bread bag, above,  bought from a market many years ago. I gave it a nice hot wash, and took it down to the deli, where they happily popped the bread straight in the bag. Yes, white bread. I am breaking in the family slowly. First, slice your own, then we'll work up to wholemeal..

Next I found a string bag, for apples and oranges and such. 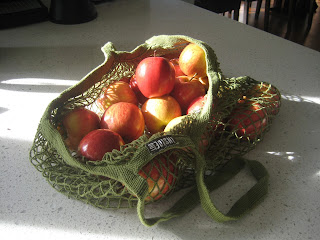 Old storage for apples at the bottom of the fridge: 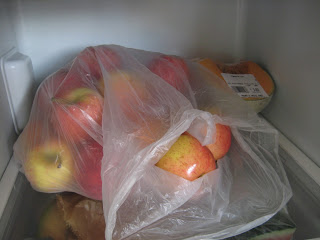 New storage for apples at the bottom of the fridge: 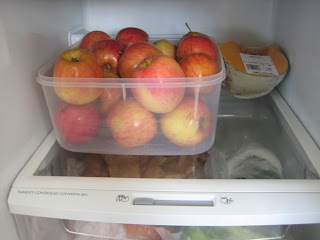 It is a large cake box. So if I want large cakes AND apples, something will have to give. And yes, look at that plastic-wrapped pumpkin at the back of the fridge. Will I have to start buying whole pumpkins? 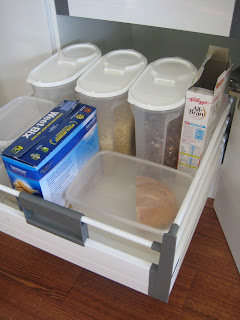 Takes up the exact space in the cupboard that a plastic-wrapped loaf did, but is much neater. Win! 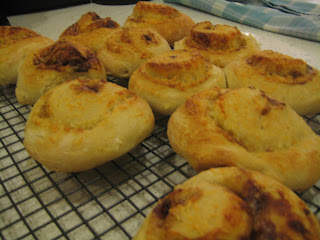 Cheese and vegemite scrolls. So easy to throw in the lunchbox in the morning. Stored in a plastic tub in the freezer.

So, some wins, no? Well, cue to my conversation with the butcher this morning. I brought in my Pyrex dishes again to be filled, which he did, but then I wanted some bacon and ham. Now it is sometime since I have bought bacon and ham here, because I have been seeing other smallgoods manufacturers. Don't tell. There is a local supermarket that sells local, highly packaged free range ham and bacon cheaper than the butcher. There, I've said it. Anyway, last time I shopped for bacon at Rob's, he cut it off the bone for me, but since then, health regulations stipulate that as a manufacturer (Rob makes all his own smallgoods) he has to keep his products at a certain temperature throughout the entire process, and then cryovac them as soon as they are done, within a couple of hours. So all of his processed meat has to be encased in little plastic tombs so that we won't get listeria poisoning. OK, so I don't want listeria poisoning, but Rob's premises are amazing, and I'm pretty sure he's not going to set out to kill his customers. It's that old dilemma between safety of the public, where blanket regulations have to cover all eventualities, and individual choice...

Anyway, it turns out I can have my bacon and ham plastic free if I order ahead, and buy them within the set number of hours after they are sliced. So I will turn up on Friday morning, bright and early...

And I think, why, exactly am I doing this, to save a plastic packet, no, two plastic packets? I'm sure Rob thinks I am insane. Then I think of every cryovac packet that has, or will be manufactured, and the thousands of years they will remain in landfill, and how many million more will be added to them before someone works out a sensible alternative (oh, I know, not putting them in packets...).

Turns out delis, who haven't manufactured the meat, can still sell them fresh sliced, from a fridge that doesn't contain raw meat (to prevent cross-contamination), but of course, those delis would have already received the ham in a plastic-wrapped state..

Also discovered that non-cooked but cured food can be sold not encased in plastic, so I bought one of Rob's superb Spanish chorizos instead. Which he handed to me in a hand wrapped in a plastic bag. Next time, maybe, we will have a chat about tongs..

So the conversation is ongoing. It is not an easy or simple thing I am asking, apparently. But what if ten, or forty or one hundred of Rob's customers asked for plastic-free food? Would that change anything? Someone has to be the first, the fool. I am the fool for change.
Labels: buying local food local food plastic free reduce packaging

Heather said…
Not a fool - a pioneer for change. A trailblazer. An inspiration!
Thursday, 13 June, 2013

Everyday Life On A Shoestring said…
This is great stuff. Since we did our Wiltshire Wildlife Trust 'slim your bin' project in the winter the food packaging has got a bit out of hand again here, but you're inspiring me to try a bit harder...
Thursday, 13 June, 2013

Jo said…
Heather, to be honest, I don't want to be any of those things. I like quietly staying invisible and reading Agatha Christie novels and letting other people do things..
Sarah, that is funny, because your slim your bin project was one of the things that started me looking at packaging in the first place. What goes around, comes around!
Thursday, 13 June, 2013

Jo said…
Fran, my children think I'm turning into a mad hippy already, so I guess it doesn't matter if the butcher thinks so too!
Thursday, 13 June, 2013

You are an inspiration and it clearly isn't an easy task. I find it really helpful that you have found out why certain things have to be packaged or not. On the plus side you are talking to people, like your butcher and raising awareness. He doesn't seem to think you are crazy :)

I always find that my kids say the harshest things because they are so direct, and nobody else would be so rude to me (....except maybe my mother!). My eldest daughter says I'm an Ecofreak, and yes I am, and it is because she is a beautiful young woman who deserves a better future than we are facing if we do nothing.

It is hard to step out of the comfort zone of anonymity, but there are so many people hovering on the edge. Just seeing or reading what you are doing will give people the courage to do it too. So feel proud of what you have achieved so far, it will get easier.

Lucindasans said…
I think you are amazing, being willing to stand up and stand out in a society that accepts plastic as necessary.

No plastic, serving homegrown yam and chick pea curry. Mmm, I think I can see why your kids see as a bit of a hippy. Nothing wrong with that of course. Now you just need to sneak in a tie dyed item of clothing into your wardrobe.

BTW, I love Agatha Christie. I love reading her books and then watching a TV representation. My favourite wet weekend activity is watching a Poirot, (or a Bertie and Wooster episode, know this isn't Christie but is gentle humour.) We've also listened to audio books or radio plays of Miss Christie's work when we go on long drives. Passes the time very quickly.
Thursday, 13 June, 2013

Jo said…
Judy and Lucinda, you are so kind and supportive - all of you who read and comment give me such encouragement, and all of the efforts you are embarked on motivate me so much and convince me that, yes, it is important, these tiny, daily acts of limiting our consumption, and thinking very hard about the world we want to live in, and to pass on to the next generation.
You are all my heroes, and lovely and generous, and now we should talk about Miss Marple and the delectable Hercule Poirot. Who has seen the marvellous 1982 movie adaptation of Evil Under the Sun, with Peter Ustinov and Maggie Smith? Marvellous. Maggie Smith hugely funny at her very dry best(this has now turned into the Can't Be Bothered Thursday edition, because I can't be bothered.. red wine optional).
Thursday, 13 June, 2013

Unknown said…
Oh God, plastic bags are one of my top sources of guilt. I have MILLIONS of shopping bags clogging up my kitchen but nearly always forget to take one out with me. It makes me feel terrible. How do you remember yours?! Is it just a question of getting into the habit?
Thursday, 13 June, 2013

Jo said…
Hattie, as soon as I unpack the shopping I put the bags next to the front door, next to my handbag. I have two fold-up-into-nothing reusable bags in my handbag all the time, and now the breadbag is in there too. I may have to get a bigger handbag!
It is just a matter of habit I guess, but I have used reusable bags ever since I left home 22 years ago, so that has been plenty of time to establish a precedent!
I have a friend who supplies me with plastic shopping bags from her internet grocery delivery, to line the kitchen bin. Hoping that one day I won't need them either.
Friday, 14 June, 2013

Anonymous said…
To encourage (not discourage) you I only have a few reusable bags (fabric or paper) and all my bin liners come from sneaky bags (like the ones my work uniform comes in). It's possible - but I did start in this home (alone) 18 months ago aiming for zero waste. Of course so many things still exist here in plastic - deodorant, moisturiser, some oil a housesitter bought. It's just focusing on the wins/gains! (and not the takeaway sushi etc)

didn't know of the bacon rules. My butcher adds it to my ice cream container. Maybe they're cowboys?
Sunday, 16 June, 2013

Jo said…
Sarah, it's good to see that you have sustained your rubbish-free motivation for so long.
Re the bacon - does your butcher cure it himself, or buy it in? It's only if he is the manufacturer that he has to encase it in plastic within hours of its curing. In which case your butcher would be unwrapping the side of bacon before slicing it for you. Ridiculous, considering all the thousands of years bacon has been hanging from the beams of kitchen ceilings all over the world...
Or maybe these are just Tassie regulations? I'll find out. I'm sure the butcher looks forward to our little chats..
Sunday, 16 June, 2013