Oh Where Is the Floor? 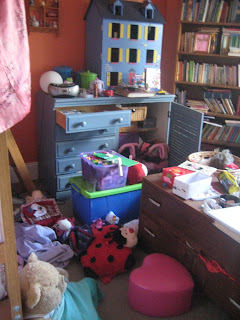 When Marilla came up for the light, various skimpy articles of raiment scattered most untidily over the floor and a certain tempestuous appearance of the bed were the only indications of any presence save her own.
Anne of Green Gables

Let's take a break from saving the world and have a moan about the children's bedrooms instead. This is Posy's bedroom several days after its weekly tidy and vaccuum. 'Tempestuous appearance' has nothing on it. The really terrible thing is that ALL the children's bedrooms look just the same, it's just that the others would disown me if I featured them on the interweb. Here is the other half: 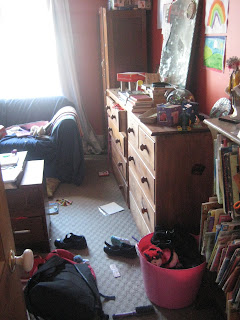 Something must be done. I spent years decluttering the house and learning how to keep it clean, but clearly I forgot to show the children how it is done. It starts now.

Now, Anne, I noticed last night that you threw your clothes all about the floor when you took them off. That is a very untidy habit, and I can't allow it at all. As soon as you take off any article of clothing fold it neatly and place it on the chair.
Anne of Green Gables

So we will be going all Anne of Green Gables this week. Every morning - make the bed, put the jammies away. Every night, put the clothes away, pack the school bag.

But wait, there's more. This afternoon Posy and I pulled all the dress-ups out of the drawers, sent some to the op-shop, packed the others away, and now have two spare drawers. So exciting.

And my job? I am going to attempt everything on my chore list this week. I don't think I've ever done that before, though I have made valiant attempts. Actually, mostly I make less-than valiant attempts. It's starting to show..

My children, one being legally an adult, cannot use the excuse (for a messy room) that I have not shown them how to tidy. They just don't care. Sometimes I am the harridan of the home - or the nag of the neighbourhood.
Sunday, 23 June, 2013

Heather said…
My daughter's room looks much like your daughter's. My room growing up looked much the same. In fact, I was basically kicked out of my house at 18, because I wouldn't keep my room clean. That totally offended me at the time, because while a lot of teenagers were out drinking, doing drugs, and having sex, my dad was throwing me out of the house because I was unable (YES UNABLE!! in my teenage mind) to keep a clean room.

I think that is why I'm kind of lax on my daughter. As long as she cleans the whole thing up once a week and makes her bed every day, I just let it go. Some people just don't have the clean gene. I have since learned how to keep and appreciate a clean house, but my house has its cluttered zones that I cannot (CANNOT!!)keep organized to save my life.

My son is a total neat freak. He has a room full of Legos which are normally every mother's nightmare, but he keeps everything organized and off the floor. Amazing. He takes after his father who was a total neat freak when I met him. We have now evened each other out. He is now slightly more messy and I am much more tidy than when we first met each other.
Monday, 24 June, 2013

Anonymous said…
Eeeek! I think I need to learn this lesson. Hopefully before I am blessed with sprogs to pass my terrible habits onto.
Monday, 24 June, 2013

e / dig in hobart said…
good luck jo! to use the words of heather above , i am a total neat freak. watching the minimalist house go up on grand designs last night makes me want to chuck everything out. i think it's the dark winter days - i just want light and space around me. good luck!
Monday, 24 June, 2013

Jo said…
Lucinda, one of mine legally an adult too. Before he left the state yesterday I laid down the law - no dirty sheets, towels, clothes or foodstuffs to remain in his room while he is away. Vaccuum your room before you leave.. today I only found a very small number of dirty clothes on the floor, and McDonald's wrappers in the bathroom.. we will slowly get there..
Heather, I haven't evicted any children.. yet. I am going to try nagging and a cleaning routine first. Before I vaccuumed this morning my living room was carpeted with Lego. Love to see them being creative, but...
Wish I had given birth to just one neat freak, but with parents like us they just don't have the gene.
Libi, I do wish I had become a good housekeeper before I had children. Would have saved me years of grief (or maybe just sent me completely insane).
e, were you born neat, or did you learn it? I am doing research. Although I am still kind of messy, I could never go back to living in clutter and a huge mess. I think I am reformed!

Bek said…
Ha! Looks like my room from when I was a kid. Drove my mother crazy... but as a self absorbed child I didn't really get what the fuss was about and only cleaned up under pain of death (or further chores, which seemed about the same thing). Its funny to see it from a different perspective, although I appreciate it probably doesn't seem very funny to you. Though I look back now and think of what a little grot I was, and am thankful that my mother instilled some sense of cleanliness in me. Love the anne of green gables quotes!
Monday, 24 June, 2013

Jo said…
Yes, my children think cleaning their room will actually kill them.. I'm glad to hear you appreciate your mother's efforts now. It gives me hope.
I have been re-reading the Anne books recently. It's funny - as mother of teenagers I can now see how infuriating all Anne's mishaps would have been to Marilla. I have two children just as vague and good-natured as Anne who drive me crazy every day, but make me laugh (luckily).

SarahN @ livetolist said…
I was a messy kid sometimes, but at boarding school that's not ok. Interestingly the cleaners remade poorly made beds, bless em! I was ok with bed making but did floor pile stuff. It's the most récent ex that broke me. To think he changed me....
Tuesday, 25 June, 2013

Jo said…
Oh for a cleaner who would make children's beds properly - oh, that's right, that would be me!
I am enjoying seeing your home reno projects that are solving your 'piles of stuff' problems. Very cool.
Thursday, 27 June, 2013