Cup of Tea, Anyone? 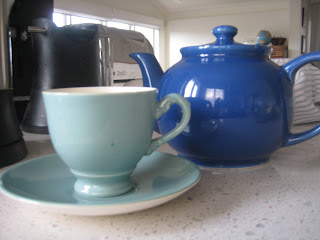 Tea is, clearly, the most important food group. Tea makes everything better, at least a dozen times a day at our house. So it has been with some trepidation that I have watched my giant catering pack of teabags dwindling in number. IS there tea without plastic? What if there isn't? There is clearly a point at which I will be accepting some plastic in my life, some point at which I 'can't' live without the product in question, and I would have to say, tea would be that product..

Here is my daily tea.. 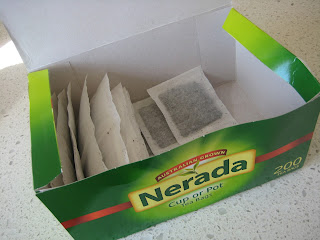 Looks great, doesn't it? Cardboard carton, tea in plain, compostable bags, grown in Australia... but comes covered in plastic. So I went to the supermarket and there were a whole bunch of plain cardboard cartons with tea in them, but when I squeezed them, they rustled suspiciously. I bought a range of the least rustly. Here they are: 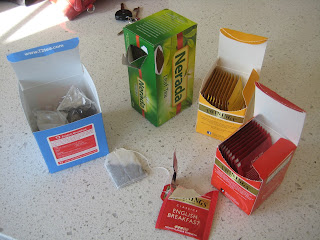 I bought the Twinings bags because you see them all over the place in those cute little paper packets. Not that I felt particularly comfortable about their fair trade credentials, but English Breakfast is a weakness of mine, and I just wanted to see if they were paper packed... but no, foil. Why? Why? The T2 tea (English Breakfast of course) was a Mother's Day present. Loose leaf tea packed in plastic. It looks like you can buy cardboard packages lined with plastic or foil, or plain paper tea bags in cardboard boxes covered in plastic. But the Nerada loose leaf? Cardboard packaging only.  And even cheaper than my 200 bag box of tea bags.

Does anyone out there know of any tea bags that are packed without plastic, grown in Australia, or fairly traded? Does anyone make a cup of tea in a pot anymore? My favourite restaurant serves chai tea as if you were having your own mini tea party. The pot has a central strainer full of whole spices, and is filled with steamed, frothy milk, and there is a tiny jug of honey to tip in the tea cup. I love the idea of tea as a ritual, but like the immediacy and lack of prep (and teapot swishing and washing) that you get with a tea bag. Although, now I come to think of it, the tea bag really is a beverage version of fast food isn't it? What I am craving, again, is the convenience of it. I remember reading a Rumer Godden novel as a teenager (something about sparrows in the title?) in which post-war British children were visiting the US, and were using tea bags and imagining with shocked delight what their Nanny would say about this dreadful extravagance, and how she would be appalled at the idea of tea made in any way but in a pot with everyone sitting around the table in a civilised fashion..
Labels: plastic free reduce packaging reduce rubbish

Anonymous said…
A topic to cheer my soul. (And I'll start blogging again this weekend.) I love tea. We make tea - with tea bags and with loose leaf tea.

And I have a solution to having tea without plastic. Visit a tea shop and buy loose leaf with your own packaging. Then use an infuser to make your cup.

I love English breakfast too. And Assam Joonktollee.

Michele @ The Hills are Alive said…
I was going to say same as comment above. A lot of tea shops sell loose leaf and you can buy as little or as much as you like, bring along your own glass lidded jar, or they will put it in a paper bag and you can put in jar at home. Then use a single serve tea ball or infuser per cup or even in your pot can get ones like tongs that you dip in and out of your water (much like a teabag) or ones more as a ball on a chain that you can dangle into cup or pot. I love a teapot/loose leaf. I am not 100% sure but Bushells Blue Label loose leaf tea is I think in a cardboard box with just paper inside (although the paper may be slightly waxy?? I dont think it is foil though)
Friday, 21 June, 2013

Jo said…
Oh my goodness, a tea shop! Why have I never been to such a place? Where have they been hiding? I want one. Maybe I should open one in town. That would be a noble vocation.
I forgot about infusers! I have the tong type ones that I used to use for herbal teas. Now I mostly use them for sprinkling icing sugar on cakes, which they are brilliant for. I will use them for tea again.
Michele, so glad you commented - hope you come back because I want to say - I would love to comment on your blog, but since you changed the comments to Disqus I can't comment anymore. I have tried signing up twice, and it hasn't worked :(
Friday, 21 June, 2013

Anonymous said…
Have you been to Croplines in Launceston Jo? It's tucked away in the back of an arcade (has a mensware shop on either side of the entrance) on the opposite side of Princess theatre. It sells loose leaf tea in paper bags and has an amazing range. Get yourself a tea infuser and if you really want to do something good for the planet get one of these...
http://www.ilcnsw.asn.au/items/9852
Reusable and you get to put the leaves in the compost :) Have a great weekend and go check out Croplines, they sell coffee as well :)
Saturday, 22 June, 2013

Judy said…
I am surprised by your Twinings teabags. I have several boxes and they are all loose bags in a cardboard box, except the Earl Grey which is foil wrapped in a cardboard box. However I always put them in plastic tubs (re-used from food packaging)to keep them fresh, although I am thinking of transferring them to jam jars instead. It's just that the plastic tubs are stackable, lightweight, child friendly and look quite cute :(
I have one of those 'one cup' teapots. I like to use it for herbal tea, though I still use a teabag. It gives the tea longer to infuse the flavour before it gets cold, so I prefer it to a mug. I also use it for loose Jasmine tea, and have tried making my own nettle tea in it (It was revolting!)The tea bags are bleached and full of chemicals, so aren't good for us anyway.

You are doing so well with the no plastic and reduced packaging waste. It is so difficult to avoid it. Thanks for sharing your ideas.

Jo said…
Fran, thanks for that hint. I have walked past but never been in, not suspecting tea treasures in a coffee shop! I am very excited!
Judy, maybe the Twinings bags get packed in plastic for their long trip to Australia? Who knows..
I still have all my pantry staples in plastic, but will not be putting hot food in plastic ever again, as heating causes the plastic to leach into the food (Chinese, anyone?). And I will certainly be changing over as the plastic breaks. Hoping I have some time before this happens, because as you say, the convenience, the stackability..
Saturday, 22 June, 2013

Barb. said…
I'm a loose-leaf tea drinker but only when it's hot. Otherwise coffee. Teapot for more than 1 person or the tongy thing if it's just me. I think the plastic is because it keeps things fresher and they can't take on smells and flavour of stuff nearby.

Anonymous said…
Lol. I was going to suggest an infuser but it looks like a host of commenters got there first.

I confess I still use tea bags my loose leaf is for special occasions but I always use a pot - usually because it's cheaper - 2 or 3 cups from one bag. But also because it tastes so much better in a pot plus I can't ever leave it at one cup I always pour myself another. I'm a bit of a tea addict can you tell?

I have to say I don't really find a pot more hassle. I usually just rinse the last lot out when I am boiling the kettle for my next cup. Obviously this is not an option if you only drink tea rarely since it would be manky by the time you rinsed the pot but it's fine if you only leave the dregs in the pot for a few hours each time.
Sunday, 23 June, 2013

Jo said…
I'm loving all this positive feedback from people who make pots of tea! Barb, do you do the thing my granny used to? 1 teaspoon of tea for each person and one for the pot? Why does the pot need one? I never asked!
Libi, 'if you only drink tea rarely' ho ho, this is not going to be a problem for me! I can see pots will be handy for drinking multiple cups of tea.. but then I will need a tea cosy.. at the moment I am using a teatowel, which is not very efficient.
Sunday, 23 June, 2013

e / dig in hobart said…
you know i love tea :-) i am making my tea in a thermos these days - the pot, even with a cosy, just doesn't seem to stay warm enough all the way to the last dribble.
i was horrified to see those fancy T2 bags do not biodegrade (not in my soil anyway). they seem to survive for months.
Monday, 24 June, 2013

Anonymous said…
Judy, I agree. Nettle tea is repulsive BUT it is so very very good for us. i add red clover (an antidepressant), chamomile and/or oat straw (general health like nettle), all of which either by themselves or in any of the above combinations make the nettle far more palatable, the red clover most of all as it still contains some of the nectar (I think) which sweetens it.
I too want to buy tea leaves loose and plastic free. I had planned to try and grow some of our own camelia sinensis (tea plants) but after -5 to -7 the last 3-4 mornings and some severe frosts that settled by 9pm and didn't lift til 9am I don't think that the least hardy of the camelia's will have a snowflakes chance at our place. :(
Monday, 24 June, 2013

Jo said…
Oh dear e, I will have to pay close attention to my compost to see which tea bags decompose..
Wednesday, 26 June, 2013

Jo said…
Jessie, I wonder if you can grow tea as a houseplant? I am pretty happy to drink Australian grown or imported fair trade tea - after all, they are the original light, high value import, like spices. I visited our local 'tea shop' today - actually, a shelf of tea jars at the back of a coffee shop. Lots of really cool teas, but nothing plain and boring. I tried vanilla tea, which smells much nicer than it tastes... I wonder if they would get English Breakfast in for me?
Thursday, 27 June, 2013