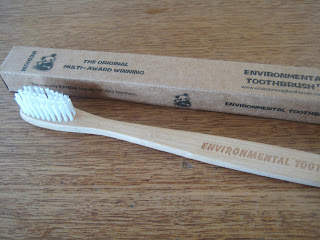 This week I have been trying out the bamboo toothbrush. It has nylon bristles, and after emailing the company owner about this, he sent me some highly technical information about Nylon 4, which has been developed to biodegrade in compost or sewage sludge. I have to say, I am a bit doubtful, but the information I read seems to show that it does indeed, after some weeks or months biodegrade down to carbon and water. Seems counter intuitive, but there you have it. Anyway, must be a whole lot better than a whole plastic toothbrush.

As a toothbrush it works well. I tried the medium this time, might try the soft next time. It does feel slightly like you are brushing your teeth with one of those disposable bamboo chopsticks, but there you are. It comes in child-size, but none of the children seem inclined to try it yet. I found mine at my local wholefoods shop, but there is also a website.

It does feel good to be able to put all the packaging into the recycling bin.

I found all-paper packaged, recycled Australian-made kitty litter that can be composted. When I say 'found' that indicates a degree of personal exertion. Actually, I cast my eyes along the selection at the supermarket, past the considerably cheaper generic version I usually buy. I'll try it and see if it has the kitty tick of approval.

On the tea front - I am enjoying making pots, and have been using infusers. Although twice, yes, on two separate occasions this week I have made tea without in fact putting any tea in the teapot. It makes a very weak brew... I am clearly too vague to be attempting tasks of more than one step early in the morning..

I also ventured into a local coffeshop that Fran had recommended for 'naked' tea. Sure enough, there was a shelf at the back with enormous jars of the most exotic teas you can imagine. One had blue cornflower petals tossed through it and smelled inexplicably of peaches. I chose vanilla tea, which smells a whole lot better than it tastes, but it is an adventure. I think when I go back I will ask if they can order in some boring English or Irish Breakfast for me.

I am still feeling a little overwhelmed and horrified at the ubiquity and nastiness of the global plastic mountain, but I will say that in avoiding it, I am starting to enjoy my shopping expeditions so much more. I had no idea that there was a tiny coffeeshop in town with a steam-punk brass coffee-roasting machine, and a jumbled collection of arcane global foodstuffs and kitchen-ware for sale, let alone giant jars of exotic tea. Shopping has begun to be an adventure.

And speaking of the nastiness of plastic - here is a trap for the unwary. I bought a bunch of metal drinkbottles for the children last year, but only last week discovered that many metal bottles are actually made from aluminium, which is of course, not foodsafe, so requires... a plastic coating, usually...BPA. I checked our bottles, and two were aluminium, and when I took them outside so I could see inside them in the sunlight, they did indeed have plastic linings which were turning yellow, and blotchy as they slowly disintegrated with use. Oh, it was awful. It would have been better to have them use a plastic bottle! So, check your bottles to make sure they are stainless. Aluminium is very light, and gets pits and pockmarks in the surface with use. If you have a corporate logo bottle, it is probably aluminium, because they are much cheaper. I have now bought replacement bottles and double checked their stainless steel credentials..

One more change. You know how stew recipes often require you to toss meat around in a flour and seasoning coating in a plastic bag? Well, goodness, it turns out that is so much easier to do in a mixing bowl. Have we just 'convenienced' ourselves into making life actually harder, not easier?

SarahN @ livetolist said…
What a great collection of progress! I've found trying zero waste has led me to a coop which is a vastly more social shopping experience. And, at their fundraiser this week they had a glass water bottle in one raffle prize but you can hardly win it if you're selling the tickets! I'm not yet on no plastic bottles so I'll be more cautious now - do they start to taste metal like?
Friday, 28 June, 2013

GretchenJoanna said…
I suppose our mothers or grandmothers started tossing their stew meat in a paper bag so they could throw it away and not have to wash a bowl. I don't remember if I ever tried that. In my learning days I certainly didn't have money to spend on single-use paper bags, so I seem to have always used a bowl. But then I seem to have a knack for piling up the most dishes possible when cooking.
Friday, 28 June, 2013

Jo said…
Sarah, I don't know that I could trust myself with a glass bottle, I'm accident prone! The stainless steel certainly doesn't taste like metal. It's one of the most inert metals. Plastic bottles DO make your water taste like plastic though, if you leave them for a day.
Gretchen Joanna, I have that gene too. I have never met anyone who makes more dishes than me - except my mother! So another bowl is hardly going to bother me.
Friday, 28 June, 2013

Bek said…
That's great! I'll definitely have to check out those toothbrushes. You've certainly inspired me to look for products that use less plastics in packaging. I guess with recycling everything I can its easy to get complacent and think that what you do is ok, without really questioning the status quo. Thanks for making me think a bit more. There's so much more I could be doing...
Friday, 28 June, 2013

Heather said…
I'm in need of a new toothbrush. I'll have to check around and see what's available here.

Jo said…
Bek, I know, it's so great that we can recycle so much stuff now - but almost all the plastic we buy is virgin plastic. It's not a perfect closed loop by any means, sadly.
Heather, if you find a good toothbrush, let us know for the benefit of the other US gals here.
Saturday, 29 June, 2013

Anonymous said…
You probably already know about this, but I saw it and thought of you. You'd be a champion!

SarahN @ livetolist said…
I'm pleased to report I am now the owner of a stainless steel bottle - thanks for the inadvertent learning!
Sunday, 30 June, 2013

Jo said…
Hey Lucinda, I hadn't seen it, and checked it out. I really wouldn't be a champion yet... hopefully next July! I am so glad there are programs like that out there, but just between you and me - I am not a joiner. I don't register for things, I don't do groups, I don't do challenges.
I absolutely love the kindness and encouragement and fabulous role models I have found here in my bloggy buddies, as I have my existential crisis, and I'd love to make a little difference in the world... I just don't want to do it as part of a 'challenge'. I want to do it because it is part of my life..
Oh, and Sarah, that's great. I have one too now!
Sunday, 30 June, 2013

Anonymous said…
It might take a bit more effort to find ways to avoid the plastic but it certainly makes you feel good when you can :). We have acres of land here and I just snip up my cardboard and paper into small bits and compost it. I have compost heaps littered about all over the property where I want to plant things in the future. I call it my 2 fold fertilising and softening approach. Living in the city doesn't give you that option but at least you know that your recycling efforts are keeping those containers out of landfill and you can be proud of your achievement :) Vanilla tea isn't very nice. Jasmine tea managest to live up to the smell/taste quotient. I agree with you on the other "normal" teas though, you want a strong cup to get you through the day where sometimes a nice light fragrant brew is more for relaxing and unwinding. To gird your loins takes good old English leaves! :)
Monday, 01 July, 2013

Jo said…
Thanks for the 'tea shop' tip Fran! I totally agree about the necessity of strong tea in the morning. And yesterday - I discovered that David and Lee at Wholesome House also stock bulk tea - in their spice section. I never knew!
Tuesday, 02 July, 2013

e / dig in hobart said…
glad you found the naked tea! i hope the ordinary (non-flavoured) tea tastes good.
how expensive were the toothbrushes? i toss mine about once a month (i'm a harsh scrubber and the bristles warp pretty quickly).
Wednesday, 03 July, 2013

Jo said…
Toothbrush was $3.25, which I thought was reasonable from a small company. I've seen these in two health food shops in town, so you will probably find them in Hobart somewhere.
Thursday, 04 July, 2013