What a joy to be back home in my own dear house on a sparkling autumn day. Posy was up half the night deciding whether to be sick or not, so she spent her first day of the school term at home, sleeping in (nice for some), pottering about with her lego and her drawing, and having me read to her. When I was allowed off duty I went to visit my garden. There was an enormous storm the afternoon that I left for the funeral, and I was told in awed tones about the hail that was so thick that the kids in the street rolled it into hail balls to throw, and made hailmen. Luckily by that time I was in Melbourne, where it was raining, not hailing, otherwise I may have refused to set foot in another plane, and never got to the funeral at all. 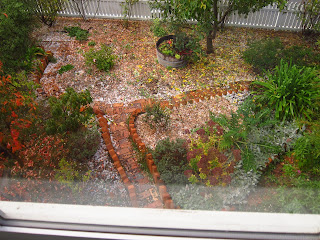 Anyway, upon inspection, all my large leaved plants - the brassicas, the rhubarb - looked like they had been slashed with shards of glass. Some of the lettuce seedlings didn't survive. And, like the Whomping Willow in the Harry Potter movie, the big pear tree and my golden silver birch had lost all their leaves in one fell swoop. So I had a lovely afternoon raking the leaves off the lawn and onto the garden beds, and sniffing in lungfuls of essence of damp-autumn-leaf., which is very restorative after plane travel.

One of the nice moments of being away was meeting the darling new baby of my very dear cousin. He was Grandpa Ken's tenth great-grandchild, and only five weeks old. I know I don't really do craft, but I do occasionally knit, and I had made him a wee hat. Unfortunately, it was one of those patterns that requires a particular yarn, without specifying the ply, and I also don't really do tension squares, so the hat turned out a bit large, but I am hoping his little head will fatten up before the end of winter. 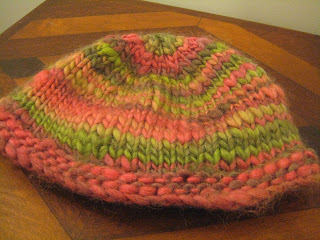 There is also a slightly bigger sister, and a brother, slightly bigger again. We all know how annoying it is when other people get presents and we don't, so I did a little more knitting. The cousins have real chickens in their backyard, but I made some inside chickens, for when it's raining. 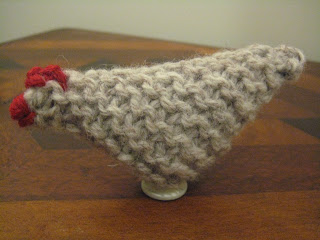 These are seriously the easiest knitting projects ever. A square of plain knitting, folded over in a triangle, stuffed and sewn up. A little embroidery for beak and comb, a button for her to stand on. My children have a number of these in their farm set, because they are easier to knit than sheep and donkeys..

So having celebrated the end of a life, and the beginning of one, I am back in the garden, enjoying the middle (I hope) of a very nice life indeed.
Labels: garden grannies knitting

menopausalrunninggirl said…
Lovely chickens!!! Am going to unashamedly pinch this idea!!
Tuesday, 07 May, 2013

Anonymous said…
So glad you made it back to your lovely nest. Love your optimism re the baby getting a fat(ter) head to fit the beanie - had to stifle my laugh because I should be in bed and not reading blogs - middle of the night and all.

And that chicken is sooo cute. Beyond my skills as the knitting gene did not adhere to my DNA. I can picture your children's farm set full of easy to knit chickens. "Mum, we need cows." "No, this is a chicken farm."
Tuesday, 07 May, 2013

Heather said…
I'm sorry the storm had such an effect on your garden. That must be so frustrating.

It was very thoughtful of you to make something for all the kids. That chicken is adorable. What a cute idea.
Tuesday, 07 May, 2013

whistle in the light said…
Nice chook! I think that's even beyond my knitting prowess. If you've managed to get bored yet now that the hols are past, check your email for a blue-pencil opportunity.
Tuesday, 07 May, 2013

Jo said…
Glad you all liked the chickens. I think there should be more knitting patterns entirely based on squares.. I remember when I was about twelve there was a knitting craze at school, and all the girls were making vests from giant wool on big needles - two rectangles of plain knitting with a bit of rib at the bottom. I could probably do another one of those..

And Karlin my dear - have checked email, sharpening editing pencil..
Tuesday, 07 May, 2013