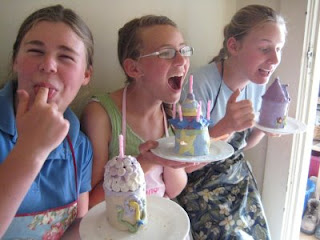 The Domestic Goddess found a cake decorating book at the library, and felt she needed to try to create one. That is the difference between us - I look at cake decorating books and blench, she looks at them and sees a relaxing and creative afternoon. I left it in her hands, although I did hunt online for natural food colouring, which I found here. It is made out of vegetables, and seaweed. The ingredients are actual food. And with just red, yellow and blue, the girls made an extraordinary range of beautiful colours.

So all by herself The Domestic Goddess cooked the cakes (in baked bean cans), organized a trinity of cake decorators, and they went to work in the kitchen for the afternoon, kneading, and cutting and creating, and making a giant mess.

I went to visit the neighbours.

The girls decorated, they even cleaned up, and I am so impressed with the results. Two Rapunzel castles, and one starry extravaganza. These girls have been cooking together since they could see over the kitchen bench. They spent several years making up their own recipes which produced, well, varying results. I still have copies of the recipes they wrote down. Priceless. I am so glad I gritted my teeth so many times and left them to it. They have educated themselves and each other in so many cooking techniques that I only learned as an adult, and some I have never mastered. They cook entire meals at home, and are regularly responsible for their families' baking, as well as these 'special projects'. Together our families have tackled Egyptian, Roman and French feasts. The girls are brave and resourceful, and nothing is scary because they are young, and have never been told that there is anything they cannot do.

Unfortunately they have shown no talent or inclination for cleaning the bathroom...
Labels: food friends