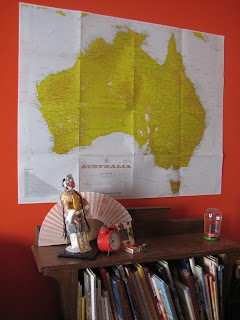 This is Phase Two in our Clean Up the Children's Bedrooms Campaign. Posy now has a clean surface on top of her bookcase. And it is going to STAY clean. That is only one surface. Can she do it? Wherever she puts stuff, it has to be somewhere other than this surface. 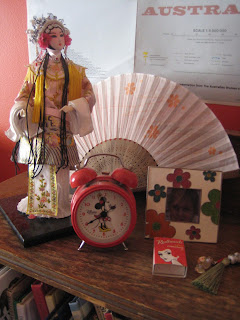 In the matchbox lies Dead Margaret. Every summer since she was four, Posy has collected a series of dead bumblebees and named them all Dead Margaret. Dead Margaret used to accompany us everywhere, but nowadays she generally stays on the bookcase.

Every couple of weeks we will add a new surface to keep clear. The other girls have surfaces to keep clear too. One has a mantelpiece, the other has her piano. Clean, clean, clean.

Our previous efforts at cleaning the rooms, which involved making beds, putting PJs and clothes away, are going... OK. The jobs are mostly getting done before school, and any time where improvements are happening more often than not is a success in my books.

We have spent the first few days of the wintery and arctic school holidays with builders in the house, removing old windows, and (eventually) replacing them with new. Icy winds blew through the house constantly, but the upside was that the girls had to clean a lot out of their rooms so the builders could reach the windows.

The recycling bin is full of old school projects, the wardrobes are more or less cleared out, and I gave Posy a choice... she could help me clean out all her 'treasure' baskets, or I could clean them out by myself while she watched a movie. Which one do you think she picked? I had a peaceful hour and a half throwing away a lot of, um, treasures. It is much easier to find things in her room now. If only I could persuade the other girls...

And now, the house is full of plaster dust and dirt from partial wall destruction... so the next few days... cleaning, cleaning, cleaning. Because what are school holidays for after all?
Labels: decluttering housekeeping parenting

Heather said…
I love the story about "Dead Margaret." It sounds as if it is right out of a children's novel.

In my family they cry out for things to be placed on. I long for a surface to be left clear for more than one afternoon. And I love a good clean out. I have to hide old school work and stuff from my husband. The kids know to bury stuff in the big bin, lest Dad rescues it.

Anonymous said…
Good luck with the room cleaning. My daughters are 23 and 25 and STILL don't clean their rooms. The only positive is that they no longer live with us so it's not my problem any more ;)
Wednesday, 10 July, 2013

Anonymous said…
Oops, sorry for the double post there, there was a brown out and it posted twice! ;)
Wednesday, 10 July, 2013

Jo said…
Heather, Posy absolutely believes she is the central character in a Greek tragedy already, judging from the daily drama..
Lucinda, I must confess I WAS thinking of that Ab Fab episode. I LOVE a clear surface. I'm not sure what I was thinking when I went and had four children..
Fran, it's OK, fixed it with blog magic! I didn't clean my room at 25 either, so I don't know whether it is even possible to make a difference to the children's 'neat' factor. Maybe they are genetically doomed.
Wednesday, 10 July, 2013

SarahN @ livetolist said…
I love that you got the chance to clear out the treasures so easily - nicely played indeed.
Wednesday, 10 July, 2013

Anonymous said…
Jo, I believe I kept a rather neat room, and despair at my children's mess. My mother, surprisingly, has a different memory from me on the state of my room. I don't know from where her obviously false memories have stemmed.

Now, Ab Fab. I think I have a little Patsy (I have blonde hair and love champers, darling), a bit of Saffy (I am a conservative, law-abiding, study swat) and a bit of the grandmother (I forget names, and other things). My favourite character is the secretary.
Wednesday, 10 July, 2013

Jo said…
I am very much afraid I am going to turn into the granny, and sooner rather than later. Already my children despair at my creeping dementia!
Wednesday, 10 July, 2013

GretchenJoanna said…
Progress, progress -- it's all a woman can hope for in the realm of housework. Sweet that even Dead Margaret has a lovelier spot for her display now. And I can see that small bestowing of honor as part of the progress of educating the younger generation, too. You accomplish a great deal every day!
Thursday, 11 July, 2013

Jo said…
Thankyou Gretchen Joanna, and yes, though I hadn't thought of it that way, you are right, honouring a dead bumblebee is a worthy reason to clear a space and make it beautiful.
Thursday, 11 July, 2013

e / dig in hobart said…
jo, i cannot imagine having work done on the house at this time of the year and letting this icy air inside! brave Launceston folk!! :-)
when i was a little girl i had a bookshelf similar to Posy's and i had so many ornaments and knick knacks (more than her tasteful display), it was ridiculous. i hated the whole dusting and washing rigmarole. proably why i am so minimalist now!
it's a good time of year to declutter, when the weather forces us indoors.
Thursday, 11 July, 2013

Jo said…
e, you don't imagine I asked to have windows taken out in the middle of winter? No, it took 4 months since I ordered them! Typical.
And Posy has many, many more ornaments on her various surfaces, and she is extremely attached to every single one! We will be visiting them all over the next couple of months..
Thursday, 11 July, 2013