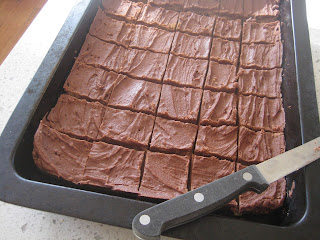 I really do hate wasting food, as the numerous leftovers in little glass tombs in my fridge can attest to (I mostly eat them up for lunch the next day.. but there are some that WILL hide at the back behind the condiments.  I think they move around in the night).

However, here is an easy peasy recipe from left-overs that all the children LOVE, and is the closest thing to a successful muesli bar substitute we have found (any alternative muesli bar recipes gratefully received).

The basis of this recipe is all those ground up bits in the bottom of cereal packets, and broken Weet-bix that no-one will eat. I save them all in an airtight tub until we have enough for Left-Overs Slice (marketing needs to get onto that name..). I always make a double recipe because I have hordes to feed, and they are all piggies. 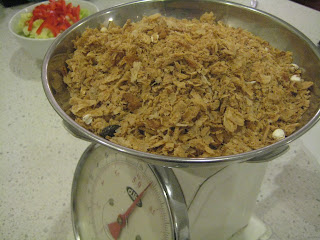 First spend a couple of weeks collecting your left-over cereal. As you can see, we have quite a selection of different cereals there. I originally found this recipe on the side of the Weet-bix box. They suggest that you break up four perfectly good weet-bix for this recipe. On no account follow this flagrantly wastrel advice. Ha, no, we are the Frugal Warriors. We Waste Not! We Want Not!

In a large mixing bowl combine:

Add 150g melted butter and stir well.
Press mixture into a lamington tin.
Bake for 15-20 mins at 180C (you want the slice to be soft in the middle when it comes out of the oven. It will harden as it cools. When the edges start to pull away from the pan, it is done)

This is the thrifty variation, where you ice it with chocolate icing when it is cool (1 cup icing sugar, 1Tbsp cocoa, sifted, add milk by the tablespoon until you get your preferred consistency).

The original recipe called for a cup of choc chips instead of the cocoa in the slice mix, and it was drizzled with melted dark chocolate instead of iced.

My children feel that it is better to ice the slice, and eat the chocolate separately. Who am I to circumvent the democratic process?

Sharon said…
What a great recipe Im definately going to try that one
Wednesday, 31 July, 2013

Heather said…
Looks great. I sometimes try to get my kids to sprinkle the leftover cereal bits into their yogurt for some crunch, but I think they would like your chocolatized version better.
Wednesday, 31 July, 2013

Jo said…
Hi Milow, thanks for your nice comment. I had a peek at your blog, and I love your very cute chickens, cats and op shop goodies!
Lynda, hope you and yours like it!
e, I have to say, as the leftovers in my fridge at the moment are rice and lasagne, I might not try it on ALL the leftovers...
Heather, who could not prefer cereal with chocolate, makes everything better!
Thursday, 01 August, 2013

Anonymous said…
Love the thrift and my suggestion for a new name is "floor scrapings slice"...should take off as a "must bake" part of high tea methinks ;). The recipe looks delicious and very much like my mums old "chocolate slice" recipe. Haven't made a slice in years... might just have to remedy that this weekend. Cheers for sharing the recipe :)
Friday, 02 August, 2013

Jo said…
Fran, I knew you would come up with a great name. You should absolutely go into marketing :)
Friday, 02 August, 2013

Anonymous said…
Makes me wish we ate cereal!
My frugal healthy muesli bar substitute is chuck some sultanas and dates (dried iranian ones are fine, it needn't be medjools) or even dried apricots if you like into a food processor and process til a thick paste. Add oats, nuts and seeds that you like and process it until it's evenly mixed and pretty much hard. Cram it into a lined slice tray, flatten as much as you can. Then get a second same sized tray and put it on top of the slice. Put the 2 stacked ones together on the floor then stand on that sucker to flatten it's rock hardness further. Chill, cut it up and eat. It's delicious. :) There are no quantities as it's sort of a suck it an see recipe but never fails. I added water once in the first step and the whole recipe was goop so i just added flour to make it a thickish cake like consistency and baked it til golden. Still delicious. :) I added chia seeds for energy and ate it as a meal during and just after birthing my youngest and it rocked! Breakfast on the run? Perfect. Lunch in a hurry. Winner. Dessert after a meal. Brilliance. Frugal, not too shabby but nothing like your recipe.
And yep, trust Fran to come up with a brilliant name. :D
Sunday, 04 August, 2013

Jo said…
Jessie, thanks for that recipe. I like recipes that you can experiment and add things to... and a cooking technique that involves standing on your food, well, that is just so left field, I have to try it!
Monday, 05 August, 2013

mycuriousteaparty said…
Just found your blog, (found your comment on Frugal Queen) and your wonderful recipe 'Left over slice' off to make it now for my baby's lunch box.. Not quite a baby anymore at 6'2" but still hungry, might have to make them just a little bigger ~ Julie.
Wednesday, 04 September, 2013

Jo said…
Julie, hope it turned out well. I have a baby of around that height as well, and he devours it with gusto!
Thursday, 05 September, 2013