I Run Out of Gumption 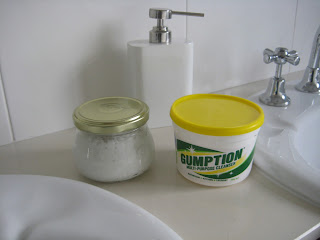 Fear not, fair readers, we are not sinking into a state of moral turpitude here at Chez Blueday, we have merely run out of our favourite bathroom cleaner.

Back when Posy was a newborn, and I was attempting to homeschool the three older children, I had a lovely, lovely cleaner who came once a week for two years. It was blissful. Adele was a kind, wise granny who gave really good advice, and taught me how to clean house properly. She also told great stories about her childhood. Her dad worked on the hydro-electric scheme in the Tasmanian Highlands. Adele walked to school in the snow, and looked after her brother while her Mum did everything Ma did in Little House on the Prairie. They lived out of the vegie garden, and on what her Dad shot - rabbits, wallaby, feral deer. She got married at sixteen, raised her kids on the smell of an oily rag, and supported her sick husband for the last dozen years of his life.

If anyone was ever an advertisement for gumption, it would be Adele, and the first week she came, she instructed me to go out and buy a tub, because it was cheap, worked well, and didn't have nasty ingredients. I don't know about the ingredients, because they're not listed, but I have used it ever since, because who could go back to using anything else after having cleaned with Gumption?

Until this week, when I ran out, and decided it would be a propitious moment to experiment with homemade cleaners. I had borrowed a book from the library which featured this bathroom cleaning paste, and I had all the ingredients on hand, which is the usual criteria for me to try a new recipe. I used eucalyptus oil instead of peppermint, and added more water. I used 60mls, which makes me think that the listed 5ml might be a typo. 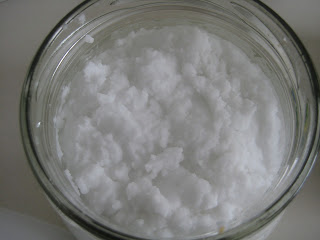 Here is the finished product. It is not as 'pasty' as Gumption, and tends to drop onto the floor a bit, as bicarb mixtures do, but that's OK, because Adele taught me to always wash the walls before the floors. It cleans the grout as well as Gumption did, that is, it is not a miracle cleaner, but it does the job. It needs to be rinsed well because it is a bit gritty, but rinsing is something I am all about anyway. I used it all over the bathroom, and hardly needed my expensive bottle of eco-bathroom-spray.

It rubbed the rust ring off the kitchen bench that had been left by Rosy's can of hairspray, and it WAS magic on the taps. They have never been so shiny. And the bathroom smelled so clean. And although Gumption is cheap, this is much cheaper. So I think we have a zero waste replacement for Gumption. It just needs a brilliant name...

Update: I have now been using this for a year, and it really is fantastic, even though it still doesn't have a brilliant name. I have fiddled the recipe a bit, so here is the slightly updated version:

In a bowl, mix the baking soda with the cream of tartar. In a jug mix the soap and water. Pour the liquid into the powders. Mix with a fork and add clove oil.

I find this amount fits perfectly into a salsa dip jar. Leave the lid off for a few hours because this mixture reacts and bubbles up like a sinister chemistry experiment. It will settle down within a day and become merely a boring but effective cleaning agent. The clove oil keeps mould away, as some of my commenters noted. It's true, it really does! I still have old mould stains in my grout, but I have had no new mould at all since I started using this paste, except those couple of times where I didn't clean the shower for three weeks at a time (sssh! Don't tell...)
Labels: home made housekeeping plastic free thrifty

Anonymous said…
I have no name for Jo's Miracle Cleaner, but well done you.

I made a homemade cleaner using Oil of Clove which is meant to inhibit mould, vinegar, water, detergent and washing soda. It was OK but not as good as gumption.

Adele sounds brilliant. What an amazing life! I love stories of resourceful people.

And more close psychic connections. I love Gumption. It cleans so well and it doesn't smell or burn skin or bleach out clothes. And I re-read the Little House Series regularly and there are not many books i re-read. Some of my books in the series have died and I regularly think about buying the series in hardback. I love the first book and the Long Winter.
Thursday, 11 July, 2013

Everyday Life On A Shoestring said…
Great! How about a DIY version of your expensive eco cleaner next? I swear by half vinegar/half water and a squirt of lemon juice. Love the Little House books too - just reading LHotP with the kids at the moment - the falling apart copies from my childhood. My MiL has bought box sets of the entire TV series so we're slowly borrowing them from her.
Friday, 12 July, 2013

Jo said…
Mm, Lucinda, was going to put Oil of Cloves in, might do that next time. Gosh we are special, unique and delicate snowflakes aren't we? Gumption AND LHTP :)

Sarah, spray cleaner next on the list. Thanks for your recipe - one thing I have a lot of is lemons! Do you ever think, when you read the little house books as an adult, what foolish decisions Pa made?
Friday, 12 July, 2013

SarahN @ livetolist said…
My mother and her bestie converted to gumption in my childhood. My mother is now blessed with a cleaner whose preferences lay firmly elsewhere. I've yet to need a gumption like substance in 18 months - I'm either a grot (most likely) or microfiche + vinegar is enough for my one person messes! Nice work though, I've flirted with a similar recipe.

Speaking of ingredients on hand - I just made lemon cheesecake ones to "use up" cream cheese and lemon. Oh the trials! The liquid was delicious!
Friday, 12 July, 2013

SarahN @ livetolist said…
This comment has been removed by the author.
Friday, 12 July, 2013

Anonymous said…
Clove oil is FANTASTIC in the bathroom as it's a mould inhibitor, unlike bleach which feeds the bloody stuff. :) Clove oil is a no go during pregnancy but otherwise it's a wonderful oil to add and to me it always makes me think of Christmas. :)
We have zero cleaners that are purchased here now (I think) aside from in the kitchen and that's only because I've been a slack chicken at ordering some more castile soap. Bicarb or vinegar do just about everything and evey homemade laundry powder using the only natural soap I could find in town - a pricey chemist version - is as cheap as chips and works a treat. Homemade cleaners or truly true eco ones are seriously so much better than diluted chemical crap supermarket ones hey. :)
Friday, 12 July, 2013

Jo said…
Sarah and Jessie, great work on the natural cleaners. I have been hesitant to use vinegar, because I really don't like the smell of it. Does it linger in the house after cleaning? I will use clove oil next in the bathroom Jessie.
Saturday, 13 July, 2013

e / dig in hobart said…
i too adore gumption. it is the only thing that keeps my stainless steel kitchen sink sparkling. and i love the fresh smell, which reminds me of the solvol soap my dad used to wash his hands with when they needed heavy duty cleaning.
what a wonder woman you are. i would never think to replicate gumption!
Sunday, 14 July, 2013

Jo said…
I love a shiny sink! And my dad used solvol too, one of those scents from childhood. I sometimes think my current project is a bit mad, but maybe knowing how to make cleaning products from bicarb soda and cream of tartar will come in handy one day..
Sunday, 14 July, 2013

SarahN @ livetolist said…
The vinegar smell goes when it dries but I usually add eucalyptus oil to the spray bottle to mask it a little bit. You could try lemon oil too I reckon
Monday, 15 July, 2013

Hattie said…
Since becoming pregnant and/or a little bit crazy, I've been really despising the chemicals I clean the house with. Maybe this is just what I need. I'll give it a shot, in any case. Can't make me any crazier!
Tuesday, 16 July, 2013

Jo said…
Sarah, thanks for the hint, Hattie, that's what I figure, can't make me any crazier (family may disagree..)
Thursday, 18 July, 2013

Everyday Life On A Shoestring said…
Yes, Pa is downright foolhardy sometimes. We've just been reading a chapter where they are surrounded by wolves in the newly built house on the prairies with only a quilt covering the doorway. Couldn't help thinking that knocking up a door should have been higher up his priority list than gallivanting round the surrounding area checking for other settlers...And yes the vinegar smell does disappear very quickly and actually acts as an odour eater anyway. xx

Bosshogg said…
I'm pretty sure Gumption has bleach in it.
Friday, 18 October, 2013

Jo said…
Bosshogg, you could well be right, in which case I'm well out of it with my home made version.
Monday, 21 October, 2013

If you don't have the time or the inclination to make your own Gumption like paste, there is a beautiful, natural version available through Our Eco Clean. It's a natural bi-carb paste with essential oil. It works amazingly & it will make your house smell like a day spa, especially if you use their other products as well. They have a complete range to clean your house & lets you do away with all the normal chemical laden cleaners we all have in our homes.

No worries about kids crawling around your floors, or pets licking up a dropped scrap etc!!

It's all available online, or through a growing number of stores around the country like Flannery's, Wray Organics, IGA & other independent natural/organic stores.