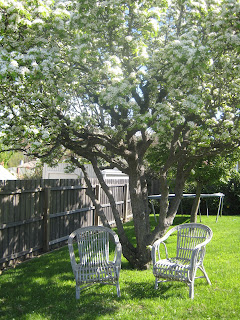 The picture above is an illustration of how hard my life is. I get to sit in those chairs sometimes, with a cup of tea and a book, and often a cat. The pear tree has been in bloom a full two weeks, but now all the blossom has blown off into the pool, making it look like a wedding setting in Country Style magazine, and two little girls hide up there among the new green leaves whenever I want them to be doing something else.

See the problems I have to deal with? Recalcitrant children and pear blossom. So it will come as no surprise that I am suffering from a mild existential malaise. This is a term I have coined for those, such as myself, who live a really spectacularly pleasant life compared to nearly everyone else in the known universe, but who still want to do a little whining, you know, about having to clean the bathroom, pack lunches, turn up at parent help. I have tried to solve the problem by lying on the couch with a stack of murder mysteries all day, and informing the family that dinner is toasted sandwiches and cereal, and yes, there is a certain measure of satisfaction in that course of action, but only up until the point where they've all gone to bed and I get up to find just how much mess four children can make with a toasted sandwich maker and every dish in the kitchen.

In the end, after many years of painstaking research, I have concluded that the only real solution (and it really hurts me to write this), is to clean the bathroom, pack the lunches, turn up at parent help, and then spend two hours weeding the garden. Oh, and then sit under the pear tree with a cup of tea.

GretchenJoanna said…
Happy Spring! Everyone up here is talking about how wonderful Autumn is, and I keep wondering why we feel that? It must be the way God made us, to need these seasons. Summer can be too busy and excited, so that we appreciate the slow pace and shorter days that make our hibernating seem logical as well as intuitive.

But why am I chattering to you about this? You are at the other end of the year...and wise to sit under the tree for at least a few minutes and not get all summery excited any sooner than necessary.
Wednesday, 17 October, 2012

Jo said…
Gretchen Joanna, I grew up in the tropics, and spring blossom and autumn leaves were like fairy tales. I LOVE the seasons - it's like living in a story book. Enjoy those pumpkins and bowls of soup and a good book in your cold weather!
Friday, 19 October, 2012