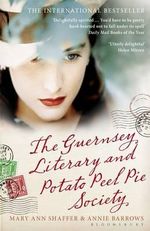 The Girl often finds tasty literary treats for me, turning over her library stack, and saying, 'I think you'd like this, Mum.' So last year she brought home The Guernsy Literary & Potato Peel Society for me, and I loved it, so much so that I actually bought a copy, and one for my sister-in-law, and one for Posy's teacher for Christmas...

It reminds me of Helene Hanff's charming 84 Charing Cross Road, in that both are written as a series of letters, they both concern the years directly after the second world war, and Juliet Ashton, of TGL&PPS bears a strong resemblance to Helene Hanff, a lover of literature, a writer but not an academic, direct, kind and endlessly curious about everyone she encounters.

I had known peripherally that the Channel Islands had been occupied by the Germans during the war, but never had the reality of it brought to my attention. At the beginning of the war, the Germans took nearly everything the Islanders grew to feed their armies, and by the end of the war, the British established a blockade, which meant that neither the Germans nor the Islanders had anything to eat, or wear, or use, other than what they could produce on their tiny islands. I must admit to being completely obsessed as a child by survivalist fantasies. I loved Children of the New Forest, The Swiss Family Robinson and Little House on the Prairie books, but this novel puts it all in perspective. What would I have left to cook with after meat, flour and sugar were off the menu, there was no oil or salt for cooking, and all the trees had been cut down for firewood? After five years nobody had a decent pair of shoes and all their clothes were in rags, there was no soap. Most of the children had been sent away to England a week before the Germans arrived, those who were left were skin and bones. They lived on potatoes, turnips and greens boiled in sea water in lieu of salt and went to bed when it got dark.

It sounds horribly grim, but this novel is funny and charming, without belittling the terrible times the Islanders had to endure. It concerns Juliet, a London writer, who travels to Guernsey after the war to write about life under the Occupation, as revealed to her by the eccentric members of the Literacy Society, and her subsequent adventures. It also features a fierce and determined four year old, who likes ferrets, and has invented a game called Dead Bride, and the local witch who develops a passion for phrenology and has a parrot called Zenobia. What's not to like?

Left-Handed Housewife said…
I enjoyed this book very much. If I had any complaints it's only that everyone was just a touch too good, except for the one character who was a rotter. Everyone I know is at least half bad and most are 2/3rds bad. But otherwise, I thought it a charming and enjoyable novel and I might go read it again.