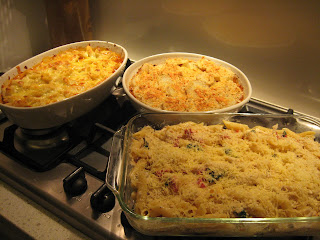 The bulk cooking project continues. Afternoons after school the girls get out the recipe books for an hour's recreational cooking, look at the oven, sigh, then put the books away again. I am SO mean. They have decided that we will be cooking Thursday and Saturday afternoons, because they are free then, and on other days they pore over recipe books, making plans. I do feel rather lucky to have a teenager who orders Traditional Cakes and Puddings from the library, and asks me which one I would like for Mother's Day. It is also a wonder that we are not all enormously fat.

As you can see from above, cheese is a staple ingredient in my cooking. I am a very, very plain cook. I rotate fifteen or so dishes that everyone mostly likes, and sometimes one of the children, or occasionally me, tries something new, and if we like it, we add it to the repertoire. I like big one-pot stews and casseroles, very 1970's, and serve them with lashings of veg, or salad. It is not Masterchef, but it is achievable, and served with love. I think I will be writing the cookbook 50 Ways With Minced Beef. Last week's effort with the mince was lasagne turned cottage pie, this week's was a potato slice-topped hotpot, which, with the addition of frozen corn to the sauce turned into a casserole topped with macaroni cheese, which serendipitously used up left-over cooked pasta. The basis of all of these is the bolognese sauce, blessings on whoever invented it. At our place it changes week by week, depending on what we have on hand. It always has onion and garlic, it mostly has a couple of carrots and celery sticks whizzed up in the food processor. I saute all of these ingredients as long and slowly as possible. Last week it had the addition of a shredded zucchini gifted by a friend (the actual conversation went, 'Please, PLEASE take a zucchini..'), this week I whizzed up what are surely the last few tomatoes from the garden with some of our frozen basil, next week I have a bunch of peeled frozen broccoli stems to puree and add. I also add a handful of red lentils which boil down to invisible in the tomato sauce. So a giant pan of this sauce bubbling away every week makes meals that wouldn't win any cooking contests, but contain vegies, are wonderfully comforting on a cold night, and all the children like them, which makes them magic and golden in my book.

Th other dish is cooked pasta, shredded cooked chicken, salami, sundried tomato, and wilted warrigal greens from the garden, all mixed together with cheese and cream. Because dairy products are important, right? My favourite, probably over-used, seccret ingredient in the topping of all casseroles, underneath the cheese, is flavoured breadcrumbs. Whenever there are breadcrusts that no-one has eaten I store them in the freezer till needed, then blitz them in the food processor with oil, salt, a random spice mixture from the pantry, and something green from the garden (rosemary, parsley, basil, oregano). I store that back in the freezer and use it on top of everything that isn't dessert. It's brilliant for crumbing fish or chicken or potato and vegie patties, and just makes everything crunchy and delicious, especially if you add cheese. Mmmmm, cheese..

Ok, and now a failure, well not a failure so much as a glitch. Last week's cottage pie was.....delicious. BUT, although it sat on the benchtop all day, and then went into the microwave for fifteen minutes or so, and then had its top toasted under the grill, it was still frozen in the middle. In the end we had to scoop servings from around the edge and microwave them again until they were piping hot. So, lesson learned. Freeze dinners in shallow dishes. And always add cheese.
Labels: bulk cooking food local food projects saving electricity thrifty

Monique said…
I always thought that my great contribution to the culinary literature should be "101 ways to eat oats for breakfast"...We have experimented even further whilst on our travels, and lacking an oven. Gabi created an awesome fried oat breakfast offering.. on the stove toasted with butter, cinnamon, plums, grapes, and softened with orange juice, and served warm with natural yogurt.. yum!! Since I'm struggling to write my own blog, I thought I would just comment on yours!! :)
Thursday, 17 May, 2012

Jo said…
I always love to hear from you. I love the sound of the fried porridge. Apparently it was a Scottish tradition to pour porridge into a dresser drawer and eat it over the course of a few days, cut into slices as needed. It soured slightly as the days passed, which is supposedly very good for the digestion. So, leftovers, straight into a drawer!
Saturday, 19 May, 2012