Weed of the Week: Fat Hen 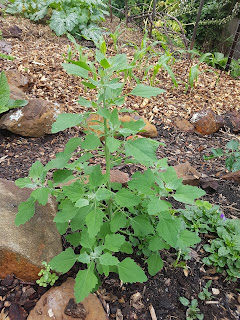 Please note that the title Weed of the Week should not lead any dear reader to expect an actual weed of the week - a glance at my posting history should scotch that expectation right at the outset. Really, I am just a fan of alliteration.

This is my favourite weed of the season. Summer means fat hen, means delicious munching in the garden, a yummy addition to salads and a delicious spinach substitute. Fat hen, or chenopodium album is also known as pigweed, lambs quarters and goose foot. It is part of the spinach family and tastes very much like.. spinach! It is mild, a bit nutty, very spinach-ey. When you allow it to grow in the vegie garden alongside the tomatoes so it gets a bit of extra water it grows huge and lush and gives you lots of spinach greens throughout hot weather when English spinach just bolts to seed. You can eat the flowers and seeds of fat hen as well, but the leaves are the best. It is probably best cooked as the leaves have a lot of oxalic acid in them, as spinach does, but it is so yum that I cannot resist scoffing it in the garden.

It contains a lot of vitamin C, calcium and protein. Lots of protein, up to 43%! The Weed Forager's Handbook also tells me that this plant is the origin of the name Melbourne - its Anglo-Saxon name was melde - Melde-bourne... melde growing by a stream. 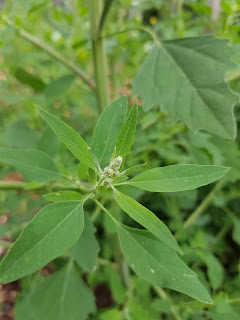 So use it to make your hens fat, feed it to the pigs, admire its leaves shaped like goose feet, and throw it in the salad and the curry. Or eat it meditatively in the garden while watching the tomatoes redden at midsummer and indulge in a bit of weed love. Happy days.

Anonymous said…
Love alliteration too. I have lots of weeds so may have some fat hen but knowing my luck I would eat something different, bitter if not poisonous.

Hope you had a lovely January. My cousin is moving to Tassie, so I may visit again!
Lucinda
Friday, 24 January, 2020

Jo said…
Lucinda, goody, would love to show you my nice little cottage! Weed ID is initially overwhelming and scary, but very soon you start to notice the differences between leaves and stems and flowers and you would no more misidentify a weed than your favourite sweet peas! For me, fungi ID is scary, but that will be my challenge this autumn - identify one edible mushroom. I am hoping to find a knowledgeable person who isn't dead yet to take me mushrooming..
Friday, 24 January, 2020

Anonymous said…
Oh yes, wild fungi eating is a too scary thing to contemplate. You know , if there is a mushroom expert in an English village novel, they will be the one who is the murderer. Lucinda
Saturday, 25 January, 2020

Jo said…
Kathy, maybe you even have it in your garden??

GretchenJoanna said…
I have had that weed sometimes, and didn't know "who" it was. Glad to find out that it's useful. Thank you!
Sunday, 26 January, 2020

Jo said…
Gretchen Joanna, I love to introduce folks to their weeds, and I love it when other folk perform that service for me:)
Monday, 27 January, 2020