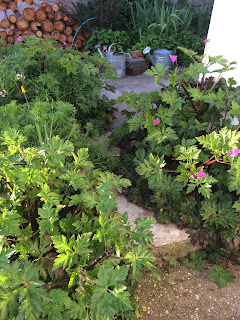 There is tomato sauce on my dining room ceiling due to the incident with the exploding sauce bottle. There is brown poster paint on the floor due to the Grade 7 history project. 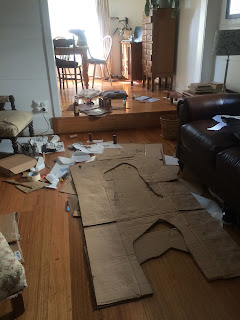 The weeds that were ankle high last week are knee high this week and will be waist high next week. There is mould in the refrigerator vegie drawer. I accidentally left the sauerkraut in the sun, and it too developed an exciting mould. The builder stepped on a tray of germinating seeds, and every time he turns up he discovers another problem with the roof or drains which will involve tearing up half the garden and maybe selling one of the children to pay for it. In other words, it is situation completely normal.

I am sitting by the open window with a gentle breeze blowing in, watching the evening sunlight glow golden on the garden, ignoring the paint, the sauce, the mould, the weeds, the dirt, the things I haven't done, the things I have done and maybe shouldn't have, and enjoying the bees and the flowers, and the golden light on the spiders' webs that festoon the dining room windows.

This week I am reading the Meditations of Marcus Aurelius. Marcus Aurelius was Roman Emperor from AD161 until his death in AD180. For many of those years he fought on the borders of the Empire, commanding his legions and living in camp with them. He was the most important man in the Empire, and yet he believed that fame and power were worthless. Marcus Aurelius was a Stoic. His writings were really notes to self, reminding himself to live a good life and accept what comes. The Stoics taught themselves to live cheerfully whatever their circumstances, to live the simplest life they could, and they believed that much unhappiness stems from restlessly desiring what is out of reach. Their motto might have been: be thankful for what you have, and find the good in it.

Marcus Aurelius began his Meditations with a list of the people who had taught him how to live a good life. Is this maybe the first example of an author acknowledgement page in literature? I am going to use this post to acknowledge my mum, who will soon be celebrating her 70th birthday. It was she who taught me how to appreciate tiny beautiful things. Throughout my childhood she would point out patterns on bugs, flowers made up of other, tiny flowers, dew drops on spiders' webs. She also modelled the importance of appreciating trees, sunsets and good books before worrying about doing the cleaning. Thanks, Mum :)

I like the Stoic philosophy. I would like to be more focussed on inward calm than outward stressors. I don't actually have a life full of big worrying problems, for which I am very thankful. I will practice being thankful for what I have, and being calm about the daily annoyances. Bees and the sunset are easy to be thankful for, and there is possibly even some good in the drainage situation, although I have to admit, I am still looking for it..

Linda said…
Happy birthday to your Mum. Tell her joining the 70 Club is OK - I joined 6 months ago! Good luck with being stoical, especially when there's a lot of ball juggling going on.
Thursday, 30 November, 2017

simplelife said…
Your mum sounds like a wise woman. Long may the lessons you gleaned from her serve you well, and I'm sure they will.
What is with men and not watching where they put their feet?
Your description of the light and all that you could see was so relaxing and medatitive. Well done. I know it would serve me well to look at the world and my life in such a way, sadly my childhood lessons were the opposite of yours so I must work very hard to move past those ingrained habits. For me it was, you get up and get your work done and the day is your own, Great except with 4 kids a very untidy husband and a too big house the work is never done.

Treaders said…
Wow, stoic it is. And what an advanced thinker he was. I'm happy to say I am incredibly grateful for what I have am more than aware of it. It must be sad to always be chasing/wanting/envying more mustn't it? Anna
Thursday, 30 November, 2017

GretchenJoanna said…
If you *did* sell one of the children, now that would indicate a "big worrying problem"!

But so far, I think your perspective is most sane.
Thursday, 30 November, 2017

fran7narf said…
Stoic's eh? I think this might be my new moniker from now on. Living simply and finding the good in everything also sounds like a brilliant way to live. Happy birthday to your mum and I am so glad that she taught you how to look at, and love the small things :)
Thursday, 30 November, 2017

Congratulations are in order. My copy arrived in the mail today. And I do note that in between the exploding sauce bottles (what happened there? Excess fermentation?) and all the other minor disasters, you created some beautiful words! The edible weed book is very good.

Yeah, the growth is crazy this year, waist high is not an exaggeration - and my mower blew up earlier this week. $160 to fix... Oh well.

Jo said…
Linda, well done you! I think you are officially wise at 70, is that how it works?? Ball juggling is all the better for the Stoic - so much more material to practice on..

Kate, this is exactly why I recommend a boring but necessary housekeeping routine. For people like me it is what gets us off the couch, for people like you it is so you know when to stop! We have to draw a line in the sand somewhere, and say, "Our work is done." I actually think our grannies with their routines were better at this than we are..

Anna, I think the habit of gratefulness confers much happiness and content. Who can be happy who is always finding fault or looking for something better?

Gretchen Joanna, so far I have avoided that problem. So far.

Chris, aargh! Really? I haven't seen it yet! Mail over the Bass Strait really earns its moniker of snail mail. I will be so thrilled to get my hands on a copy!!

As for the mower, have you looked at scythes? There is a place somewhere near you that makes them. No, I lie, it is in NSW:

simplelife said…
I think you may be right about our grannies. I have this vision of them having time for a cuppa and a chat or even just a catch up over the back fence and always leaving time in their day for creating, stitching or knitting or baking etc, which served two purposes really, 1 to provide useful items and 2 to allow them down time. Maybe that's just a rose coloured glasses kind of hindsight. Routines are so useful, I just need to learn how to stop and say enough, the rest can wait.
Thursday, 30 November, 2017

Linda said…
Not sure about being wise at 70, but I do feel I am more " happy with being me". Don't worry what people think: if they like me, that's OK, if they don't, not my problem! I have now learned to go with how my body feels so if I'm not in the mood to do a particular job at that time I don't do it because I know another day I will and knock it off in a short time. Also, having had a few health issues, I listen to my body. If I feel tired I stop what I am doing, sit down, read the paper, do a Codeword, hand quilt, watch TV etc! And I don't feel guilty, not like I would have done in the old days.
Friday, 01 December, 2017

Jo said…
Kate, if you read old housekeeping manuals, or even old novels you see a pattern - housework is for the morning, in the afternoon you go visiting and take your knitting. I really think the key to this is only doing errands and shopping once or twice a week or so. Plus, our grannies never drove their kids to extra curricular activities..

Anonymous said…
I love Mr Aurelius. I have a copy of Meditations that I keep at work, and have been known to delve into it randomly to seek guidance. It's often on point, weirdly enough. My old boss used to have a dip as well when the moment was right. I love this quote You have power over your mind - not outside events. Realize this, and you will find strength. I can't alter stuff outside of my control, but I can control how I react to shit. Remembering on the other hand...
Tuesday, 05 December, 2017

Jo said…
Miss Maudy, that is a fabulous idea for Mr Aurelius! I had been trying to read all the way through, like a novel, but it has no continuity, so dipping in for daily inspiration could work wonders. That quote above - oh, I know. I'm trying..
Wednesday, 06 December, 2017