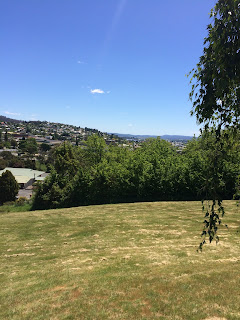 Convict Cemetery in Launceston. A quiet field under the blue sky.


For twenty years or so I have been winding my way up or down a particular hill in Launceston on a semi-regular basis. However, it wasn't until about eighteen months ago that I noticed the sign on a small side road that reads 'Convict Cemetery'. This intrigued me, but it wasn't until last week that I finally found myself with sufficient free time in front of me as I drove down the hill, that I turned off to find out more.

As it happens, I still know little more. The only information provided by the council is a board that reads, you guessed it, Convict Cemetery. Well, yes, but you know, who, what how, when.. I guess the where has been covered. A double row of bricks has been set into the path with the names and details of the convicts who are presumably buried here. I imagine that, at a guess, they have been inscribed by the pupils at the local primary school. This is a charming idea, but not much help if you happen to be doing genealogical research, as many of them are completely illegible. Here is one of the clearest: 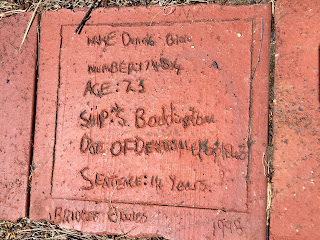 Dennis, whose name was maybe actually spelt Denis? To go with his French surname?
I just did some internet research, and the only convict with a similar name who arrived in Van Diemen's Land around 1848 is a Denis Brien. See? This is why you don't get eight year olds to preserve historical data. But it might not be Denis Brien at all. His ship, Boddingtons, as it turns out, arrived in New South Wales in 1793, which is rather early for a death in Launceston in 1848. If that is indeed a death date. And when Denis Brien's age is mentioned, is it the age he was when he died, or when he was transported? So many questions. This is why I am going to be a gardener, not a genealogist.

So let us turn from the cemetery to the woods. There is actually a perfect small forest next to the cemetery. 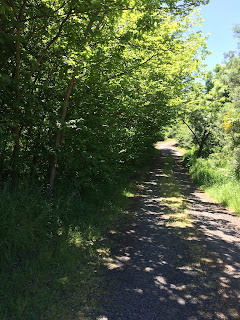 There is a pine grove, some beautiful oaks, 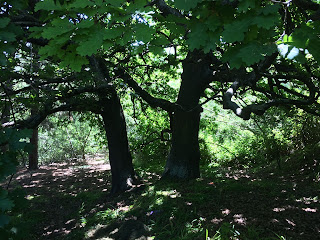 a thicket of elms. 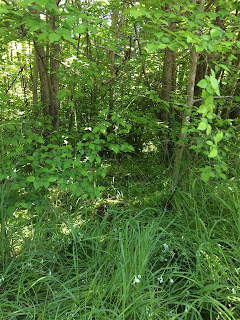 It's like the Hundred Acre Wood, but it is a one or maybe two acre wood. A perfect pocket of verdant treeness in the middle of the city, and I never knew it was there.

The moral of this story is, always explore down the road that is signposted 'Convict Cemetery'.

In a similar adventure I got lost at a TAFE campus this morning, but in the unregarded tiny parking bay where I ended up, I found a plum and an apple tree. Always a silver lining. Maybe I will remember to head back there in the autumn and pick some well-educated fruit.. 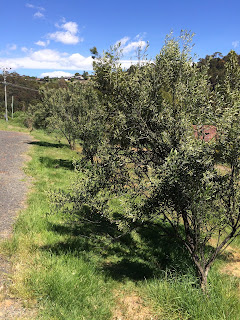 Also at the Convict Cemetery - olive trees. Worth a visit in the winter..
Labels: jaunts odd moments out

fran7narf said…
HAHAHA! Sorry about the "lost" at TAFE. It is hard to find D Block tucked away in the bowels of Alanvale Campus ;). Lovely to see you yesterday Jo and good score on the fruit trees. My interest is piqued about the mini forest and the convict cemetary. I have never seen them. Thank you for coming to visit me (getting lost) at TAFE :)
Thursday, 16 November, 2017

GretchenJoanna said…
I love to visit cemeteries. There are so many stories to be interpolated from the sketchy information, and pictures formed in my mind of the families represented and their history.

About Denis, it is the way my *Irish* in=laws spell Dennis : -) And two of these people who married were O'Briens at the time. Name history is also fascinating!!
Thursday, 16 November, 2017

What lovely photos of a pleasant spot. Thanks for letting us walk through it with you. Aren't cemeteries fascinating? I love it when we visit small towns and spot one and can walk through and try to imagine the lives of the folks buried there.

A mystery! And also a pleasant small forest too. Elm thickets are quite nice and green places, although someone once told me that elms drop lots of branches often on unsuspecting humans? Dunno.

Hope things have settled down. Gardening business. If you have any business questions, you can send a comment marked at the top with "not for posting". No worries.

Went to a seedling farm today in Bacchus Marsh. They do mail order: Plant Inspirations. It is huge.

Jo said…
Fran, thanks so much for the bags and the gooseberry plant. I have already found a spot for it in the garden. It was very exciting getting lost in a new place. I will be back for those apples in autumn..

jj, getting lost often leads to marvellous adventures, doesn't it? It sounds like you have experienced this phenomenon yourself..

Gretchen Joanna, there were several Denis O'Brien convicts, so you never know. I haven't got to the bottom of that particular mystery yet, but I feel like I want to track it down..

Pam, very old cemeteries are generally full of sad stories of dead children.. one of my friends was telling me about her confrontation with mortality, when she came face to face with a very old grave with her exact, quite unusual name on it..

Chris, small, pleasant forest - yes, that is exactly what it is! Thanks for offer of help, probably definitely need it :)
Tuesday, 21 November, 2017

Tanya Murray said…
Such a charming funny read Jo x Do tell, where is this cemetery? I'm fascinated.
Saturday, 20 January, 2018