Yesterday morning I popped into the vegie shed (just what it sounds like - a large shed. With veg. It is a farm gate outlet for a local farm. It also sells lots of other local produce at very reasonable prices. It is one of my regular haunts) for apples and carrots and milk. On my way out I saw pears selling for 89c/kg (40c/lb). I don't know if this is cheap for pears elsewhere in the world, but here it is very cheap fruit indeed, where anything under $2kg/90c/lb is a real bargain to stock up on. I walked right back in and bought a boxful. 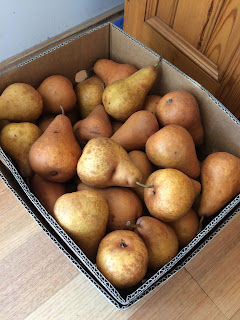 I ditched my other plans for the day and made pear butter (pears stewed down with lemon juice and zest, nutmeg and cinnamon, then blitzed with the stick blender). Then I bottled it and used my biggest stock pot to preserve them (just a fancy way of saying 'boiled the heck out of the jars for 15 minutes'). This is what 11kg of pears looks like when made into pear butter. 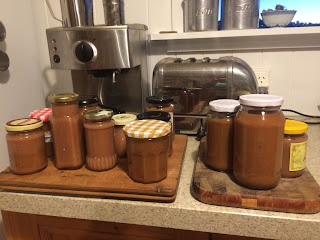 It is considerably reduced in volume. It is a delicious way of storing fresh, local produce in a convenient, shelf stable package. When I run out of room to store preserves in the kitchen, I shove them under my bed! I really like being able to have stocks of food that don't require filling up a freezer. Seeing jars of food in the cupboard allows the survivalist in me to relax and not worry about starving to death if the power goes off. Also, preserves are so convenient. This morning Rosy took yoghurt with pear butter and toasted oats for lunch in a thermos. It took several hours of my day yesterday, but will mean several weeks' worth of fast food.

I have no idea why pears were on sale in the spring. Usually these sales are on at the height of autumn. Maybe they are running out of space in cold storage at the pear farm? No complaints here. I would much rather preserve on a chilly spring day than a hot autumn afternoon! But.. I miss my fruit trees! I miss lots of free fruit to process into a year's worth of free food! I am beavering away at the garden to clear and build some terraces so that next year I can plant fruit trees.

Preserving food is so satisfying, but makes for a long and tedious job of peeling and coring. I amused myself by listening to random episodes from The School Of Life. These five minute videos by British philosopher Alain de Botton address those issues that are vitally important to our well-being but don't generally get covered in academic curriculums; Resilience, How to Forgive, Overcoming Bad Inner Voices and How to Complain are some of the topics you might encounter. Little nuggets of philosophical gold all wrapped up in the soporific tones of the planet's most soothing philosopher. What's not to like?

Updated to add: Pear Butter Recipe as per request from reader:

Peel, core and quarter pears while listening to philosophical essays of your choice.

Put them in your biggest pans - I distributed mine between my two biggest stew pans.

Now, this can only be a rough guide, depending on how many pears you start with - add about half a cup of water, the zest and juice of half a lemon, 2 Tbsp brown sugar, 1/2 tsp nutmeg and 2 heaped tsps cinnamon to each large saucepanful of pears. Cook with lid on for about an hour, or until the pears are soft and taste delicious, stirring occasionally to ensure they are not sticking.

Whiz up the pears with a stick blender or mouli, push them through a strainer, or pop them in a blender. At this point you can reduce the pear butter down further, cooking on low with the lid off to make a more reduced, thicker sauce. I was happy with my original blended sauce and bottled it immediately.

Collect your clean, warmed jars (I pour very hot water into them, leave for a couple of minutes, then tip it out again. You can also warm them in the oven). Put quarter of a tsp of citric acid into the bottom of each jar to ensure that the pear butter is acidic enough to preserve in a water bath. Ladle in the pear butter, leaving about a centimetre (1/2 inch) headspace at the top of the jar. Put the lids on and lower into nearly boiling water in your largest pot, covering the jars by a couple of centimetres (1 inch). A teatowel on the bottom of the pot stops the jars clinking around in the boiling water. Leave them on a quiet boil for 15 mins, then wrestle them out with tongs and a tea towel (I really must buy some proper preserving tongs as I keep dropping the jars using my cooking tongs..).

Now you have lovely pear butter to eat with yoghurt or spread on toast or serve with pork or make pear tarts, or maybe just eat straight out of the jar.. :)

Linda said…
Never heard of Pear Butter but I bet it tastes delicious. The pears were a bargain, no wonder you bought a box.
Thursday, 28 September, 2017

GretchenJoanna said…
That does sound like the most satisfying combination of food for the soul and the brain, preparing food for the body -- though I'd be hard pressed to know where the boundaries of those influences and nourishments lie. Botton is always thought-provoking for me - I might burn my pear butter!!
Thursday, 28 September, 2017

Jo said…
Linda, I have never made pear butter before, first time for everything - it is just blended up stewed pear really, or baby food as my girls pointed out to me:)

Gretchen Joanna, I nearly burned the second batch, as I left the room for a moment.. always a mistake, but that would have been a disaster! As it was, it just gave that batch an extra depth of flavour:)
Thursday, 28 September, 2017

What a heavenly food is pear butter! What a fine, big batch you have made!

Thanks for The School of Life.

Jo said…
Pam, I think it must be an American thing, because I had not heard of it before I went hunting for recipes for preserving pears!
Friday, 29 September, 2017

Maybe it did originate here. We also have apple butter, made the same way, just as heavenly. Oh, boy - it's apple season!