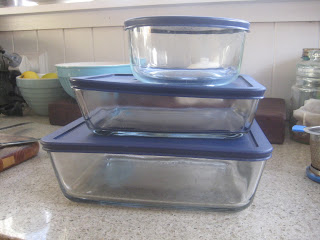 Well, it is July. We are rolling down the slope of the year now, and it seems like the perfect time to take on a new project. Along with thousands of other people, the girls and I will be attempting a Plastic-Free July.

Living plastic-free is one of my life goals. Plastic is just so unaesthetically pleasing. How can I possibly live my Anne of Green Gables fantasy life with plastic everywhere I turn? Impossible. Oh, and also it is breaking the planet. Honestly, of all the stupid things we have done as human beings, covering the planet in plastic has to be right up there. Just because we invent it, doesn't mean we have to use it everywhere, does it? I mean, we invented chocolate, but we don't make bags and cheese wrappers out of it, do we? See? My logic is irrefutable.

Anyway, one hundred years ago my great-grandmother managed to live perfectly well without plastic at all. Her name was Ruby and in July 1917 she had been married five years and my Grandma Muriel was about to be born. The plastic industry was then in its infancy.

It wasn't until my Grandmother Muriel became a mother herself in 1947 that plastic really began to worm its way into our lives in a big way. Plastic had been used extensively during WWII, and when the war ended industrialists all over the world had all these enormous plastics factories and all this raw product (ie, oil) and there was SO MUCH MONEY to be made, if only.. we poor suckers could be persuaded to buy plastic everything. And, guess what? We let ourselves be persuaded.

As with most modern inventions, plastic bags and cheese wrappers are not actually necessities of life. They do not make our lives better, they do not make our world prettier, and they create an enormous mess. But, they also make SO MUCH MONEY for purveyors of plastic ticky tack everywhere. Which is why they persist. But, never fear. We can reverse this process by refusing to have a bar of it. If we refuse to buy it and pretend it doesn't exist, eventually it will go away. Already we are seeing lots of paper wrapping and minimal wrapping options turn up in the marketplace. That's because consumers prefer it. So let's prefer it quite decisively and make it happen quicker, so I can live my Anne of Green Gables fantasy life sooner rather than later.

My first and only July purchase so far has been two lamb shanks from the local butcher. My Great-Grandmother Ruby would have got her meat in one of three ways. First, she was a farmer, so she probably ate meat straight off the farm. Second, butchers used to deliver meat straight to the kitchen table, unwrapped, from their van or cart, or else the butcher's boy would deliver it by bicycle, well wrapped in paper and string and balanced precariously in the wicker bike basket. Third, Grandma Ruby may have popped into the butcher's on a trip to town, and picked up her meat, also wrapped in paper. Now we often get meat wrapped in 'butcher's paper' but it is generally plastic backed, and the meat is pre-wrapped in a plastic bag.

Several years ago I tried to go plastic-free with meat but kind of gave up because it seemed too hard. But this time was going to be different. I armed myself with my glass Pyrex dish* and popped down to the butcher. I have faced blank stares and non-cooperation in the past with this request, but I was prepared to give it a go. This is how the conversation went:

Me: I am doing a challenge called Plastic-Free July, and I am wondering if you can weigh my container and put the meat straight into it?
Butcher: Certainly we can do that for you.
(Puts meat in container. I pay. She offers to keep the weight sticker and recycle it.. can you recycle stickers? I don't know - anyway, I said yes)
Me: Thanks so much. The alternative was becoming a vegetarian for a month.
Butcher: Well, that would have been a concern.. and by the way, good on you for having a go at reducing waste.

Well, I was gobsmacked. That was surprisingly easy. I believe it helps to choose a small business. I frequent two butchers, and this one is a farm gate shop in town, staffed by the farmers and their relations, who are generally pretty calm and straightforward folks. Also, I think reducing waste is an idea whose time has come.

A very popular TV program here in Australia recently has been a three part series called War on Waste (I have no idea if you can watch this outside Australia, but really, watch it if you can. It is fascinating and horrifying). So many people I know recommended it to me that I finally looked it up on-line and showed it to the girls. It appears to have taken the waste problem into the mainstream. Which is positively excellent.

*There is no reason why I could not have taken a metal container or a Tupperware container or even an old ice cream container. It is just that this is what I have.

Linda said…
Well done! I try to use as little plastic as possible but haven't been brave enough to take my own container anywhere. I buy meat and fish at the supermarket so I'm afraid they come in plastic and trays! Must try harder.
Sunday, 02 July, 2017

Jo said…
Linda, I think this is one of the hardest things, especially as I hate being the weird person in the shop! But that is why I did it on the first day, to get it over with. And it was brilliant! I do think the trick is to try a small business first. We will work our way up to changing the supermarkets (or, preferably, ignore them out of existence..).
Monday, 03 July, 2017

Anonymous said…
Good on you. And your butcher. Some butchers have told people they are not allowed to put meat in containers supplied by the consumers. Which is clearly crap. They just subscribe to the fear of unfounded litigation.

I loved the show. And the impact it has made on mainstream thinking. I'm not going plastic free, it's nie on impossible, but I am cutting back. At work and at home. And cutting waste, especially food waste.
Monday, 10 July, 2017

Jo said…
Cutting back is brilliant. I am having a go, but it actually is pretty impossible to be plastic free. Even the organic milk in glass bottles has plastic backed stickers on.. what? But every time I start something that I think is going to be impossible, it turns out not to be. Just annoying and inconvenient:)
Monday, 10 July, 2017