Will the Real Charlie Please Stand up? 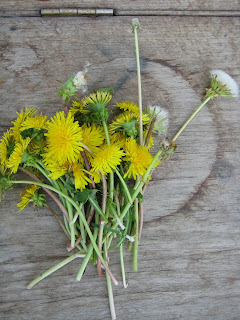 I woke up to glorious sunshine, the lawn awash with tiny golden dandelions, and was happy to be alive. My second thought was that potential home buyers might not be so excited, so I went and picked those little yellow up-turned faces. Then I had a handful of sunshine that I wanted to put in a vase, but that didn't really work with the selling-the-house look I was going for either, so I took a photo for those of you who appreciate pretty weeds as much as I do.

Three open homes this week which prompts me to ask: is it actually possible to die from cleaning? Will let you know as the selling season progresses.

Meanwhile, because tales of cleaning are boring, here is a tale of how to get a tradie in Tasmania:

Monique, who is a very lovely friend of mine, set off to travel around Australia six years ago, got as far as Broome and stayed there for six years. She finally made it back to Tasmania at the beginning of this year, and spent a month with tradesmen in and out of her house repairing six years of rental wear and tear. A couple of weeks ago I texted her to ask if she could recommend a good handyman. She sent me Charlie's number as he had been doing some painting for her.

I texted Charlie asking if he could do some work for me during the following week, and he rang back.

"You know I'm not a qualified tradesman? I can be an extra pair of hands for you though."

Excellent, that is just what I needed.

"Where do you live?"

A couple of days later I get a text from Charlie. "Actually, I am on my way to Greece, and will be coming through Launceston on the way to the ferry. I could give you two days work while I'm passing through?"

Magnificent. Problem solved. Then I text Monique. "Charlie can get here for two days. Is he the sort of person I could offer the spare room to?"

"Sure, I've known him for years, lovely guy. Will chew your ear off about Hinduism though.."

Well, you know, there are worse things to put up with..

Charlie arrived, ploughed on through the jobs I had for him, had dinner with us, was remarkably non-forthcoming about Hinduism, much to my relief, and told us that he was a photographer and had met Monique in Broome during the Kimberley gas hub protest.

"Isn't it a small world?" we say with great originality.

Next day Charlie remarked that he would text Monique and try and catch up as he hadn't seen her for ages.

"But weren't you doing some work for her recently?" I asked.

That's odd, I could have sworn she said Charlie had done some painting for her. Maybe I misread the text. My brain has been a bit sub-par recently.

Charlie texted Monique to arrange a get-together, and mentioned he was staying at her friend Jo's house.

"Jo who?" came the reply. Charlie sent my full name, and there was quite the period of radio silence. Half an hour later I get a phone call. It's Monique.

"Jo, I am sitting here in complete bewilderment. Who exactly do you have working at your house?"

"Oh my lord, I sent you the wrong Charlie! I have two Charlies in my phone, Charlie the painter who lives in St Helens and Charlie the photographer... but the other Charlie lives in Melbourne! How on earth is he painting your house???"

Unbeknown to Monique, Charlie had moved to Tasmania last year, and was totally unfazed when a strange woman contacted him asking him to do some handyman work for her on the recommendation of another woman who had known him briefly two years earlier as a photographer. Because seriously, that is often how you get things done in Tasmania. He will make a great local.

I hung up and headed outside to where Charlie was stripping paint off the side of the house.

"I have a great story for you, Charlie," I said.

Later I get another text from Monique: "I bet he doesn't know a single thing about Hinduism."

narf7 said…
Seriously, ONLY in Tasmania! What an incredible story Jo! One to tell the grandkids and also one to get you through this week of open houses. Your prospective house buyers will be charmed by not only you, and your gorgeous house, but by that lovely story. Better than hot bread in the oven and good coffee on the stove :)
Saturday, 12 March, 2016

Oh, my gosh, that's one of the most incredibly funny stories I've ever heard! You fly with some strange birds . . . It sounds like it turned out o.k. Have you shown the house a lot? Well, three times in one day, did you say - that's a lot! Soon, it will all be behind you.

Thank you for the dandelions and I loved the title of this post!

Gretchenjoanna said…
That is a great story. I'm so glad that the Charlie who showed up was also a fine fellow to offer a bed to!
Saturday, 12 March, 2016

Unknown said…
Too funny. Goodness, this turned well but could have been a disaster. He was staying in your home!!! Good luck with open houses.
Sunday, 13 March, 2016

Judy said…
Brilliant :-) Did not a moment of doubt creep in when he said he wasn't a qualified tradesman? So kind of him to offer to help anyway.
Monday, 14 March, 2016

Jo said…
Bek, darling, of course you do, along with all sensible people!

Fran, thankfully I am not selling my own house, will leave that to the charming young real estate agent with all the energy. I get to leave the house and walk the dog down to the nearest cafe while the open homes are happening. After all the cleaning I feel I deserve cake:)

Pam, four times this week so far. The cleaning, the cleaning..

GJ, yes, he was very nice, and he appreciated the story of how he came to be at my house as much as I did! He really wants to meet his doppelganger, 'the real Charlie' now..

Tanya, plumbers I think I would want licensed.. but word of mouth is really the only way to go. The lady at the post office always knows everything. Is there a post office in Campbelltown?

Lynda, disaster averted though, he was lovely. It's only in taking little risks that you have adventures!

Skippyherron, so am I glad I got help! Came just at the right time, I think the universe was looking out for me:)

Andrea, sounds like you might be a local.. seriously, everything here gets done by your neighbour's brother-in-law's best mate, doesn't it?

Judy, of course not. As mentioned above, neighbour's brother-in-law's best mates manage to cover most things.. and I didn't actually need a qualified tradie - just extra hours in the day, and Charlie provided that perfectly:) Plus, I wasn't in the mood to overthink things. I needed HELP. NOW. So glad it all worked out though:)

Penelope P. said…
Thanks Jo! What a brilliant story. I read it out to my husband Dave, and we were still laughing hours later!! Penny L in Dorset u.Kx
Monday, 14 March, 2016