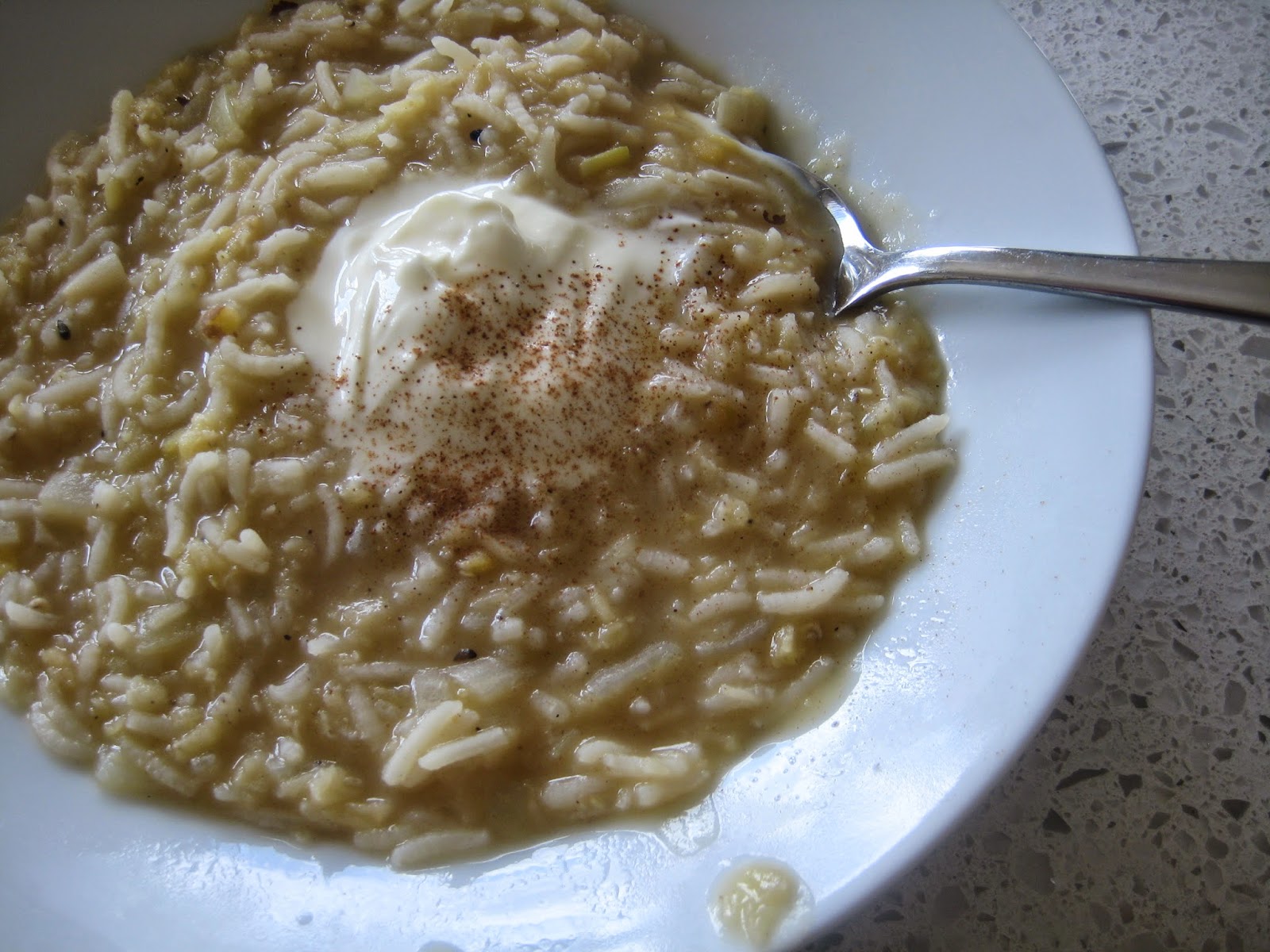 For the last couple of days I have had a nasty tummy bug, and did not eat for twenty four hours. Or stand up even. This morning I woke up feeling slightly better, hungry, but only for very specific things. Breakfast was a perfect, crisp apple.

Around lunch time my body decided it needed mujadara and nothing else, so because I am practising being kind to myself, I made me some. This is a Lebanese lentil and rice dish. The recipe was given to me by my friend Jane who often makes it for her family for breakfast. I sometimes eat it for breakfast, but it is more often a warming winter lunch dish. It is one of those dishes that tastes even better the next day. The original recipe calls for brown or green lentils, but I always use red. You can make a dry, fluffy version by boiling away more of the cooking liquid, but I prefer it like this, a soupier, more dhal-like texture which is so comforting for gently settling a delicate digestion..

Bring one cup of green/brown/red lentils to the boil in a saucepan of cold water, which covers the lentils by about one inch. Cook until done, around 15-20 mins.

Chop 2 onions and cook very slowly in olive oil over a low heat, 15 mins or so, until they are a golden brown. Add a teaspoonful of black cumin seeds which you have bashed a bit to crack them, also some cracked black pepper. A teaspoon each of ground cumin, coriander and cinnamon. A good pinch of salt.

Add 3/4 cup basmati rice to the onion mixture and cook for a minute or so, stirring gently.

Add 3 cups of water to the rice mixture, bring to the boil, boil until rice cooked, or until water absorbed, around 15 mins to my preferred texture. I must confess to having made this in the past, becoming a teensy bit distracted and coming back to a very dry dish indeed, with rather a smoky flavour underlying the spices... still tasted good though.

I like to serve this with a squeeze of lemon or lime, a big dollop of yoghurt, and a sprinkle of cinnamon.

This makes about six serves.

Comfort food from the store cupboard, which is meditatively calming to cook, and only costs pennies.

Anonymous said…
Poor you. I hate a tummy bug!

I get the "I just have to eat a certain thing". I need vegemite on toast recently - to cure a stomach ache.
Tuesday, 26 August, 2014

Anonymous said…
I bet the spices would feel restorative after an illness.
Wednesday, 27 August, 2014

Jo said…
Dar, it is a very gentle spice mix here. And goes down very easily. I feel quite restored now:)
Wednesday, 27 August, 2014

e / dig in hobart said…
vegemite on toast is a restorative meal for me too. i have never thought about those poor people living in vegemite- free cultures.
i hope you're feeling better jo. this looks delicious for a cold winter day.
Wednesday, 27 August, 2014

Anonymous said…
I guess in New Zealand and the UK they do Marmite on toast (shudder) but how the rest of the world EVER recovers from being sick I will NEVER know! ;)

Macaroni cheese is my big old comfort food and I used to make my mum make me a big old triple batch and bring it to me when I was sick. She'd tell me to go jump now!

Thank recipe sounds yummy although I'll have to figure out the logistics of making it with brown rice but it's definitely on the menu sometime.

I hope you're feeling a lot better too and that you're the only one to get sick. Nothing like bugs that everyone has the dubious pleasure of sharing. :(
Wednesday, 27 August, 2014

Jo said…
e and jessie, yes, we feel quite sorry for them, don't we, poor possums!
Jessie, this is a very forgiving recipe. Easy to add more water as you are cooking the rice if it needs it.
And yes, fingers crossed that everyone else remains healthy. So far, so good.
Wednesday, 27 August, 2014

And yes, Jo, Vegemite on toast would have been more simple. I don't think my disturbed stomach would ever get Mudjadara if it craved it after recovering from being ill. I would tell it to make do with vegemite on toast and to stop being so demanding.
Wednesday, 27 August, 2014

Beznarf27 said…
I wish I had this back on Sunday when poor Stevie-boy was suffering the very self-same stomach wog. He has just recovered from it but still has a tender stomach and has been living on soup. Fingers crossed I don't get it but if I do, this is going to be exactly what I crave when I emerge from the other side. Cheers for the share Jo :)
Thursday, 28 August, 2014

Anonymous said…
Beznarf didn't say that! I posted that as theroadtoserendipity! Blogger is being bolshie today eh? ;)
Thursday, 28 August, 2014

Jo said…
Lucinda, you are so assertive! I would do what you told me to as well. I bet you are a great teacher:)
Fran, commiserations to Steve. It was awful. I described the symptoms to The Boy, who said it sounded like a very bad hangover... which until now, I have never experienced, but clearly he has!!
Thursday, 28 August, 2014

Zena said…
This is my favourite dish. I am half lebanese. White rice is nice and gently on the stomach. Hope you feel better soon xx
Sunday, 04 June, 2017