Use What You Have 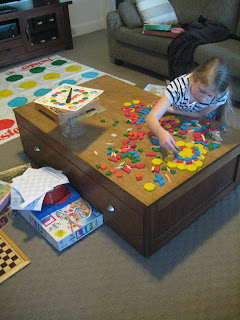 When my brother and I were very young we lived in a little town in the highlands of New Guinea. There were no toy shops. Our grannies sent us toys and books for birthdays and Christmas, but mostly we had the toys that we had, with no real changes from year's end to year's end.

My mum had a cunning plan though - she would hide a box of toys in a high cupboard, and every few months she would produce this box - I am thinking probably at the end of a very trying day, and ta da! New toys! It was like seeing old friends after a long break. They are simply delightful companions, because we all know absence makes the heart grow fonder. It is the same with toys when you are four. Oh, the joys of toys not seen for months!

This is a good way to add interest to anything of course - make sure it is unavailable for a while, because as humans we prize anything with scarcity value, and also love the shock of the new. But clearly we have short attention spans, because it doesn't have to be really new. Look at the hipness of retro-anything.

Anyway, my mum's brilliant ploy to extend the value of a small stock of toys and books is a useful way to make the most of lots of the other things we have, instead of buying new gear and stuffing up the planet.

Sometimes I rifle through the children's book case and bring out ones they haven't seen for a while, or some that are pertinent to something they are studying. I leave them casually stacked on the coffee table. As if by accident. And they pounce on them, squealing gleefully, 'Oh, I remember this!' and then we've lost them for the next hour. The books have been there in the bookcase all the time but they just needed to be SEEN.

I keep big construction collections, like Scalectrix, and boxes of puzzles and games in the shed, and bring them down periodically, like today. All the girls have been playing Twister and Battleships and Scrabble all day. Actually, I brought them down because finally we have a games cupboard downstairs that I could store them all in, but I'm having second thoughts about that...

And it's not just children that enjoy this activity. Who has a mending pile? I do. Sometimes I'm very good and mend everything during movie marathons, but mostly, I have a pile of clothes sitting in the mending basket for months. Lucinda did too, but yesterday she sewed on two buttons and now has two pretty new spring tops. I did the same thing recently ie, rifle through my mending basket, because I was desperate for something to wear that wasn't jeans, but was warm enough for cold weather, and I found this summer dress I have had for years. It had an annoying sewn-in belt, so I unpicked it, and now I have a tunic dress to wear with leggings, long-sleeve top and red cardi: 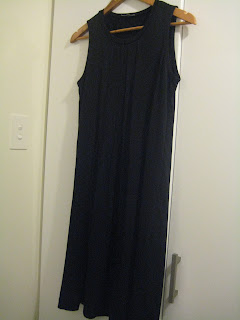 I also hit the jackpot - back when I was chronicling my autumn wardrobe I mentioned that I would love some black pants. Well, I pulled some out of the mending pile. I think I threw them there in a huff when I realised I had actually bought a size 6 from the op shop (didn't try them on, did I? They just looked about right). I don't know why I threw them in the mending - maybe I thought I would magically become stick thin? Anyway, I tried them on to see if there was anything I could do with them, and they fit perfectly! Magic? No. They are a US size 6, which makes them an AUS size 10. Miracle!

OK, next place to ring the changes - who has a cupboard filled with granny crockery that needs to be pulled out, dusted and used? Both Lucinda and Libi mentioned in the comments that they bring out their best tea sets and teapots for a lovely weekend tea party. I will be joining them tomorrow, and maybe pottering about hunting out some more pretty crockery for spring flowers and cupcakes.

And look up there on the tops of the cupboards - those baskets can come down for a week, and be filled with fruit, and we could pop daffodils in old bottles - an idea I snitched from Townmouse this week.

Has anyone else found something new and interesting in the back of a cupboard recently? Who else rotates collections, whether toys, clothes or crockery, to satisfy their itch to see something new, without buying new? I have a friend who moves her furniture around all the time. By herself. Including the piano. Her chiropractor profits from this.

PS Who had sausages in bread after they voted today? Is this a particularly Aussie thing? Here in Australia we line up to vote at the local school hall, where we meet all our neighbours, then we stand around and eat sausages and hamburgers and chat, because the school Parents and Friends association has inevitably set up a barbecue as a fundraiser. Sometimes there are cake stalls. This makes voting such fun (well, it would be better if there was a sensible party to vote for..).
Labels: clothes in mending not shopping organising parenting waste not

Unknown said…
Oh agree, there was no one i wanted to vote for but did anyway. Yep, snags at ours too but i went very early. I live across the road from a polling booth and so a couple of years ago we had a garage sale and Tom ran a cafe with coffee/tea/cans and lamingtons. $$$$$ I think we made $400 that day. Nope, havent found anything yet but then im not game to open my cupboards.
Saturday, 07 September, 2013

Jo said…
Lynda, I had to bribe the 8yo with sausages to keep her away from the garage sale. Such a brilliant business plan, well done on capitalizing on elections. Yes, I do hear you on opening the cupboards. It can be painful.. but sometimes there's a nice surprise!
Saturday, 07 September, 2013

Heather said…
I don't even have to hide old toys and things to bring them out at a later time. Whenever I tell my kids that they need to "deep clean" their rooms (not just the daily 'clean up the floor' bit) they discover things that they haven't thought about in years and end up spending all day in their rooms enjoying the forgotten stuff. Trouble is, it distracts them from the cleaning. Oh, well.
Sunday, 08 September, 2013

Anonymous said…
As someone who has NO talent when it comes to mending I am not one to delve into my mending basket (indeed I don't even have one...). I DO however recycle. I get the t-shirts that have a stain or a rip and I cut them up to make t-shirt material and make rugs and knit with oversized needles. I take the zipless jeans and cut them up and make denim material and do the same thing but make baskets and floor mats. Anything else get's eyed up for quilt squares for "one day" when I both attain a cheap second hand sewing machine AND learn to sew.I have a cupboard full of pretty cups and saucers that my dad left me when he died. Not my kind of thing and so I give them away to friends and family if they like them. We use mugs and mine needs to take at least 600ml before it can be considered a "real mug". Plus, Steve does the dishes and has that peculiar man habit of breaking all of my mugs in the process so I never use something precious. 50km out of town at 8.30am was a pretty sausage free event here at the Sidmouth hall but I noticed the tiny petrol station across the road was doing a roaring trade. At least SOMEONE benefitted from the election ;). Agreed on the sensible party thing as well...lets just start our own! I would vote for you :). "Jo for Prime Minister" Sounds wonderful... Queensland had a Jo, why can't we? Can you bake pumpkin scones? Might be best to put apple in them as it's our unofficial namesake ;)
Sunday, 08 September, 2013

Anonymous said…
Lots to talk about with you on this post, Jo. My mum hid and rotated toys. And I did too. And I still love discovering old, favourite books on the shelf and nestling down for a read with an old friend.

Now I don't know that a mending pile can be used to store skinny clothes? But I laughed at that tale - oh for a bit of magic to becone thin. That's why I hung onto the R.M.Williams black pants for years. But what luck for you. Or amazingly magic!?

I baked a cake for my son's school's cake stall. Actually two. Fell asleep while cooking the first one and burnt it. (Not totally wasted though. Cut the edges off andit is good enough for family.) And then I bought a cake and biscuits. And had a sausage sizzle and chat.

I love that feel of community and everyone doing their civic duty on Election Day.

What about the Pirate Party? Apparently they are not into pirates and the Sex Party isn't into sex. Whatever next? Oh, hang on. They are just following precedent. The Liberals aren't liberal and the Labor Party aren't into labour.

I really wanted a party that was into rum, eyepatches and wenches. Arrrrh, splice the mainsail.

Jo said…
Heather, 'cleaning' of course! a great way to get them out from under your feet during the holidays!
Fran, I would happily have voted for you too, except, oh, that's right, none of us want to be politicians. We're all too nice and honest..
Lucinda, I desperately wanted to vote for the pirate party. 'A parrot on every shoulder' would have been such a marvellous policy platform..
Sunday, 08 September, 2013

Anonymous said…
I think the main 2 parties are quite the pirates aren't they? I mean, steal from people and wench, drink and basically be bad. Sounds like a normal run in politics (although chair sniffing doesn't have quite the same ring as wenching now does it? ;) )

Toy rests in this house usually happen due t misbehaviour where toys are rested for X amount of days until the behaviour improves. It works the same way though. ;)

Jo said…
Jessie, I just read there that you arrested the toys! I love the idea of sending the more annoying ones to jail.
How thrilling that the pre-maternity clothes fit! That is such a good feeling!
Sunday, 08 September, 2013

SarahN @ livetolist said…
My mother used to be a perennial furniture mover - particularly in hotel rooms! (She did have five people to fit in during 'happy' hour!). I tend to hide nothing and try to use it all - and declutter the rest. It mostly works. I am happy it's warm enough now to un-suitcase the summer house dresses!! Not yet ready to pack away the 'warm' fleecey stuff though!