Forward Planning... Should I Just Plan to Fail? 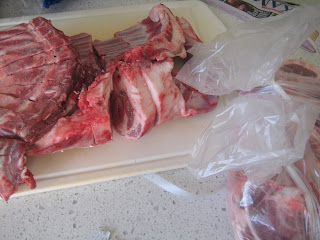 So yesterday was your average Saturday if you have kids... hockey final, school fair, ballet x2. Three children at four events at different times, and some of them at the same event, but at different times, and also some of their friends are commuting with me, and at one time, one of mine commuting with someone else. The Man is away, the minivan gets a workout, and so does my poor brain.

We did pretty well, considering. We only forgot the ballet bag, which I had to go back for, but luckily when I was swinging past the house anyway. Rosy was only five minutes late for ballet, which was, I think, a win in the circumstances.

However, in concentrating on one thing, our schedule, which is all my brain can cope with, the environment lucked out a little, which brings me to the point of this post.

It takes Planning with a capital P to drive less, make less rubbish, use less plastic. And that is not my forte. To wit: I had left the eight year old with The Girl at the fair while I watched Rosy's hockey game. Posy appeared, beaming, laden with three giant plastic bags loaded with plastic tat that she had bought with her pocket money. Glow sticks, plastic slurpee cups, tiny plastic toys. Aargh! At least the show bag from the fire service was all paper, with paper colouring books, and a cardboard fire engine money box to make. Well done CFS. And I bought some backyard chicken eggs from the CFS people as well, as a fundraiser. That's a plus.

There was lots of food in plastic and paper containers, and no recycling bins in sight. I bought a cup of tea from my lovely daughter at the cake stall in a paper cup. Then I bought a side of locally farmed lamb. 7kg of lamb in a cardboard box, wrapped in one big plastic bag. OK, it was a plastic bag, but really, very little wrapping for that much meat.

Until I got home, and realised I had nothing to store 7kgs of lamb in the freezer, except in plastic bags. Oh no. So now I have a freezer full of meat in plastic. Sigh.

But failing is good in that we learn from our mistakes, right? So, here is my plan. I need to keep a reusable cup or two in car. I've asked the next door neighbour to save ice cream containers for me so I have a stack to store unexpected largesse in the fridge or freezer. I'd like to find some sort of container that I can get take away food in, that maybe sort of looks nice too. Maybe something in stainless steel?

I need to talk more to the children about what they are buying, whether they do need 'stuff' and about what their 'stuff' is made of. The lucky dip, at least, was packaged in plain paper bags. And face painting didn't produce any rubbish. It would have been so much better to steer Posy towards spending money on the bouncy castle or pony rides..

If I was the sort of person who didn't prefer to gnaw her arms off rather than sit in a meeting, I could get on the school fair committee and have the conversation about reusing and recycling...
Labels: existential malaise organising out plastic free recycling reduce packaging reduce rubbish

Tammy said…
I admire your dedication to reducing your single-use plastics. It can be a difficult feat to accomplish.

I also fully agree with you about sitting through meetings. Perhaps a letter would do the trick!
Sunday, 15 September, 2013

Jo said…
A letter! Why does my mind always leap to the most difficult solution?
Sunday, 15 September, 2013

Unknown said…
Yes a letter. A real one on paper. I bet it would be such a novelty that they would read it out loud at the next meeting. Do it in pen and they would probably frame it. LOL Im the same as you and always jump in first, fixing things when perhaps it just needs "a letter".

e / dig in hobart said…
i want to know how the letter goes, too!
sometimes it is dificult to stick to your beliefs or values, especially when you're in public situations where thisg are less in your control.
sounds like a good excuse to buy more ice cream, jo :-)
Sunday, 15 September, 2013

Jo said…
Well, e and Lynda, I promise to publish said letter here first. Actually e, I'm feeling less and less bothered about what other people think (although the 13yo may not be so happy about some of my 'save the planet' actions in public, especially at her school!) - it really is just mostly a failure of planning when I find myself with a cardboard cup in my hand (you will never find me with a plastic cup in my hand though. Even without planetary considerations, tea in a plastic cup is vile, and no tea is always preferable..)
Sunday, 15 September, 2013

Anonymous said…
SO glad that my kids all grew up before we became aware that we were stuffing up the world with our choices ;). Seriously though, it's so difficult to find ways to package things. I am chained to my cling wrap and feel awful using it but whatchagonnado? Gotta make some of those fabric beeswax wraps...to spotlight today for wool and pretty fabric to make them (not the wool...just the fabric...) and am bringing you some free range eggs today. Most of the eggs are cram packed full of my plants so "enjoy" someone may as well benefit from the demise of my poor plants! ;)
Monday, 16 September, 2013

Heather said…
I think you are doing a great job, Jo. To be absolutely perfect in your quest to be as friendly to the planet as possible would be impossible all the time. Not everyone will be as conscious as you, but as long as you are conscious about your decisions you will be making more progress than not. I'm sure the longer you live this new lifestyle, the more prepared you will be as you go along. I really admire you.
Monday, 16 September, 2013

SarahN @ livetolist said…
I end up on all the fricking committees - and I fricking HATE meetings!! How does that happen? Enough about me

Good on you for saying no to tea if it's in plastic. I went and splurged on my glass for all my meat/deli needs, but half an animal would have me perplexed too. I ended up with clingwrap usage for the pulled pork, but I did resuse the clingfilm I bought it in, so that's a start, right?!

I care less and less what strangers think about my ways - most people also want less waste/garbage. The BF is a little embarassed to shop with me, and I hate it when someone knows nothing re:taring scales. Like, surely in a deli, that's a key skill, right? OH, I need more sleep. I'm on the rant way too much!
Monday, 16 September, 2013

Jo said…
Hi Fran, it was just lovely to meet you today - thankyou so much for the eggs from your chookies, and the kefir grains for my fermenting adventures! You have very sweet and funny daughters!
And I was thinking of making those beeswax wrappers too, but forgot to buy beeswax, because it wasn't on my list. Ah well, next week..
Heather, thankyou for always being so encouraging :) I'm thinking mindfulness is my new goal, rather than being perfectly rubbish free, which would involve become a hermit, and living like st Francis of Asissi. Which seems attractive some Saturdays...
Sarah, I think it's great that you are so proactive with your shopping. Funny about your other half though. I am imagining him lurking in the frozen foods section while you rage at the deli attendant...
Monday, 16 September, 2013