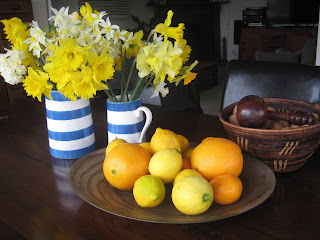 Winter treats - daffodils from a friend's garden, walnuts from another friend's farm, lemons from the garden - and photo carefully arranged so that Posy's giant craft mess at the end of the table invisible...

This winter it has rained, and rained, and rained some more. Days in the garden have been few and far between. Maybe it has been the indoors enforced thinking time that has persuaded me that what I really needed to do was to start a vegie garden program at Posy's primary school.

There is a vegie garden there already, several raised beds, a tool shed, two compost bins, all nicely fenced. Somebody had it built a couple of years ago, but there is no coherent plan for its existence. Sometimes the chaplain works in there with one or two children as a therapeutic exercise, sometimes a class teacher does a project out there with a class, but on the whole it looks pretty unloved, and most children never get to use it.

So you can imagine - an unloved vegie garden - how it tugged at my heart strings. The principal was very pleased to have something happen in it, so I turned up yesterday at lunchtime with a gardening friend, another school mum, and we winged it. We have two plans of attack - the children will be doing everything in the garden. It will be all practical, and hands on, and we have to find a way for the children to eat and maybe even cook what they grow.

Well, we unlocked the gate and had a look at the sad state of the beds, and made a bit of a plan. There was a tub of mini gardening gloves, and a tub of trowels in the shed that we set out. The lunch bell rang, and our designated Grade 5 helpers arrived, then at least twenty children raced in, eager to have a go. Well, the only food in the garden ready to eat was a bed of radishes that a Grade 5 class had planted several weeks ago. The children pulled some out and we sent them across the playground to wash their dirt encrusted treasures (we have a tap in the garden, but the handle has been removed and put in a safe place that we have yet to locate..). A few minutes later a parade of excited small children ran across the playground, waving bright red radishes in the air and shrieking with excitement. We cut them up, and everybody tried some slices. Some weren't impressed, but some loved them, and kept coming back for more. I can now say that there are at least twenty children in the world who have tasted a radish who hadn't beforehand. Only a single child there had tried one before yesterday.

For the rest of lunch we had the labour force busily digging out the perimeter garden bed, ready to become the strawberry bed. Last year Posy's class had grown some strawberries in pots for a science unit, and then had planted them in a spare bed in the garden. Of course, they have taken over the bed with their runners, and it is now a strawberry jungle. Next week we will liberate some of the best plants to put in the perimeter bed, and free up a whole garden bed for a spring planting. The children also wrote a list of their favourite vegies to plant. Their collective favourite vegetable turns out to be raspberries!

The enthusiasm of the children was just lovely to see as they busily weeded and shovelled and dug out the ornamentals someone had thought was a good idea to plant in a vegie garden. There is so much to do, but such an energetic labour force! If only I could borrow them for my garden...

And the rain? Held off until we were packing up. Good to know the weather gods are on board.

Has anyone been involved with a school garden before? Any good ideas or suggestions?

Tanya Murray said…
The bright yellow is just perfect in the Cornish Blue. Trevallyn primary school have just started up their veggie garden too in the last year or so and I bet they would have some practical ideas. Youngtown also have a very engaged veg garden. The one at Hagley farm school is wonderful, they also incorporate insect boards and lessons for science and they practice seed saving. I think a key would to try to foster some more parent help too and ensure there is a line of succession.
Tuesday, 06 August, 2013

Jo said…
Tanya, all brilliant suggestions, thanks. I might go on a vegie garden tour.
Tuesday, 06 August, 2013

Anonymous said…
What a beautifully arranged setting. You have hidden the craft mess well.

And what a beautiful project you have started! It will be so interesting for the students.

Are raspberries easy to grow? They seem such a delicate fruit! My favourite jam is the French raspberry jam. (Oh, and if I occasionally buy jelly, I will only get Aeroplane raspberry jelly, no raspberries I know.) I have a great recipe for a raspberry and yoghurt cake. So easy. So yummy.
Tuesday, 06 August, 2013

Anonymous said…
If the garden was school funded and didn't involve any outside help, surely you could apply for the Stephanie Alexander $40 000 school grant for getting schools involved with starting a garden? I have noticed that several recipients of this wonderful grant are now sad reflections of what they used to be. The reality of when the novelty wears off and getting kids and community members interested in long term veggie production takes over and suddenly it's not so much fun to do it day in, day out. If your school didn't apply for the grant you can. Find out how here...
http://www.kitchengardenfoundation.org.au/
Wednesday, 07 August, 2013

Anonymous said…
Have you tried applying for a Stephanie Alexander grant for the school?

SarahN @ livetolist said…
Aww so poetic. I remember my first radish at 8 in France - with butter and salt. It has a peppery taste to me... Nice work getting the garden up and running, reminds me of House Husbands, and some DIY show (the Living Room) I watched recently...
Wednesday, 07 August, 2013

Jo said…
Hilariously, Lucinda, I have never grown raspberries! Kids can unerringly find your weak spot! However I believe that if you have the right climate, you can do good raspberries. I do have plenty of people to ask, because everyone here grows raspberries.
Sarah, the kids were so gorgeous and enthusiastic, it would have made great TV - much better to see schoolkids building a garden than some of the horror reality TV shows around..
Thursday, 08 August, 2013

Jo said…
Hi Fran, apparently the principal looked into it, but to qualify for the Kitchen garden grant there is a minimum area that the garden must cover, and our space is too small :(.
On the bright side, the garden structure is all in place (raised beds, trellis, tool shed) and I just get to play in the garden with the children instead of sweating over a grant application, and possibly doing on-going paperwork?
Also, there is no facility really for cooking with the vegies, although there is a healthy canteen cooking program which the kids cook themselves, and they do use herbs from the garden, so hopefully we can expand the produce available to them. I am thinking of maybe taking a camping gas ring out there later on to see if we can do a bit of cooking - but nothing like the formal cooking classes in the Stephanie program.
Thursday, 08 August, 2013