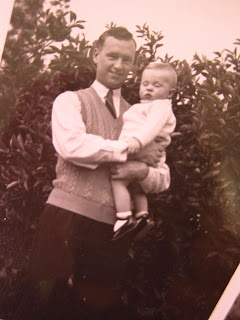 Today my grandpa died. He was ninety one. Here he is, holding my dad, in about 1947. Home from the war, a family man, looking natty in a vest knitted by my Grandma Hazel. He was clever, painstaking, witty. He always did what he felt was right, was courteous, well mannered, a good friend. He was also impatient, exacting, and had high expectations his children and grandchildren. His great grandchildren he just enjoyed.

He was the last of my grandparents, almost the last of his generation. He ended his days in the nicest nursing home I have ever been in, like a kind of hotel, but full of old people. He sat in his chair with his plaid rug over his knees doing sudokus and crosswords, bossing the nurses, and doing the rounds, visiting his friends who weren't mobile, holding the hands of 'his' old ladies. On Saturday afternoons he held soirees in the lounge room. Being the only person in the home who could work a set top box, he would tape old movies and episodes of Downton Abbey for everybody to watch. A very long time ago he and Grandma Hazel held 'at homes' on a Sunday afternoon for all their friends to come and visit for afternoon tea, and sing around the piano.

There is a gap now, in the family fabric. An entire generation has passed on, and are now stories and history, or a nose or character trait cropping up in younger generations. It is hard to see the legacy of an ordinary person. No statues or artworks or political reforms for most of us. So what is left? A man who worked hard for his family, brought up his children as well as he could, drove his children a bit crazy at times, but stayed close to them, stayed married to his wife for sixty years even when they drove each other a bit crazy, and looked after her to the end.

That tradition of working hard, laughing with your family, staying together, looking after them, and driving your kids crazy? Still with us three generations later. That's why, when the news came this afternoon, The Girl gave me a big hug, then set about baking, because nothing says 'I love you' like choc orange muffins. That's why The Man rang me from the departure lounge at Shanghai Airport, even though he knew he'd have to listen to me cry, and why The Boy popped home from his busy social engagements for an hour, to hug his mum, and make sure I was OK.

And me? I hugged the children, because that is my default reaction to any news, ever, and took a moment to watch the glorious, ragged, golden autumn sunset, with the sun going down on a world that, for the first time in ninety one years, doesn't hold the man who was my Grandpa Ken.

Heather said…
It is so hard when someone we love leaves. My thoughts are with you today. Take care.
Monday, 29 April, 2013

Judy said…
Thanks for sharing this Jo, it was really moving. My grandad passed away 18 months ago, but I still think of him. The memories never fade.

Anonymous said…
Sending hugs, Jo. You have painted a lovely picture of your grandfather. I think you are blessed to have had him in your life for so long and know the memories will live on.
Monday, 29 April, 2013

Bek said…
He sounds like a wonderful person to have in the family. My condolences.
Monday, 29 April, 2013

Left-Handed Housewife said…
So sorry for your loss, Jo! What a lovely, complex portrait. It's been a long time since my grandparents died, but I still think about them a lot and tell stories about them to my children so that they might know them a little. Stories help fill the gaps.

Everyday Life On A Shoestring said…
Sending you my love, around the world. You may not want to fly, but I'm sure it's the best thing you can do right now. I missed my Grandad's funeral as I was heavily pregnant, then his memorial service a few weeks later as I had a newborn daughter in special care. Although it had to be, I wish I could have been there.
Thursday, 02 May, 2013

Jen's Busy Days said…
Sorry to hear Jo of your Grandpa's passing. I still remember my Grandpa and I try to live each day as though he is watching me and will meet my "young men". I have only one great aunt left of that generation but I do have my other great aunt's book collection. She passed it to me before she passed as she knew how much I would value it. Old Weetbix and VitaBrits books with the cards. Old literature text books. Old art collection books. I cherish them and remember my greats and grands with reverence.

I hope your travels were not as scary as you thought and that you make it home safely.