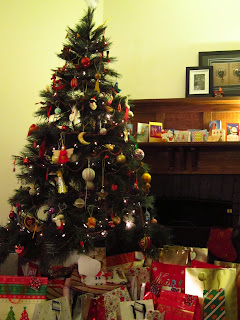 Well, Christmas was splendidly Christmassy, twinkly and happy, and miracle of miracles, didn't start till 7.15am. I think that is the longest Christmas sleep-in we have had for nineteen years. You can see the enormous number of parcels above, all wrapped in our reusable bags, some of which must be years old now. No, I didn't go mad in the Christmas season; well, no more than usual. The children love the excitement of lots of parcels under the tree (and so do I!), so as well as one special, indulgent present, I also save and wrap all the things I would buy for the children anyway at this time of year. Summer pyjamas, next year's school lunchboxes (a very big deal when you are 8 and 12), any summer clothes they need, and this year, replacements for the ragged beach towels they have all owned since they were toddlers. I have not yet been reduced to wrapping up the new year's school text books, but I did once pop toothbrushes into all the stockings!

So now it is the day after... and as the grocery budget has taken a beating recently, I have decided not to do the grocery shopping this week. I am not telling the family this, as they would panic, whine, and feel very deprived, but I'm counting on the fact that they won't actually notice that we are living out of the pantry and back of the fridge.

My first job was to reorganise the pantry, which had turned into the sort of place that your pantry turns into when your entire family uses it every day, and always put things back in the most convenient empty spot. I found all sorts of exotic ingredients that we can use up over the next few days, and also many pots of left overs in the fridge, some of which had sadly died of old age.

This year my New Year's resolutions will include a War on Waste. Living here at Chez Blueday will be like living with your Nan. During the War. On rationing. OK, there will be more butter. Lots more butter. But waste, on a societal level, but also here at home, makes me so angry. I think of all the work and resources and labour that goes into making the things we use and eat, and so much of it doesn't even get used for the purpose it is intended. So I will start here and now, and at least try not to throw out any more food...

I started this morning by stewing up some soft apples from the fridge with rhubarb from the garden, and we ate that for dessert tonight with whipped cream left over from yesterday's pavlova.

Then I rescued some potatoes that were trying to crawl out of the potato bin by themselves, and some lovely, nutty, sweet spinach from the garden, and a little feta, and made potato, spinach, feta triangles with puff pastry. Then grated up two of the first three zucchinis from my giant zucchini pot to make zucchini muffins. This used up the last three eggs and the last third of the last tomato that I found in a pot in the fridge (why would anyone put a third of a tomato in the fridge? Just eat it people). There was a moment of panic when I thought there was no cheese in the house, which would have broken my resolve. Can a family survive without cheese? But luckily, it was a false alarm. So that is dinner for today and tomorrow. 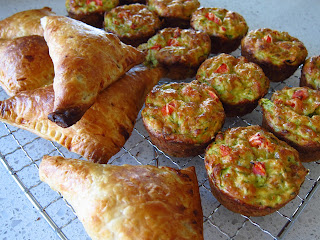 We are also nearly out of cereal, so The Girl made a batch of her irresistible muesli to pop in the oven after the dinner finished cooking. 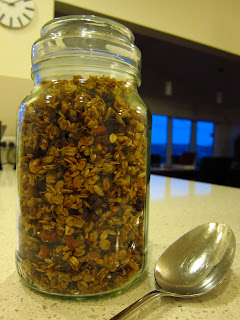 This is seriously the best muesli in the world, and very easy to substitute ingredients for whatever you have on hand.
Yummy Breakfast Muesli
3 cups (300g) rolled oats
3/4 cup (75g) chopped nuts
1 cup (90g) assorted seeds (pumpkin, sunflower, sesame, chia, poppy)
1/2 Tbspn cinnamon
2 Tbspns butter, melted
3Tbspns brown sugar
2Tbspns golden syrup
1Tbspn coconut oil
1/2 cup dried fruit
1/2 cup choc chips
Pre-heat oven to 165C
Mix dry ingredients in large bowl (except fruit and choc chips)
Melt butter, oil, sugar.
Pour onto dry ingredients and toss until well coated. Spread into high-sided, oiled tray and cook for 25 mins. Stir occasionally so it cooks evenly.
Stir again after it comes out of the oven, and after 5 minutes or so, add fruit and choc chips. We find you can cook dried apricots but not sultanas.
The origins of this recipe are lost in the mists of time, but The Girl has tweaked it so many times it is not the original recipe anyway...
This makes a large jar (love those Moccona coffee jars!), squashed down tight to fit it all in.
Very cheap and easy to make, but there would be about $20 worth of gourmet muesli in that jar, if we bought it from the local gourmet deli...
﻿
﻿

Jo said…
Let me know how it goes. Comment from daughter no.2 this morning - I don't think I like choc chips in my muesli...
This despite the fact that she has always liked them before. And who doesn't like choc chips in anything? Children ranged against me in economy drive...
Thursday, 27 December, 2012

menopausalrunninggirl said…
We will stand up to them though! Choc chips in a breakfast cereal? Sounds utterly gorgeous!
Saturday, 29 December, 2012

Left-Handed Housewife said…
I'm bound and determined to have a frugal 2013, to buy secondhand and use what we have around the house. Wish me luck!

By the way, I completely agree with your emphasis on butter.

Jo said…
Yes Frances, using things up, and not just food. Today I persuaded a certain 12yo that she could paint over a half used canvas for her craft project, instead of having me go out to buy a new one. Small victories! But I think it's a mind set to start asking myself what I could use that I have without going shopping..
Wednesday, 02 January, 2013