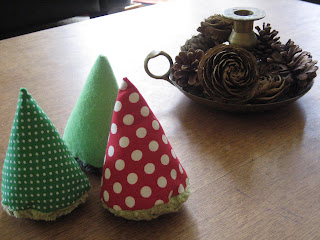 Yesterday I met dear Jenny whose blog I have been reading for some months now - ever since I clicked on her blog from a link and discovered photos of the Domestic Goddess's sewing box...she was at one of Jenny's Doll Making Workshops at the time, the one I was meant to be at, but was home sick and suffering on the couch instead. Actually, it was a blessing in disguise, because the Domestic Goddess (the clue is in her name) inherited the crafty gene from her paternal grandmother, whereas I....didn't.

Jenny was at our town's newest craft market - so many wonderful things. I bought a number of Christmas presents, mostly for myself, but got carried away and ended up lugging 4kgs of luscious local apples all over town. My arms nearly dropped off, but I like to think they will be doing me good twice. Once by developing enormous muscles while I was carrying them (I just checked - they aren't immediately visible, but I know they're on their way...) and twice, when I eat them. Oh, and locally grown apples are propbably good for you on a karmic level as well.

I bought some very darling things from Jenny, which shall remain darkly secret until after Christmas, but also these very sweet Christmas trees, which shall be this week's Christmas craft. I did have an ambitious decorative project in mind, but have decided to go with sane and simple instead. I think I am finally learning sense where craft and myself are concerned. Despite having many good crafty ideas I do not have a crafty atom in my body, and pretending otherwise just makes me and all my nearest and dearest very, very grumpy. Still, with the Domestic Goddess, and her two wee crafty sisters, I feel I have to make some sort of effort, whatever my natural inclinations, so we shall be wielding the glue gun and the embroidery scissors, depending on ability, to end up with something hopefully approximating these adorable creations of Jenny's.

How wonderful to be able to provide Christmas presents for my babies that are all sewn up with love and care by the Lady with the Crinkly Eyes. And how nice must it be to be Jenny – creating little soft dolly children, sent out into the world with love to be new best comforting friends to children all over the world.
Labels: creations friends out

Anonymous said…
Hello Jo- I'm calling in via JennyWren's blog and have just read back to the beginning of your blog.I had to laugh when, in one of your first posts, you said you're performing a community service in setting a low benchmark to make others feel better, because that's exactly what I often say about my housekeeping, and my children's behaviour in public.A relative recently told me seeing my place always makes her feel better about hers, which was quite worrying actually, as I'd always thought her place was about 5 times worse than mine.
I thought seriously about homeschooling, but ended up sending my children to a very small alternative independent school.Last year I started reading about unschooling and I really wish I'd gone into it earlier. The book you mentioned about the "well trained mind"was one I have on my Amazon wish list so I was interested in your discussion of it.
I keep coming across lovely Tasmanian blogs (I'm in Hobart.)
So nice to come across yours.
Sunday, 07 December, 2008

Jo said…
Hi Maryanne,
Lucky you - a small alternative independent school is exactly what we need up north.
And cheers for all of us whose housekeeping makes others feel better about theirs. We are community heroes.
Unschooling - I have an ambivalent relationship there - I unschooled by default through two pregnancies and new babyhoods, and every time I get the flu, but have never let go of my inner control freak enough to 'let go' altogether. I try to steer a thoughtful line between good humoured bribery to achieve my agenda and helping the children follow their own paths. Only time will tell how that works.
Lovely to hear from you.
Monday, 08 December, 2008