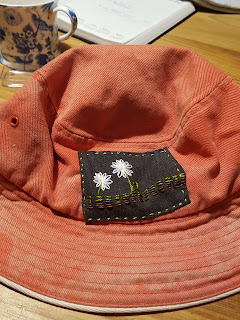 Magic is about effecting change, because you want to. It is change through an act of will. We all do magic all the time. The Australian people just did magic by choosing to change out the country's politicians. Good-bye old boys' club, hello to a bunch of determined female independents who want to get things done. Bravo.

This week I did magic by a) voting and b) mending a thing. Mending is seen by some as a domestic chore. It is seen by me as magic. You take a thing which is not how you want it to be, you do magic, and then it is perfect for its purpose.

This particular act of magic started with a hat. It had been abandoned on the side of the road, and sat in the rain for more than a week until I decided that no-one was coming for it, and I would have to rescue it. I washed it and sat and contemplated it. I liked its faded rustic charm, but I didn't like its badge advertising the Black Head Bowling Club. Mind you, I'd rather advertise the Black Head Bowling Club than any large corporation bent on doing evil in the name of profit. So there's that. But still, I wanted something more whimsical. I found it in a stack of denim patches that Red was embroidering a couple of summers ago. I snaffled one I liked and then stashed hat and patch in the mending basket for, oh, eighteen months or so.

And now we get to the moment last week when I claimed I was starting a mending club here at Chez Blueday. What was I thinking? Fora mending club one actually has to mend something. I don't want to mend things. I want to read Georgette Heyer novels and play in the garden. 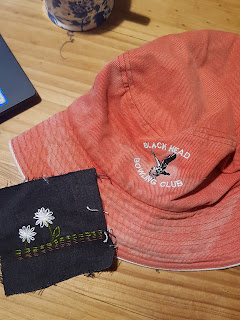 So last night I looked in my basket and pulled out the thing that seemed like the least work, and spent fifteen minutes sewing a patch on a hat. Whew! So much work! But I did it! I now have a charming gardening hat instead of a hat I didn't want to wear languishing in the mending basket. Magic!

And now, the most important bit. I have been looking forward to this! Did anyone else mend a thing? Tell us about it in the comments, send us a link if you put it on social media, or send me pics via email. Share the mending magic:)

Anonymous said…
Magic, indeed! I raise my hope filled glass to the Australian people! Change takes time and patience, my prayer is that they are given a chance to work before the vitriol begins...
As for mending...none. Love the hat, though!
Patricia
Tuesday, 24 May, 2022

Well done, and Sandra told me years ago of the rumour which suggests that because people have forgotten how to mend and repair items of clothing (respect for doing so), they accept clothes which are of poor fit and finish. Clothes are a deep interest for her. I must say that the hat put me in mind of Allan Seale, who wore such a hat way back in the day whilst he prognosticated upon plants, and candidly he probably knew more about plants than any normal person should! Such folks set the bar a bit too high for us lesser mortals. ;-) It's a good hat and my crystal ball suggests that it will serve you well.

Repairs, well there was the welding repair to the poly trailer last week, but the ongoing coffee machine repairs and maintenance are what inspires me. So hard to begin a morning without that beverage. I tell ya, everyone expects stuff when the day is yet young, and my brain is not so wired.

We've been constructing a much larger greenhouse over the past few weeks. And probably over the next few months the entire vegie beds will get moved to the sunniest spot on the property. The growing season just finished was brutal due to the cold temperatures and constant rain. Harvested about a handful of tomatoes. Oh well, there's always next season. I looked upon your harvests with a sense of wonder and respect.

Jo said…
Patricia, I am sure the vitriol has aready begun. However I am pinning my hope on the new Prime Minister's dog, Toto. I am sure that means we are all following the yellow brick road now, for trippy adventures involving lions and scarecrows etc.
I have much respect for the state of not doing mending. It would have been my preferred state, but here I am. At least I have a hat now.

Chris, yes, Allan Seale and I have a similar fashion sense, although he knew a lot more about gardening, probably still does, wherever he is now. I am looking forward to a blog post from you on Zen and the art of coffee machine maintenance.
I am still writing and hoping someone will publish one of my novels one day. Still writing for Earth Garden, although this next issue will be its last, as they are closing their doors... :(
Wednesday, 25 May, 2022

Alas, such people were put on the Earth to set the bar very high for us lesser mortals. I tell you truthfully, I wished I'd listened more to my grandfather about this plant growing stuff when I was a young thing. Now I'm left wondering what he was going on about? A mystery.

Mary said…
Jo, nice save. A good gardening hat is worth a lot. Red did a lovely job with that patch. Are there more?
Thursday, 26 May, 2022

Jo said…
Chris, you are very welcome. Re EG, I don't know, no-one was sworn to secrecy or anything. Everyone will know in a couple of days as the new issue comes out.

Mary, there were more patches, including some fabulous painted ones, but they all got snaffled by family. I have put some broad hints out there, but so far, nothing!
Thursday, 26 May, 2022

sustainablemum said…
What a delightful patch! I had not thought to embroider onto patches but I love that idea.

Mending here has been of the machinery type too, the dishwasher, fridge, washing machine, my watch and a camping stove all stop working as they should do in the past fortnight. Most are fixed we are still waiting on a part for the watch and the dishwasher is not proving to be an easy fix but we are determined to mend rather than buy new. I cannot claim any credit for all this mending my husband has done it all.

My mending tends to be of the knitted and sewing type, I don't currently have anything in my darning pile (which is what I call my mending pile)
Friday, 27 May, 2022

Anonymous said…
Liking the patched hat, Jo! I darned a couple of pairs of socks with some homespun wool, so now, after a few washes, I have socks with big, fluffy patches at the heels and toes. Ah well, as long as they don't start giving me blisters!

We almost always attempt repairs before turfing anything out. And even when a tool or small appliance is actually found to be a complete failure, my husband pulls it apart because he likes to investigate, for future reference.

Jo said…
Sustainablemum, wow, I cannot imagine not having anything in the mending pile! That is real dedication. I am thinking it ay tke me about two years to get through this lot, then I'l have a whole new pile..
I am super impressed about your husband's mending skills. All the men in my life have been the same. I don't know the first thing about electronics so I called out the repairman when my freezer stopped working last week. He took the back off the freezer, realised he needed a new part, banged the back on the freezer again, and it started working! I am recommended to just bang on the back of the freezer if it stops working again:)

Linda, liking your husband's curious mind. Reports from the Mending Club are more far-ranging than I imagined. Did you ever read The Wombles? I am imagining all the repair enthusiasts on here like Tobermory in his workshop, tinkering away at all the bits and pieces that the Wombles bring back from the rubbish bins of Wimbledon Common:)
Enjoy the fluffy socks. They sound very comfy..