This week has seen Australia's Black Lives Matter protests shine a light on our own shameful history of Aboriginal deaths in custody (when I say 'history' the latest death was confirmed last week). My hope is that black activists and their white allies will be able to catalyse positive and ongoing change in these times where change seems to be the way that we are operating. If we can seize the day and change for good, what a turn around that will be for 2020.

My own way through change has always been to turn towards words, and to you who are reading these words rather than off watching a video somewhere, I also offer some more words today. Many words. My gift to you is two novels and a history book.

First is Alexis Wright's Carpentaria. This is one of the wildest and most extraordinary novels I know, by a woman who swims in words, five hundred and nineteen pages of them. She speaks her country in the Gulf of Carpentaria to life and as readers we just have to dive in and swim after her. Angel Day with her Virgin Mary statue scavenged from the town dump is unforgettable and Normal Phantom's cluttered humpy room full of the fish he mounts and paints for white people's fishing trophies is the classic artist living in his own world and trying to ignore his harpy of a wife, who soon leaves him for the more charismatic Mozzie Fishman. The plot zigzags between these protagonists and more, with the cast of the white township of Desperance like a Greek chorus, making a lot of noise but mostly ignored by the ancient inhabitants of the land who bicker and fight and see visions and travel along the pathways and spiritways of their country avoiding the white nuisance where they can, confronting it where they must, bludgeoned by it, and ultimately, transcending it. There is much tragedy here, but also very much dark and dry humour. Words swirl around in eddy pools and in wild storms and eventually you, the reader are tossed back up on the beach, gasping, but wanting to run straight back into those waves.

The ancestral serpent, a creature larger than storm clouds, came down from the stars, laden with its own creative enormity. It moved graciously - if you had been watching with the eyes of a bird hovering in the sky far above the ground. Looking down at the serpent's wet body, glistening from the ancient sunlight, long before man was a creature who could contemplate the next moment in time. It came down those billions of years ago, to crawl on its heavy belly, all around the wet clay soils in the Gulf of Carpentaria.
Alexis Wright, Carpentaria, Ch 1 From time immemorial 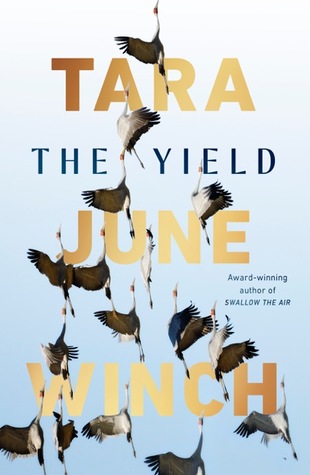 I read The Yield as a love story. The love of a young Wiradjuri woman for her grandfather Poppy Albert, her love for her country, the land around the town of Massacre that is threatened by mining, her love for her lost sister, and the discovery of her disappearing language. This last is a project Poppy has been working on in the years before his death, a dictionary of the words he spoke as a child and their meanings which weave in and out of the land.

August Gondiwindi must reach back far into the past, her own past, her Poppy's past and the history of the land itself to find out how to connect to her people and her country, and in hearing her Poppy's voice, finding her own.

I loved the family in this novel, the big, flawed, messy, loving family with no glossing over the difficult relationships, the dark secrets, the sacrifices, and also the love and the bonds that bind them to each other and to their land.

I was born on Ngurambang - can you hear it? Ngu-ram-bang. If you hear it right it hits the back of your mouth and you should taste blood in your words. Every person around should learn the word for country in the old language, the first language - because that is the way to all time, to time travel! You can go all the way back.
Tara June Winch, The Yield, Ch 1.


If your experience was like mine and very many other Australian schoolchildren we opened our history books at Chapter One, and there were the Aborigines, spears, kangaroos, boomerangs, tens of thousands of years of history and culture wrapped up in a few paragraphs and then they just faded out of the story to make way for white explorers and rugged pioneers who took up most of the rest of the textbook. Well, here is a different take that indicates that we have been totally sold a bill of goods in this country about what we think we 'know' of the pre-colonist history of this continent.

Covering topics such as agriculture, aquaculture, architecture, language and the law, Pascoe looks at a number of the diaries and journals of early colonial explorers and finds that their descriptions of the way of life of the first nations people of this continent contain a significant number of details that are missing from later accounts when white colonists had already begun cutting a destructive swathe of progress across the land. The evidence of agriculture and carefully curated hunting grounds, the permanent dams and settlements that colonists found as they took over these lands were either not perceived or deliberately ignored and  soon the delicate balance of native crops and the techniques that kept fertility in the soil were destroyed by pastoralists who farmed the land like they did back in England's very different climate. And of course, so many of the first nations peoples were destroyed by disease, genocide and forced assimilation that in many places those ancient traditions and technologies have not been able to be passed on.

There is some controversy about some of the claims in Pascoe's work. He is not a historian but a writer, he hasn't always used his sources as carefully as a historian might, and has drawn some conclusions which may not strictly be borne out by the evidence. There has also been a concerted campaign on the far right to discredit all of Dark Emu's contentions and the Aboriginal heritage that Pascoe claims. I read what I thought was a very balanced article looking at both sides of this debate (you will need to log in to read this but it is free). I see Dark Emu as a the work of a person who has discovered a whole bunch of old journals that hardly anyone ever reads and got really excited about the possibilities they present as a new window on a very old world indeed.  What this book has certainly done is to start a nationwide conversation about a subject that previously very few people were talking about. There appears to be enormous potential for further study and research into ancient First Nations agriculture and technologies at the very least. And of course, what is really being challenged here is the old notion of terra nullius, that the continent that was colonised by the British as a giant al fresco prison was inhabited only by people who did not use or shape the land to any useful purpose, and therefore could be taken over at will by any nation and that no treaty need be entered into with those original inhabitants.

And this, of course, is where we come back to today, and the fate of a people with sixty five thousand years of history on this continent, the longest continuing culture in the world, being treated as expendable in Australia's criminal justice system and still ignored in their claims as a sovereign people.

So, you know, happy reading..

Edited to add: I knew there was some controversy about Dark Emu so did a lot of reading about it - I think I confused myself more than anything. I want to make it clear that I think it is a book well worth reading. Much of the evidence in this book appears to me to be supported by direct quotes from early journals so it is hard to know where the controversy is. It is also a cracking good read..
Labels: activism books existential malaise first nations me soapbox this ethical life

L said…
Wow,, powerful message, you captured my attention for certain! I will be diving into these reading suggestions with keen interest, best wishes from Northern Ontario Canada!
Tuesday, 09 June, 2020

Jo said…
Laurie, I hope you do. I love to hear voices from many cultures and I think Australia shares many similarities with Canada in our history of colonisation, although I believe Canada has treaties with its First Nations..
Tuesday, 09 June, 2020

Tiny Toadstool Cottage said…
I am currenty reading Archie Roach's memoir and posted on my blog about him being a stolen child. I had a few comments from overseas readers that they had never heard of the Stolen Generations, so I am putting together a potential reading list as well. It is terrible that we still need to be discussing these issues at all - when will the world ever change?
Wednesday, 10 June, 2020

Jo said…
Tiny Toadstool, I would be very interested to see that reading list, do post a link to it here when you put it up. I have been immersing myself in first nations writers over the last few months and sometimes I feel like I live in a completely different world. I really hope that these protests open up a window on the first nations experience. We have been wilfully blind here in white Australia for all the years we have been here.
Wednesday, 10 June, 2020

Anonymous said…
Will add these books to my list. So much to ponder about, and take responsibility for. Thank you.
Patricia/USA
Wednesday, 10 June, 2020

Jo said…
Patricia, let me know what you think if you read them. And yes, so much to ponder and learn from what is going forward.
Wednesday, 10 June, 2020