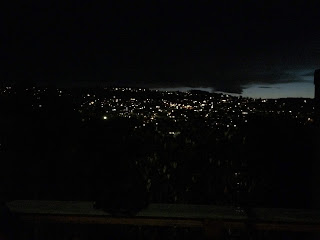 Sunday night I rugged up in coat and scarf and took a glass of red outside to view the International Space Station going overhead before dinner. My neighbour once worked at one of those giant dish telescopes, tracking the ISS, and often lets me know when it is heading over us here in Tasmania. Since there was approximately 90% cloud cover at the time I did not get to wave at the astronauts (by the way, this is something everyone in the world can do for free fun. The ISS circles the Earth every ninety minutes - there is a website and an app which lets you know when it will be zooming over your house during the night hours. It crosses Tasmania several times a month. Possibly. Sometimes I don't really pay attention when people tell me things..).

Still, I was outside, in the dark, with a glass of wine, so I stopped and looked at the twinkling lights across the valley. Then I noticed a blackbird warbling its goodnight song to the neighbourhood. Then I noticed another sound in the background which I didn't recognise at first until suddenly I realised it was a frog. A southern brown tree frog which is a very common local frog - but I have never heard it calling here in suburbia. I was so cheered and charmed to hear its little song. And there I stood, dinner time in suburbia, lighted kitchen windows all around, and I was alone in the dark with twinkly lights, serenaded by a blackbird and a brown tree frog. The cat jumped up on the verandah rail next to me and purred happily in my ear and I asked myself how it is that I am so fortunate to live a life where such moments of small but perfect happiness abound?

I am writing this on Wednesday afternoon from my bed. On Saturday I went walking in the bush at Paul's place in the sprinkling rain, which was a lovely way to spend an afternoon. Some hours later I noticed a slug crawling across my kitchen floor while I was cooking dinner. Then I looked closer and realised it wasn't a slug, but a leech, happily replete from hours of feeding. It was huge! Then I looked for the blood, and found it leaking from my ankle into my sock. Leeches send an anti-coagulant into your blood which makes a leech bite bleed for hours. Still, I've survived plenty of leech bites with effects no worse than a persistent itch as the bite heals. This one, however, turned red, swelled up and made me feel distinctly unwell. My children forced me to the doctor in the morning when I woke up and could hardly walk. Who knew, some leeches have nasty bacteria that they kindly pass on to their hosts? I really don't like taking anibiotics unnecessarily so the GP made a deal with me. She gave me a prescription, and drew around the swelling on my ankle. If the redness went outside the line I had to start taking the antibiotics. If everything started to get better rather than worse I could get away with not taking them. I had to go home and go to bed and put my leg up and read a book. Could I have a prescription for that? I asked. Yes, she said, it's her favourite prescription:)

So here I am, in bed with my leg up, drinking lemon and ginger with rosehip syrup. I'm getting better by the tried and true method of rest combined with granny herbal tonics. I think I will be able to avoid antibiotics. I'm not against them, by the way, as I quite prefer being alive to dying of a really nasty infection, but less is often more, especially where anitbiotics are concerned.

Swings and roundabouts this week. In one way I am a bit frustrated as I was just about recovered from surgery, and was getting into all sorts of projects, and now here I am confined to bed again. However, this is such a minor setback. Life could be hurling much worse at me, and thankfully, is not. Thank goodness for library books. What do you do to keep your immune system supported during an infection? I am looking for hints, as everyone but me around here seems to have an awful cold. I feel like I am living at a tuberculosis sanatorium..

simplelife said…
How wonderful that you got to walk in the bush in the rain, and you got to step outside and notice the frog. Not so wonderful about the leech although someone told me once that a leech can survive for 12 months before it needs to feed again. Not sure if that's true. I didn't realise they had the bacterial thing going on, I do have a friend who is a keen bushwalker and over her years of feeding leeches has now developed an allergy to them.
No help on the immunity building though, except to get enough sleep, the minute I get over tired or a bit run down I pick up every virus around.
Cheers Kate
Wednesday, 28 August, 2019

sustainablemum said…
Thank you for leaving a comment on my blog! I am so glad to have found your wee corner of the internet it sounds like we have similar interests/outlook on life.

I hope the leg is improving, like you I really don't like to take antibiotics unless absolutely necessary. They have their place and that is all they should be used for.

We use a homemade garlic syrup when we need support ourselves and stop the pesky colds and coughs taking over. We use this recipe.
Wednesday, 28 August, 2019

Treaders said…
There's a blissful peace in solitude isn't there? I love it. And I hope you don't need to take those antibiotics, but LEECHES!!! When I was in Australia the bloody things drove me nuts. How in the world can they get inside your shoe AND inside your socks??? Yuck!
Wednesday, 28 August, 2019

Anonymous said…
Hope you are on the mend soon! So enjoy your updates.
Love,
Patricia/USA
Wednesday, 28 August, 2019

Jo said…
Kate, oh, yes, sleep. Like you, I need a lot of sleep, also sleep seems to cure/prevent most of the problems in my life. I am a dormouse in human form!

Sustainable Mum, thank you for that great link on supporting the immune system - there's so much there to look at! Garlic syrup looks like it would keep everything and everyone away, up to and including vampires, no doubt:)

Anna, there is nowhere a leech can't go, including places you can't bear thinking about them being.. the worst I've heard though, is when they get behind your eyeball.. they come out eventually..

GretchenJoanna said…
It was clearly "in the stars" for you to enjoy more R&R before getting back into your hard work. This is so interesting to me, because the only kind of leeches I have ever met in stories are in wet places -- was this one, also? The Bush always makes me think of dryness, but after winter, I suppose even it might be wet...?

I immediately thought how preferable it is that you are recovering from a leech, and not living in another era when someone had applied leeches to you, trying to save you from a deathly illness. And if all goes well, you will only have the leech to recover from and not the antibiotics. Those moments of sublime stargazing, followed by your doctor's prescription (minus the abx), sound like they have you on the path to healing.

Treaders said…
Maybe I'm perverted but when you said there were worse places for leeches to get than inside your sock, the first place my mind leapt to was NOT behind the eyeball! But yuck anyway!
Thursday, 29 August, 2019

Kathy said…
Oh you poor thing...lucky you noticed the leech on the floor otherwise you might have had to guess what happened to your leg like maybe a spider bite so that was a good thing. Hope you are on the mend soon. Kathy, Brisbane
Thursday, 29 August, 2019

Jo said…
Gretchen Joanna, oh, yes, the bush, at the end of winter in Tasmania is a dripping wet, soggy paradise for leeches. They come out in force hoping to get a good feed which will last them through the dry months when they have to stick to wet creek banks.
And when I foolishly consulted the internet about leech bacteria, I discovered that if one is using leeches medicinally, there is a particular protocol to prevent this kind of bacterial infection. So clearly, leeches are still used medicinally.. somewhere. For some reason.. interesting..

Anna, that is EXACTLY what I meant! Women bushwalkers sometimes have to learn the hard way not to squat too close to the ground when responding to the call of nature..

Kathy, thanks, I am doing much better now, antibiotics avoided. And yes, you are right, and that is the first question the GP asked - did you actually see the leech? So I'm glad I did. On the other hand, I don't know of any other creature that can make you bleed like a leech, but there are some nasty spiders around that you don't want to be bitten by, so as I said, it could have been much worse!

Anonymous said…
Just the idea of a leech in my sock (or anywhere else) gives me the heebie-jeebies! But I do like your doctor's prescription. Our old family doctor used to prescribe hot milk with a slug of whisky for colds and flu, and that sometimes seems like an excellent alternative to over-the-counter drugs, even for people who wouldn't otherwise touch the stuff.

We watched the ISC pass directly over our house on a clear night a while back, and it was quite a remarkable sight.

Jo said…
Linda, that is another excellent prescription! My childhood doctor used to tell us to go outside and sit in the sunshine to recover from almost everything we went to see her about.
My favourite memory of the ISS is the first time I ever saw it, the first night I spent at Paul's cabin in the forest - every star sparkles in that deep darkness, and the Milky Way splashes across the sky, and the ISS passes solemnly overhead, like a very earnest small planet on a mission..
Thursday, 29 August, 2019

Anonymous said…
I hated leeches already. Now I have another reason. And have more worry about walking in the rainforests best my mother. The bush near me is usually too dry. Thank heavens.

As to immunity building - do as I say not as I do. Sleep, calming activities, different coloured fresh fruit, cups of tea and pieces of cake. (The latter two I do.)
Lucinda
Tuesday, 01 October, 2019