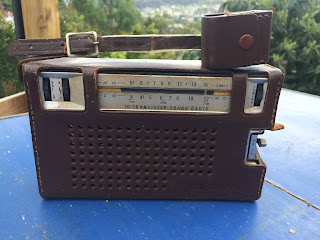 Last night Paul came over and we had a lovely dinner with the girls. We did a deal with them - we would walk the dog if they did the dishes. Amazingly, they agreed, and we left them slaving away in the hot kitchen while we went out into the cool evening air with Benson-the-enthusiastic-walkies-dog. After half an hour of striding up hill and down dale, we happened upon a.. skip. Oh, the excitement. Builder's skips are fun to explore, but this one was even better. It looked like someone had been cleaning out the house their elderly parents had lived in for approximately fifty years and never thrown a thing away. I think it finally got to the point in the clean-out when the children finally caved in exhaustion and called in the skip. So many treasures. And yet, we were strong. We left many treasures for others who may happen along, but happily relieved the skip-removers of some of their burdens. Luckily we found a mop bucket in which to pile the small treasures, and Paul bravely volunteered to carry the furniture.

I will spare you the finer details (one of those sprinklers that goes chick-chick-chick....whirrrrr in a circle) but cut right to the two most wondrous items. First, up above, a vintage short-wave radio that worked immediately we changed the batteries. It only needs to have a new aerial attached (Paul working on that as we speak) for us to be able to use the short wave to get Radio Minsk. As it is, it only works on AM radio, so everything it plays also sounds vintage. This is going to be an excellent addition to our picnic expeditions, but the next treasure we found will make them even more marvellous.

We found a fabulous fold-up picnic table with folding stools, circa 1967 at a guess.. 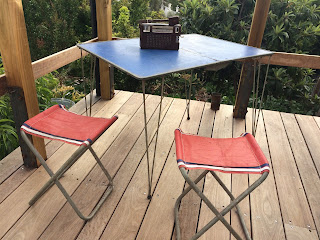 To pop it in the boot of the car for picnicking purposes you fold the stools and the table together which turns it into a kind of carry case, like a mini ping-pong table. 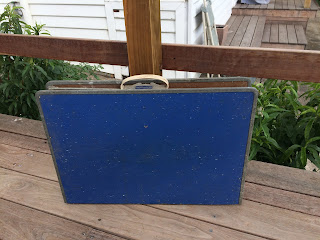 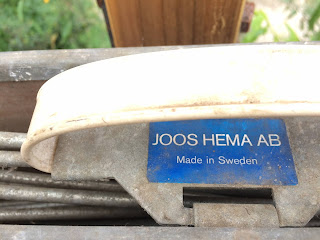 Fits perfectly behind the study door, ready for a quick getaway. 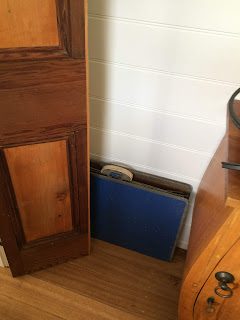 On the way home we stopped for a minute outside the Indian restaurant so that Paul could shake some feeling back into his arms (turns out the Swedish designed for durability rather than featherlight weightlessness back in the day). Inside the restaurant there were lots of couples having lovely meals accompanied, no doubt, by scintillating conversation, but we couldn't imagine that any of them were having half as much fun as we were having, walking the dog in the twilight and rummaging through a skip. This is how you know you've met the perfect man, when you agree that dumpster diving turns a pleasant evening into a great night out...

Anonymous said…
What a delightful date! Added bonus, you saved all those things from the landfill! Wootwoot!
Have a lovely week, Jo! (and Paul! )
Patricia/fl/USA
Sunday, 27 January, 2019

Oh - I am drooling! There are few things more exciting than coming upon an Aladdin's cave of treasures like those. I sometimes wonder why people get picked on for saving stuff - if they have the room - when it will eventually be a boon and delight for others.

Lucinda said…
Awesome finds! You should have been “greedy” and gone back with a car or a trolley. I think it will all end in landfill. You’ve rescued those pieces.

I love walking around when we have our area’s kerbside cleanup. So much is throw away. I bring home things and give them a new lease of life. I do “do” restaurants but I think your “date night” sounds perfect - who wouldn’t love having serendipitous finds while out walking???
Monday, 28 January, 2019

Jo said…
Patricia, yes, it's so good to be able to have such fun AND feel virtuous as well:)

Pam, we can all ignore Marie Kondo and live our trash picking lives as we see fit:)

Anonymous said…
Excellent finds, Jo. When we arrived with the removal truck at our previous house, it was almost obscured by a giant pile of stuff left out for the Council's inorganic rubbish collection that same week (in those days, there were two of those per year). We were too busy moving our own things in to look in the pile for treasure, but I was delighted that the previous owners had overlooked a wonderful old sandwich board sign, which I later discovered under the house, and which I still have in the dining room. Another great find was the metal base of an old treadle sewing machine, from a pile across the street, which is now a garden bench.
Linda in NZ

Jo said…
Using stuff that you find in an old house is one of my favourites. It's like bringing part of that house's history back to life, isn't it? I keep digging up blue and white china pieces from the garden, and recently found several pieces of old cast iron chimney grate while digging a hole to put a tree in. Using them is like giving the house some of its stories back..
Tuesday, 29 January, 2019

Anonymous said…
Oh Jo what an amazing find! I am about to be moving house into a beautiful home in East Launceston and have been frantically on the hunt for some new pieces of furniture and items for the home - and I much prefer second hand items! Any hints as to where in little old Launceston this skip may be? (If it’s even still there...) and while I’m at it, any tips on good quality second hand furniture stores around? My husband and I have mostly had second hand ikea / fantastic furniture style things while we were getting started - and these items are now on their last days so we are looking for some more long term investments! Have been driving to places like Deloraine etc to look at what’s around but word of mouth sometimes uncovers hidden gems!
Wednesday, 30 January, 2019

I have Marie Kondo's book. I mostly just like to pet it.

Jo said…
Anon, skip is in Welman St, but I doubt you will be able to furnish your house from it - although there was a little set of drawers and an ironing board. Plus a very ugly sofa right at the bottom. There are a couple of secondhand shops on Invermay Rd, handily right next to the Salvos store. Also, check out the auctions, Tulloch's and Armitage, also in Invermay, and Andy's Salvage near the tip, plus the tip shop while you are there. Youngtown Mission shop for vintage kitchen stuff, and close by is Tassie Old Wares on Youngtown Rd.
All the best for your move - I moved out of East Launceston two years ago, and it is a lovely place to live:)

Anonymous said…
thanks for the tips Jo! have lived in Launceston my whole life and didn't know about so many of those places. will have to convince my husband that we need to check them out this weekend... I have FOMO! I also love East - grew up there and went to school there, and hoping my future children will enjoy the same!
Thursday, 31 January, 2019

Anon, if you like mid-century modern, the Junk St Store in Invermay:)
and the other one along Invermay Rd whose name escapes me. Left hand side heading out of town..
Thursday, 31 January, 2019