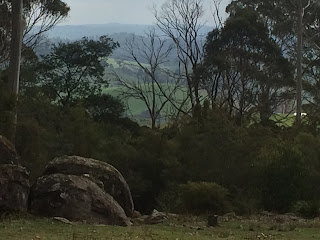 Up on a green mountain lives a tall, thoughtful man who is curious about everything and whose interests include star-gazing, tickling spiders, talking to birds and inventing things. He lives in a small green tin cabin which he built with his two capable hands. Actually, mostly he lives on the wide verandah outside the small green cabin. On one end are chairs and a bench in the sun. At the other end is the boiler and the wood, an old plunky piano and a macrame bird feeder. It is easier to talk to the birds if they are close by. Sometimes the birds and the lizards come up to the front door and peer in to see if there is someone to talk to who is willing to share his dinner. 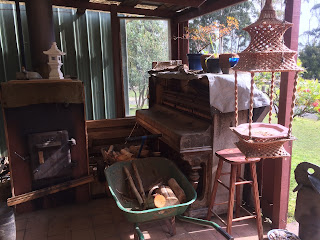 Here is the old plunky piano. It is apparently a necessity in an off-grid cabin. It also serves as a useful plant stand. 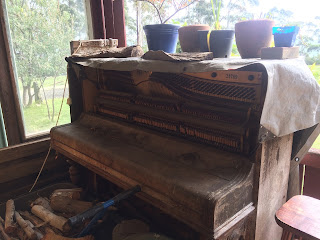 Here is the wood-fired boiler which is the heart of the house. Even though it is actually outside. It is lovingly and carefully tended and it never goes out. Even when Paul comes into the Blueday city cottage for a night, the boiler is still quietly burning away when he gets back the next day. In fact, he starts to get a little twitchy by the afternoon and I can feel the boiler pulling him back to the mountain.. you've heard of the household deity? This is the cabin deity. It heats all the water and it also heats the big old metal radiators that keep the cabin warm in the winter. When it is cold and wet the radiators are often draped in washing or drying the tea towels. On a cold morning there is nothing better than warming up your clothes on the radiator before putting them on. So delicious. 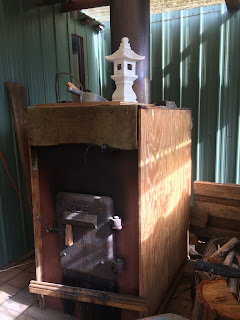 Here is another household deity. One of the many sculptures made by Paul's father that appear unexpectedly around the property, under trees, on top of rocks, peeping around corners. I particularly like watching this rather stoic portly gentleman when it rains. The water runs down his face and drips off his chin and he just stands there and meditates thoughtfully about Life and Rain, and Why Birds Sit On My Head. 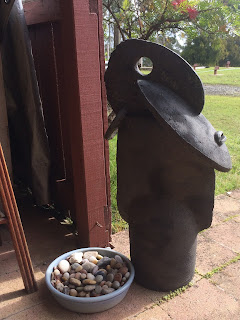 This is the current vegie garden. It is spectacularly productive and bursting with kale, spinach, red chard, and of course, tarragon. It has a little electric fence around it to deter possums and wallabies. When it is turned on at night a string of fairy lights also lights up to remind us not to go picking spinach in the dark. 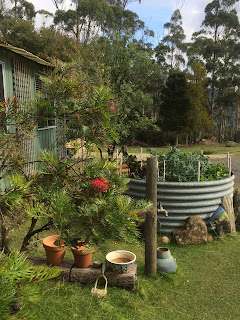 The electricity for the fairy lights and various other things comes from six solar panels in the summer and a water turbine in the creek in the winter. High summer and deep, wet winter are times of plentiful electricity. Right now, when it sometimes rains for a few days and there is no sun, but at the same time the creek is not running gustily enough to leave the turbine running for very long, producing electricity can get very exciting. Tramps up and down to the dam to check the water levels in the dark with a torch. The drama of starting up the water turbine. Constantly checking the lithium battery bank to see how much electricity is magically stored there. Only vacuuming when the sun is shining or else when it is raining and the water turbine is running. I think this is a very satisfactory way to live. It keeps you very aware of how much energy you are using. There is no magic 'away' where the energy is produced. It is made right here, right now, with sunshine and water. Every light globe needs to be thoughtfully considered. It is a very thoughtful, deliberate way to live. 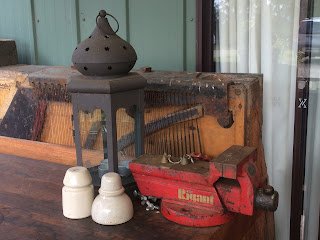 And it is not just energy that needs to be considered. Paul gets his water from the creek which needs to be boiled to become drinkable (one day there will be a fancy filtering system). His waste water is treated in a series of pipes and French drains and a home made septic system. There are no town services reaching his block at all. He doesn't have rubbish collection, so he has learned to produce very little rubbish. Every few weeks he takes a small bag of rubbish and recycling down to his sister's house in the village. To be honest, it is mostly wine bottles. I often help with that.. 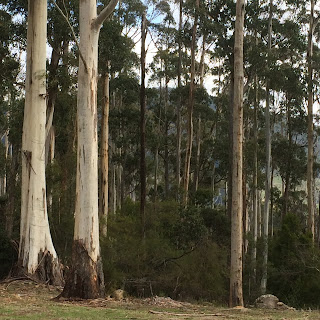 Of course, when I first went to visit Paul I inspected his book collection very thoroughly. The only book we have in common is Thoreau's Walden. For me, Paul's simple living project perfectly embodies the spirit of Thoreau's own experiment:

I went to the woods because I wished to live deliberately, to front only the essential facts of life and see if I could not learn what it had to teach, and not, when I came to die, discover that I had not lived.

Off-grid living teaches a thoughtful, deliberate way of life. Producing energy and drinking water and dealing with your own waste takes time and effort and makes all of those things precious. There is no place for waste or excess. It requires balance, that middle path. Not just taking the path, but creating your own as you go..

Darwin Girl said…
I love this man, he is everything Danny and I are working towards. Love this post.
Sunday, 22 April, 2018

Franny, I am with you on that, I rather like him myself! It has taken a lot of hard work for Paul to get to this point, but what I love about it is that he has achieved a life stripped back to essentials and the things that he loves. He can pursue his interests while living very cheaply. He could live in his little cabin forever, but its thermal design flaws annoy him, so he is planning to build a snug little house that is easier to keep warm so that he can live here comfortably for many years to come.. I know that you and Danny will get to where you want to be quite soon - you have determination in spades!
Sunday, 22 April, 2018

Thanks so much for giving us a glimpse into Paul's living arrangement. Incredible and wonderful. What a view he has, too. The first thing that caught my eye was the macrame bird feeder; how neat is that? And the boiler; very clever. And the sculpture - these are real treasures.

Thanks for the idea of the little electric fence. I have tried one on a large scale and was not happy with it, but using an electric fence around a specific small area might be a very good solution.

Treaders said…
Given your interests I can see why you like him. What an interesting man! Anna
Monday, 23 April, 2018

This man, Paul, knows a thing or two about living a Real Life, doesn't he? And your words describe it so sensitively. I have to admit to being quite old now, but my hut-making childhood doesn't seem so long ago, and I couldn't help a touch of the "if onlys" as I read this post. And the piano! A couple of years ago we visited my husband's grandfather's derelict (and sadly, now demolished) farmhouse in the far South, and there, in the collapsing living room, was an ancient piano. I felt a bit choked-up as I wondered about its history - who played it, and what did they play?

Jo said…
Pam, the macrame bird feeder came from a garage sale. Paul said it was calling to him.. the boiler came, I think, from a winery that wasn't using it anymore. It is hard to keep up with the back stories behind all Paul's things!

Anna, yes, it is easy to see the points of intersection, isn't it? I feel very lucky to have had this particular man arrive in my life.

Linda, ah, old pianos. They are so sad when you can see in your mind's eye that once they were the centre of family life. One of Paul's interests is making music in unusual ways. He has another piano that he has disembowelled (you can see it leaning against the wall in the seventh photo from the top) that he plans to take out into the bush and leave under a tree with rocks suspended over it so that when the wind blows the rocks will touch the strings and it will make music to itself until it sinks back into the earth..

Thanks very much for the insight into your beau's life. How good is off grid life? :-)! That Thoreau bloke was onto something, and it is surprising how little one needs for happiness. The blue gums look magnificent and I often wonder whether the trees lift the land around their buttressing, or the land has receded around the tree? Dunno. I get that about the fire too.

Meg said…
It seems that your Paul has everything he needs, pared-down to the essentials that meet those basic needs. Love that there's a clunky piano for music, definitely an essential for a good life & a healthy spirit. Had a good laugh at the electric fence and twinkle lights... Meg
Wednesday, 25 April, 2018

Jo said…
Chris, I think that the trees add layers of bark year by year to build up their buttress roots. They are magnificent, aren't they? I don't think they are blue gums though.. will find out. a lot of those eucalypts look so similar..

Meg, I do love that simplicity. Every time I visit I come home and want to get rid of more things.. twinkle lights. Yes. Perfect.
Wednesday, 25 April, 2018

Jo said…
Kate, I think it is fascinating the reaction to people who live simple, simple lives. Paul literally lives in a shed on some not at all expensive real estate which he has been slowly rehabilitating and improving. I think that maybe we look at people who have managed to pare down to a simple life as if they possess some kind of secret key to happiness. As far as I can see, it is this. Live in the cheapest way possible, don't spend any money, and basically, you can pretty much spend your life doing what you want to. As long as that entails something that does not require spending money. It will likely rest on some other values completely.. and, huh, there you have turned the central idea of our consumer society on its head..
Saturday, 28 April, 2018