Remember how I spent a lot of the summer worrying about Tasmania's drought? Well, now there are unprecedented floods sweeping our poor, benighted state. The next suburb over slopes down to the river, and all afternoon parents streamed into the school office to collect their children as they were evacuated from their houses on the river flats.

Thankfully our cottage is high on the hill, and thankfully I did some actual forward planning last week (unusual for me) and brought in wheelbarrow loads of wood and stacked it up in the storm porch so I don't have to wrestle with the elements to keep warm.

Our picnic last week was such a success (that picnic spot is currently under water) that we decided to go on another adventure this Saturday. We knew that a week of rain would begin in the evening, and we decided that some fresh air for everyone was in order. This time we took some friends and all our dogs. We drove several kilometres up-river from last week's destination, to a nature reserve. We lit a fire and made smores (Australian readers - Granita biscuits and dark Lindt chocolate make a lovely smore to go with your toasted marshmallow).

Again, there are 'proper' walks to take in the area, on paths, with signs and the occasional hand rail, but no, the children went off-piste again, this time with three dogs all running in different directions. At one point, while hunting for one lost dog and a couple of missing children, we all converged on a cliff far above the river, looking out over this enchanted landscape: 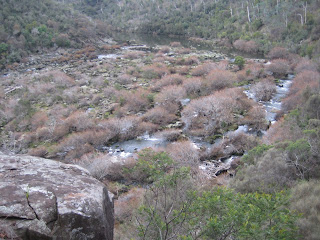 Now, I have walked the official paths in this reserve for fifteen years without ever stumbling across this stunning view. One of the eleven year olds gasped, "It's like a fantasy world in a book!" and the other one said, "It's like we are in Lord of the Rings!"

Again it feels like the universe is calling, "Stray off the beaten path.. see what you can find.." 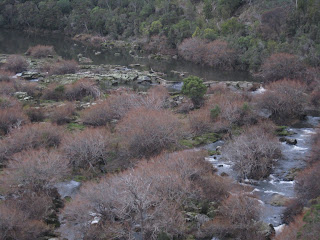 What we actually found was a glimpse of a supremely happy beagle bouncing from rock to rock down a neighbouring cliff like a mountain goat, and we all straggled after him waving and yelling. Later, on the way home said beagle threw up half a dead wallaby he had been happily chewing when we found him (a long dead wallaby). And later, Rosy found a giant, swollen leech attached to her leg. Adventures have their ups and downs..

On Sunday I nobly allowed Posy to host a house warming tea party for her friends. 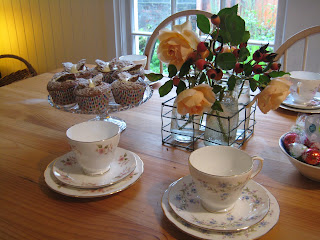 We used the granny tea cups. I cut the roses that are still madly blooming in the garden, even though it is winter. 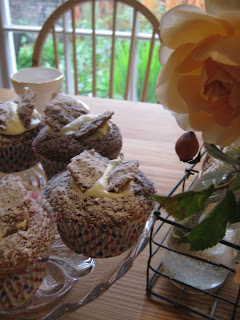 And Posy made chocolate butterfly cakes all by herself. All the adventures.
Labels: children festivities happy jaunts out

Eva said…
What a wonderful adventure finding new views. I am happy to hear that you are getting water after the drought but flooding is never good. Have a great week
Tuesday, 07 June, 2016

Anonymous said…
I love butterfly cakes but have never made them myself. I never get to the fiddly stage. I must rectify this some time.

Hope your garden loves the rain and you are all snug and dry inside.
Tuesday, 07 June, 2016

Lucinda, I have never made butterfly cakes either. I leave fiddly cooking to the girls. If it isn't mixed and in the oven in under ten minutes with no extra fiddling required then it doesn't get baked by me..
Tuesday, 07 June, 2016

It is going off like a frog in a sock in your part of the country! Oh my goodness. One benefit of older houses is that way back in the day, the old timers wisely recognised that it was probably a bad idea to construct a house in a flood plain or against a creek, river, swamp etc...

I hope you are all staying safe and keeping toasty warm in front of the wood fire? Nice forward planning too. Respect. I have had to develop an interest in the weather forecast as it is sort of hard to ignore it all and be caught out unawares. That seems like a long time ago in a past life!

Ah you have proven that dogs truly have no sense of taste. Ah, the delights of leeches - the rotten little ...

Left-Handed Housewife said…
We have had a great deal of rain here this spring, and I'm pretending we live in England (otherwise I'd go nuts).

I like the look of your new house very much! I don't know what butterfly cakes are, but now I have something to look forward to when I come visit (wouldn't that be nice?).

Jo said…
Chris, it makes me twitch every time I see a new subdivision going up on the river flats. The difference is, I guess, that back in the day people had to build their own houses and didn't have recourse to insurance or flood levees etc to mitigate bad planning.

Frances, butterfly cakes are what all our Aussie grannies made for all those 'bring a plate' afternoon teas. That and jelly cakes and sponge fingers. Oh, happy days:) I promise that any time you pop in for afternoon tea they will be on the menu xx
Friday, 17 June, 2016