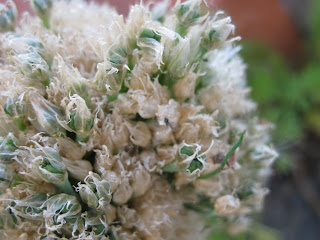 Rosy's photo of a spring onion going to seed.

I was contemplating reviewing the year of 2015, but there was quite a lot of it, most of which I have forgotten. Then I thought, maybe I could review 2016 so far, but again, a blur. So I have settled on reviewing today, which I am fairly certain is Monday.

State of the garden: weeds. It is very perplexing. Driest summer for years, but the weeds are flourishing. I am thinking of giving up the fight and cultivating a lovely weed garden instead. I could have delicate drifts of milk thistle, sunny massed colour bursts of dandelions, and stands of nightshade for their striking black berries..

State of children and animals: Children: All accounted for. Eat a lot. Make a lot of mess. Are going to visit their dad for a week. Friends have been asking, "But what will you do?" And I look at them strangely and answer, "Whatever I want, of course!"

Cats and dog have been having what is known as a Let's-get-into-fights-and-develop-mysterious-allergies week, because then they get to go to the vet, which they love, and it is so much fun for everyone else as well.

Chicken coop. Still sadly empty due to my lack of proactive-ness re sourcing any actual chickens. At least the chicken run is filling up with tasty and nutritious weeds which the future chickens will very much appreciate when they finally arrive.

State of administrative organisation: Ha. I finally 'encouraged' The Boy to fill in a vital form and took it and him to the Medicare office, only to be told that all of their computers were down, and we should come back maybe the day after tomorrow. I despise technology. Except that which makes anaesthetics work. I am very much in favour of that.

State of housekeeping: Ha. Lego all over the floor. Children baking and making things. And packing. And painting. Christmas is still with us. I am considering leaving the Christmas tree up until December. That would be cheerful and festive, right?

State of morale: Fraying. On the Medicare trip I also went to the hardware shop to get um, technical things to join hoses to taps. But, oh, then I accidentally wandered through the plant section, and oops, two came home with me. I am not, in any way proof against impulse buying yet. At least, not anywhere where there are plants or books..

State of anticipation: High. Lucinda is coming to visit tomorrow. We will drink tea under the pear tree and admire the weed garden and the Lego strewn floor under the Christmas tree, and it will be wonderful to finally meet the friend who has been kind and generally wise and hilarious over the last few years on her blog and mine.

narf7 said…
You recognised Monday? You are ahead! Have a great visit with Lucinda and tell her that you are being incredibly sustainable to only let the weeds that are edible grow and you meant them to grow where they are. Enjoy your week off and make sure you do all of the things you can't do when the kids are there :)
Tuesday, 05 January, 2016

Jo said…
Sara, it was SO much fun.

Fran, I would be more than impressed if could make weeds grow where I want them to. Or anything else for that matter. Most of my garden is accidentally arranged. My week of serenity begins at 8.10am tomorrow morning..
Wednesday, 06 January, 2016

Oh my! I had to laugh at your post as you have deadpan humour done to perfection! Very funny! :-)!

I saw the comic Fiona O'Loughlin a few months back doing a stand up gig at the comedy lounge in Melbourne and she said: I don't do comedy, I do social commentary - and you have channeled that on this post. Nice one.

Enjoy your week off and may you delight in the Jo-land and sit around and drink tea (or coffee) and read many good - apologies had to interrupt the comment as I'm tucking into a home made pizza (yum!), what was I saying, oh that's right - books and get stuck into some recipes and forget about everything else for a time!

PS: The photo is good and if you'll note closely the seeds as they mature look almost like tiny little onions.

PPS: The weeds are your friends, really, they're working hard for you in the garden, although you may not be aware of the how and why of it all! Seriously.

Jo said…
Ha, Chris, yes, here I am in Jo-land, and not one single person has asked me what is for dinner yet:)

I will have to look very closely at the mini spring onions. What I love are the miniature garlic bulbs in a garlic flower head.

I believe you about the weeds. Sometimes, I eat some, sometimes I appreciate the wonderful soil conditioning they are doing as they shade newly dug soil from the elements, and bring up minerals from deep down with their long roots, but mostly I just wish I had a minute to pull them out!!
Thursday, 07 January, 2016