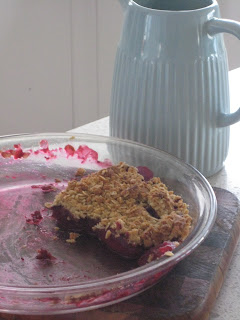 I am the person who always says 'Yes, please!' whenever anyone offers produce. I am the only person I know still accepting zucchinis. The other day a friend gave me a giant one that had got away when she left the house for two days. I gave it to The Man to carry (it was quite large), and he put it down on the table while we chatted. 'You are taking that home with you, aren't you?' asked my friend's husband, clearly worried we were having second thoughts. 'Just resting my arms,' muttered The Man.

My family love zucchini. This afternoon I was grating a large chunk of The Monster into the pan where I was sauteeing onion for a bolognaise sauce. 'Aaaargh,' shrieked Rosy, 'You'll ruin it! I won't eat any dinner!'
'Can I have cereal?' asks Posy, peering into the pan.

An hour later, Rosy is polishing off her second serving, telling me how delicious dinner was, and I don't have the heart to remind her of its monstrous beginnings.

Last night I went along to a gathering of like-minded souls, Tanya's Living Better Group, where we discussed using herbs in the garden, and preserving the harvest. Tanya is the Queen of Preserving, and I came away even more determined not to waste anything I am given, or growing, but to squirrel it all away for the future, or use it now instead of going to the supermarket.

So this afternoon I took out the bag of blackcurrants that someone gave me a week ago, and looked at them long and hard until inspiration struck. It had to be something that didn't involve Running Out to the Shops, so that narrowed the options. I decided on apple and blackcurrant crumble. My solution for any fruit with annoying pips and stones is to simmer it down in its own juice, mashing it down a bit, then pushing it through a sieve. This doesn't give you a lot of actual food, but it makes a lovely 'essence' of the fruit. Rosy mashed enthusiastically for me. In retrospect, white shorts for mashing blackcurrants probably wasn't a great fashion choice, but hey, when you're twelve, you're learning every day. Anyway, mixed with the stewed apples and some vanilla, under the crumble topping that I always keep stashed in the freezer for quick desserts, it was a dish that just tasted of purple. So yummy, and although we didn't have any cream or icecream, The Girl made her creamy, smooth custard that the little girls call 'chubby custard' for some unknown reason. Free food is good, free purple food? So much better.

Now I have a bag of laurel berries to make into jam. I have had laurel berry jam before, and I like its almost marzipan flavour, but I have a feeling there is something poisonous about laurel berries. Maybe you shouldn't eat them raw? I think I ought to do some research before I cook them. Free purple food is excellent, free purple food that doesn't kill you, even better.

And I have a plan for the zucchinis. I dried some to make zucchini chips because someone on pinterest said they were delicious. Those people on pinterest are terrible liars. However, Tanya dries them to add to winter stews, which sounds better, and I thought I could grind them into a powder and add zucchini powder to stews as a kind of thickener. It may work. I just won't tell the children.
Labels: children food jam local food not shopping waste not

Anonymous said…
Hi Jo, I have a zucchini recipe from a friend that is simple and delish. Slice zucchini into centimeter pieces, smoother in olive oil so all pieces are well coated, place in baking tray with chopped bunch of basil and tonnes of grated Parmesan. - the type in the fridge section. Quantity depends on amount of zucchini - 250g to 500g. Mix well.. Bake at 180, give it a couple of scraps so doesn't stick while cooking.
Saturday, 02 February, 2013

menopausalrunninggirl said…
I am envying your tales of summer harvests, I really am. I have never heard of laurel berries, but marzipan flavoured jam works for me on every level. Please send me some!!! Last year I made marrow, ginger and sultana jam, which sounds disgusting but I swear, it is the best jam I ever tasted xx
Saturday, 02 February, 2013

e / dig in hobart said…
i just know zuchini doesn't freeze well, unfortunately! you'll have to make pickled zuchinis which can be quite zingy. or lots of vegie slices!
never heard of laurel berries, and as i don't like marzipan i'll be giving them a skip.
blackcurrants also make a lovely syrup for home-made 'ribena' - lovely hot or cold!
Monday, 04 February, 2013

Heather said…
The crumble sounds delicious! Oh, I can't wait for spring when I can re-plant my zucchini and yellow squash plants. My family probably gets tired of it, but grilled, marinated zucchini is one of my favorite foods.
Tuesday, 05 February, 2013

Left-Handed Housewife said…
Purple food is awfully good for you, as it turns out, which is good news, I think.

I'll be interested t hear if you try ways of preserving zucchini. I have frozen zucchini slices in my deep freeze from last summer and need to do something with them before next summer rolls around. Maybe in a spaghetti sauce?

I never think to check my clothes before I start cooking, which is why most of them are ruined. Sigh.

Jo said…
I love the sound of that zucchini recipe Lucinda, and I do freeze grated zucchini that seems to disappear into winter stews without leaving a trace, which is excellent as my children regard zucchini in dinner as an attempt to poison them. I also love grilled zucchini for lunch, with an egg on toast, yum.
That marrow and ginger jam sounds like an old colonial recipe for 'mock' ginger - marrow cooked to translucence with ground ginger in a sugar syrup. Yum.
Frances, a couple of years ago I discovered The Apron. I adopted this radical garment so that I would not have to go clothes shopping so often. It works! But I am a slow learner. It did take about 20 years of daily cooking
for this thought to occur to me...
Wednesday, 06 February, 2013