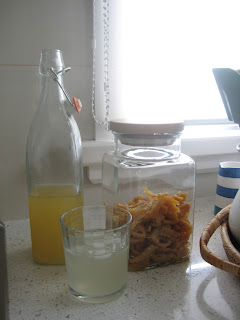 Lemons, lemons... I love them, all my friends and neighbours love them, and yet there are more. Time to make lemon cordial, and lemon peel, in time for Christmas baking.

I bought some bottles, picked a lot of lemons, and used this recipe, which is no different to every other lemon cordial recipe, but happens to come from a lovely local blog. 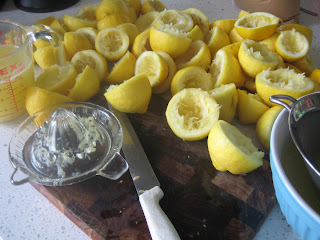 One and a half litres of lemon juice is a LOT of lemons. More than this. There had already been one trip to the compost... very wearing on the wrists. But once you have juice it is a very quick and easy process, and the cordial is divine, and so is the wonderful lemony aroma in the kitchen while it is warming. I am so excited to have another use for lemons, another preserving skill, another yummy product made entirely in my kitchen from my garden (well, if I had a sugar tree...). Posy demanded homemade lemonade for her birthday party (lemon  cordial, water, soda water, floating lemon slices, ice cubes), and now we have something nice for children to drink when they come over, so I don't have to offer fruit juice (yes, those children, who don't believe that water is a beverage..).

All those lemon halves left over? Well, inspired again by Tanya's blog, I cut some up and used Stephanie Alexander's recipe from The Cook's Companion (best cook book in the world for kitchen gardeners, arranged by ingredient. She has never failed me) to make lemon peel. First you slowly bring the peel to a boil several times, in fresh water each time, to take away the bitterness, then bring to the boil in a sugar syrup until the peel is translucent (takes ages), then drain and dry it. I dried mine in the dehydrator because I didn't want them cluttering up the kitchen for days. Then roll them in caster sugar, and store in a jar to snack on use for baking. It's a recipe that keeps on giving because you are left with a lemon-flavoured sugar syrup. Pancakes? Poaching fruit?

The more I learn how to cook from the garden, the more exciting cooking becomes. I would never have dreamed of poaching apples in lemon syrup, or that you don't need expensive Canadian maple syrup on pancakes, except that I had a by-product to use up. This, I imagine, is how local cuisines develop. From the gardens of cooks who can't bear to waste anything they have put so much time and effort into.

Well, after Lemonade Experiment No 1, a chance word with Rosy's teacher revealed that the Grade Six class were going to be responsible for the Lemonade Stand at the school fair.

'If only I knew someone who knows how to make lemonade.' sighed her teacher. Well....

A week later I was making lemon cordial with twenty-four twelve year olds in their classroom. You have never seen such enthusiasm, such a lot of lemon juice, such a lot of sticky..

The children had brought along bags and bags of lemons from backyard trees, plus lemon squeezers. One of the other mums provided twenty screw-cap wine bottles (she will remain nameless..). One teacher, three mums, the gas cook top from the classroom next door. Five children cut lemons, fifteen squeezed and strained, right at their desks, and four helped to measure and stir and cook the lemonade on the bench next to the sink. We ended up quadrupling the recipe, using six litres of lemon juice, and making sixteen litres of lemon cordial concentrate, which later made up about eighty litres of lemonade with water and soda water. They sold out at the fair.

This was such a fun, if exhausting experience. It shows how simple it is, really, to bring sensible, practical knowledge into the classroom. I was astounded that this all happened in a regular classroom with only a sink and a portable gas cooktop as equipment. And how quickly knowledge can be passed along. One week I read a recipe on the internet, the next day I had a new skill, the week after that twenty four children and four other adults also had a new skill, and something good to do with all those lemons! 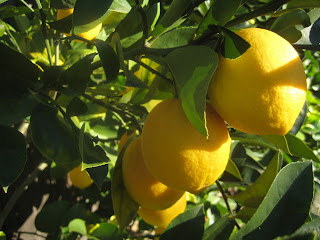 It is, of course, one thing to plant a lemon tree, but if you don't know how to use lemons, they will get put in the compost. I heard so many stories from the kids about how their neighbour/granny/cousin's hairdresser were so pleased to get rid of the lemons from their backyard trees. I so often talk to people who feel that their fruit trees are liabilities, quite decorative, but then they drop all this annoying fruit on the ground...

My mission is to rescue all this unloved fruit, and find ways to use it. How wonderful if I could manage not to buy fruit, but visit the backyards of all my friends through the year, and turn their garden trash into my pantry treasure. Or even just share recipes. At least one of the other parent-help mums from our lemonade day went off with the recipe to go and make lemon cordial from her own lemon tree. More lemons saved from the compost.

Tanya Murray said…
FANTASTIC! Good for you and GREAT for the kids. They will remember that their whole life and take it with them into the future. Can you believe I still have a basket of lemons hanging around my bench. I had better get to and juice them pronto.
Tuesday, 27 November, 2012

Jo said…
Hi Tanya, yes, it was just a lovely day, and I was so thrilled to see such enthusiasm from a bunch of twelve year olds. Two boys even stayed behind at recess to continue cooking the last batch of cordial.

Tanya Murray said…
On blogger, click on your blog's name at the top (probably written in orange) that will take you to "Overview". On the left hand side under the box that says "new post" look down the list till you find layout. click on that. Now you should see the bones of how you can layout and create different aspects of your blog (like you probably did for your profile blurb) Click on add a gadget and scroll through the list that pops up to find "followers" and click on that to add. It will ad it to your sidebar and you can click and drag it to anywhere you want. There are also other options for following in this same add a gadget like; subscribe via email, google+ etc.
Hope this helps, Cheers, Tanya
Thursday, 29 November, 2012

e / dig in hobart said…
ENVY! supreme envy. i wish i had so many lemons i was giving them away. i have a poor tree (was here when i moved in) that produces tiny and horrid tasting lemons. afetr seven years i've had enough and i am going to buy another tree. what variety do you recommend for tassie?
and thank you for the link to another tassie blog - i am always keen to 'check out' locals and have a conversation.
Thursday, 29 November, 2012

Jo said…
Tanya, THANKYOU for those lovely clear directions. Whenever I go into the blogger dashboard, I kind of panic and leave again. I should really get my clever children onto it.

e, I have the 3 common lemon varities, Eureka, Lisbon and Meyer, also a dwarf Meyer in pots marketed as Lotsa Lemons, true to its name. This combination gives me lemons all year round, bar about 6 weeks. The Eureka and Lisbon are bigger trees with giant fruit, the Meyer more compact with sweeter fruit and thinner skin, more like 'bought' lemons, but you can't leave them on the tree as long without them starting to go bad, ie only a matter of 3 weeks to a month, compared to two or three months with the bigger lemon trees. All of them need to be a bit protected from cold winds, but I do nothing to mine other than feed and keep the bases clear from weeds and grass. love those lemons! And love Tanya's blog. Am learning so much from her!
Saturday, 01 December, 2012

GretchenJoanna said…
I love you for your love of lemons. I myself had as many lemons as I wanted, free, for 40 or more years, and then Poof! Those were no more, and I have to buy them at the store now. I'll never get over the shock. More than ever lemons are like gold to me, but I don't use them joyfully and generously as I used to, and my hoarding leads to shameful waste.
Tuesday, 04 December, 2012

Left-Handed Housewife said…
I love lemons so much--the way they look, the way they smell, the way they taste with a little sugar mixed in. I just read a recipe today that called for preserved lemons, which supposedly you can buy at the grocery store. I'm going to hunt some down ... or find a recipe.

Sometimes I buy lemons when they're on sale, just to have them around.

Jo said…
I would just die if I had to buy a lemon now! I really do appreciate them. Frances, I find preserved lemons very salty, but do let me know if you have a good recipe for them, because I know where there is a lemon tree...
Tuesday, 11 December, 2012

GretchenJoanna said…
I had for a long time been wanting to try preserving lemons in the North African way, and then I had some in a restaurant, and didn't like them. I was disappointed in myself, and sad that there was a form of lemon I couldn't enjoy. But then I remembered hearing about missionaries to some North African country where the national drink was coffee with rancid butter in it. The missionaries eventually grew to like that drink, but hey, rancid fat is not even good for us! Somehow the lemons and coffee are related, but this comment has gone on too long.
Wednesday, 12 December, 2012

Jo said…
Dear Gretchen Joanna, never truncate your comments on my account, I love every wayward thought! I take your point, but I think I would rather eat more lemon butter and drink more lemonade, than force myself to like preserved lemons.. but do let me know if you manage it! Oh, and also if you develop a taste for rancid butter..
Thursday, 13 December, 2012

Anonymous said…
I CANNOT WAIT to have lemons from my tree. How wonderful that you got all those kids making lemonade. That is one dying art that has now been passed on to the next generation thanks to you.
Thursday, 13 December, 2012