And Now, the Dishes.. 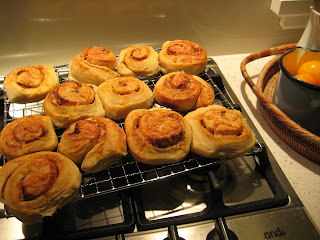 So today I decided to get my head around the concept of filling up that oven and socking it to the power company. Turns out, getting my head around it is the easy part. The tricky part is two days of planning and shopping, and four hours of standing in the kitchen, surrounded by every appliance I own, and straining the capacity of the dishwasher to the limit. Still, there are a lot of worse places to be on a cold and rainy Tuesday afternoon, than inside, cosy in the kitchen, the children at the table doing their homework with only the minimum of bickering. I started off the bake-a-thon with cheese and vegemite scrolls for school lunches. 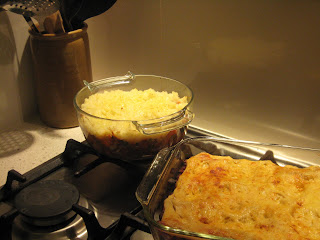 While I waited for the dough to rise I made a giant pot of bolognese sauce for the lasagne. Yesterday I picked a heap of tomatoes, and all the basil. First frost of the season last night, so the food processor worked overtime processing the tomatoes and some of the basil for the sauce. The rest of the basil I whizzed up with a little oil, then froze it in ziploc bags for winter pasta sauces. At this point I am thinking I may have overscheduled just a teeny tiny bit. There is no bench space and the walls are splattered with tomato sauce. Thankfully The Girl came home and like a Domestic Angel, whipped up the bechamel sauce for the lasagne while I made the scrolls and chopped all the veg left at the bottom of the fridge to be steamed for cottage pie. The little girls now started fighting over who would grate the cheese (and eat it). I slapped the lasagne together, saved some cheese to top it. Scrolls out of the oven, dinner in. I turned the left over bolognese sauce into cottage pie by throwing in the steamed veg, and adding lots of Worcestershire sauce, topping it with left over mashed potato from the weekend. That's another dinner in the oven, in those fab Pyrex dishes we got for our wedding 21 years ago. They just keep on keeping on. 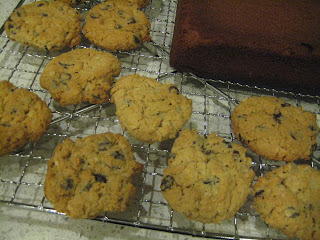 So The Girl gets into the vibe of the afternoon and decides to whip up a chocolate cake and choc chip cookies to stuff lunchboxes all week. She really is a star. We ate half the lasagne for dinner and wrapped up everything else to freeze for later. Yesterday I made a crockpot of chili, full to the brim, three times the normal recipe, so now I have five family dinners, three individual lunches, a dozen cheese scones and half a dozen scrolls in the freezer. I feel like I may never cook again. This, of course, is what we were left with after dinner. 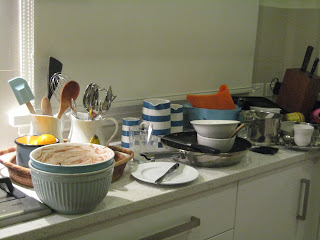 This is the second shift of dishes. We filled up the dishwasher three times today, but I won't have to cook for the rest of the week, so maybe we can squeak by with one load a day, which is half our normal use. I shouldn't have to turn on the oven again for the week either, which I must say is a relief. We can heat up dinners in our remarkable tiny convection microwave while I recline on the couch reading trashy novels.

And tonight at bedtime I started reading Little House in the Big Woods to Posy, the first chapter where it is Autumn and Ma and Pa are butchering the pig, and hunting and digging up veg, and filling the house with food for the Winter, and I am right there with them, house stuffed to the rafters with good food, and just very, very grateful I didn't have to kill a pig this afternoon as well...﻿