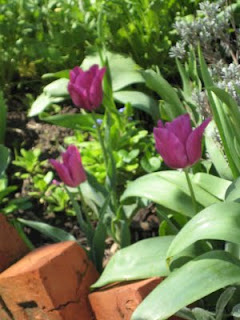 Ten years ago when we moved into this house I was four months pregnant with Rosy. I immediately began to dig up the entire front lawn and put in garden beds instead. I have this unfortunate condition that when I am pregnant I think I am Superwoman, and get over-optimistic ideas about what I can achieve with a new baby. The Man thought I was mad, but I was on a mission. I had a Mr Plumbean moment (My house is me and I am it, my house is where I like to be, and it looks like all my dreams), and planted birches, fruit trees, currant bushes, and a rhubarb patch. Mr Plumbean went out and bought an alligator, but I thought that Neighboorhood Watch might have something to say about that, so I merely went out and pinched plants from all my friends, and threw packets of flower seeds around.
Of course, the inevitable happened. Two babies, one on-line business and ten years of homeschooling later, the garden was a fine example of The Cottage-Style Neglected Look. The trees had all flourished, as had the roses and lavenders grown from cuttings In fact the roses were forming their own Sleeping Beauty Castle Hedge along the fence, good for repelling burglars. The love-in-a-mist and forget-me-nots were putting up a brave fight each spring against the encroaching weed tide, nobly abetted by the kiss-me-quick (I never noticed before what Freudian psychoses my choice of flowers hint at...). Last year I felt I really had to do something, so a gardening friend made lovely paths out of the old red chimney bricks we pulled out of the kitchen, and we mulched everything with seaweed on top of cardboard, which took care of most of the weeds. During the Winter I cut off all the rose bushes level with the top of the picket fence so that pedestrians may once again use the footpath.
This year I have decided, in keeping with my general theme, to declutter the garden beds. Instead of self-sown beauties coming up wherever they please, I have weeded and transplanted so that I now have clumps of plants in the style of the English herbaceous border. It is a very cheap, if labour intensive way to renovate the garden. In a few weeks, when Spring proper arrives, I am hoping to see The Cottage Style, Slightly Optimistic of Rescue Look emerging. In the meantime, I will enjoy the tulips, which I mean to move every year, but haven't yet.
Labels: garden

gemma @ loz and dinny said…
Ah - I always get to this time of year and wish that I had sewn heaps more seeds so Our garden beds didn't look so bare ... so then I gaze out every morning waiting for the things I have put in to DO SOMETHING! Thanks for swinging by my blog with your comment - if you ever wanted to test the allergy - Brown Owls is very cruisy!
Thursday, 24 September, 2009

Jo said…
Hey, Gemma, I might get brave and come and look really silly, mending socks among all you craft queens! Thanks for the encouragement! And Child of the New Forest, I just love my garden. It brings me such joy - and spring - you just can't go past it for ditzy garden happiness!
Monday, 05 October, 2009