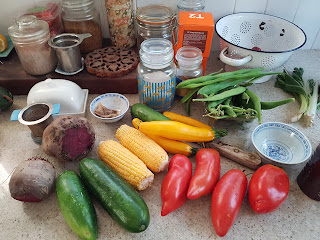 It is the season when everyone's vegies ripen all at once, and when anyone offers I say "Yes, please!" so I have been the lucky recipient of many vegies. There was also a free box of apples outside a house along my dog walk, so I collected a bag of them as well and made them into apple cakes.

Most of the veg above I turned into minestrone, and I popped the cucumbers into a jar of pickle juice I had been saving. My own cucumber harvest was pitiful, but I knew someone would be off-loading some cukes eventually. Have you ever re-used pickle juice? When you finish the jar of pickles from the supermarket you cut up a fresh cucumber, warm up the pickle juice in a small saucepan, pop the sliced cuke in and bring to a simmer for five to ten minutes (very approximate, it doesn't really matter). Then cool it all down, pour it back into the pickle jar and pop it back in the fridge for the next week's sandwiches. I don't know if there's a limit to the number of times you can do this. I do it two or three times and then tip out the old pickle juice. Does anyone know if there's any health and safety reason for not re-using the pickle juice until it runs out?

Here is my minestrone with donated silverbeet, tomatoes, zucchini, potato and a left over turnip that I found in the bottom of the fridge. There is half a packet of maccaroni that has been sitting in my pasta bin for months, and a tin of white beans for protein. It was very yum. 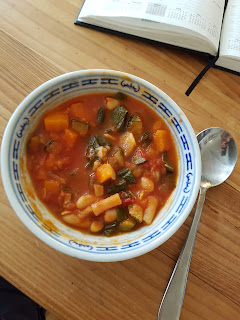 The tomatoes in the top photo are from a friend who very naughtily smuggled the seeds into the country from France about fifteen years ago. He had saved the seeds from tomatoes he ate there, and he was there for his sister Ruby's wedding, so they call these tomatoes "Ruby's Wedding Tomatoes". They were very delicious, so I also saved the seeds. Tomato seed saving involves a bit of faffing about. First I pulled out the pulp with the seeds in, and soaked it for a few days in a jar, then I tipped the whole mess into a sieve and rubbed the pulp through until just the seeds were left. Then I rinsed the seeds and spread them on some paper towel for a couple of days until they were dry. They are now stuck to the paper towel, which is excellent as now I can write on the paper towel what seeds they are, and the year, then fold the whole thing up in an envelope and store until spring. In other news, Paul has covid. He brought it back from his work trip to Victoria, but is not particularly ill, thank goodness. Last April 13 Paul was in surgery having his tumour removed, and this April 13 he was in quarantine. We are hoping that next April 13 we might be doing something fun, like having a picnic.. he gets out of quarantine on Wednesday.

Tell me what green and thrifty projects you have been up to. I love to read all your stories:)

Anonymous said…
The minestrone soup looks delicious! Isn't it wonderful to receive veggies from others? Soon it will be mango and avocado season here in South Florida, and I am hoping to receive some from different neighbors. Both my trees are non producing at this time. My tomato and pepper plants are doing well and I am hoping for a good crop.
I save and re-use all the juice left over in any of the pickle jars( mainly from pickled jalapeños).I use it in my cooking. I add to the water when making beans, or in taco meat for a special zing.
I received a batch of left over skeins of yarn from a friend, which I am making into a scarf to send to a family member who experienced winter for the first time this year (moved from tropical Venezuela to Atlanta Georgia in the United States) and is slowly thawing out.
Next week, I will travel to visit my grandson, neither thrifty or green but Oh, so good for my spirit.
Glad Paul's COVID has been a mild case. It is always good to hear of your life.
Be well, my friend.
Patricia

Deborah said…
Hello!
Sorry to read that Paul has had CV-19 and hope you stay well.

Love a bit of thrifty myself! I have propagated eight new lucky bamboo plants, four pelagonias, two box to thicken up a hedge and some spearmint lavender. Striking your own plants is very satisfying. My mother, who is in her 90s, grew up before there were garden centres and remembers she and her sister being told to gather around their mother while she snapped off a piece of a plant she fancied. This was a common event at the zoo and botanical gardens, apparently.

Your minestrone sounds very good. It is finally cooling down in Western Australia so soup will soon be on the menu.

Hope you had a lovely Easter surrounded by family.
Deborahx

Mary said…
Your soup looks very yummy! I haven't tried the pickle juice trick, but when cucumbers come in this summer I'll give it a go. In fact, I am just planting cucumber and squash seeds in my veggie patch today, so it may be a while. Right now I'm only harvesting kale, lettuce, herbs and the last of the spring onions. In a few days I'll have some strawberries, if the birds don't beat me to them!

Treaders said…
I've always wanted to have a go at canning/pickling (although I'm not sure what pickling spice is here) but have always been too wary (in case I poison anyone), but I never thought to reuse the pickle water! Duh! Thanks for that tip. And I think those tomatoes are called tomate andine cornue, but are commonly called tomate allongée (long tomatoes). I love them too and plant those and Italian roma tomatoes every year. I like the idea of saving the seeds the way you do too (to hell with Monsanto)! And I'm glad Paul's not suffering too badly with covid! What a year he's had!
Monday, 18 April, 2022

56steps said…
I always enjoy your thrifty posts and enjoyed seeing a new one. In fact, I like to scroll back and reread some of your old ones - I've always enjoyed hearing of someone's efforts at living a full life using the things around us. Not always just throwing money at it for a quick fix.

Your soup looks delicious and I enjoyed your tomato story. And reading the comments I also laughed at Deborah's story of her grandmother telling the kids to gather round while she snipped off a piece of something she liked out at a public place.

Hoping Paul gets through Covid quickly and stays well and strong.

Jo said…
Patricia, what a good idea for the pickle juice. I'm cooking up beans today and will add a dollop to see how that turns out. Enjoy grandson time:)
Deborah, I love your enterprising grandmother:) I have been known to dig up seedlings from a park with a teaspoon while on a picnic (it's all right, they were self-sown and there were hundreds. I don't dig up the bedding plants..) I also take cuttings when out walking the dog, especially from verge plantings.. I call it helpful pruning. I must remember to take secateurs and a number of children next time I go to the botanic gardens..
Mary, it's impressive that you still have something in your garden through the 'hungry gap' of spring.
Anna, you are so right, that is exactly the tomato, thank you for the identification. I have passed on your id to my friends. Now Ruby's Wedding Tomato has another name:) It's such a yummy tomato with lots of pulp, so good for cooking. I have the seeds stashed away for the spring. Re pickle spices - you can use any you like. I use black and yellow mustard seeds, peppercorns and sprigs of dill if I have any on hand.
Debra, I love reading all your stories as well, and get such good advice from you all:)

sustainablemum said…
Anything made with donated free veg always tastes delicious, your minestrone looks yummy. I had some kale plants a couple of years back which I let go to seed, last year they had spread their seed all over one of my beds and I had free kale plants which are still going strong.

I have not used store bought pickle juice for making pickles but have done it with my own juice before. We have a garage and workshop full of bits waiting to be reused/thrifted. We would always try to make our own out of something rather than buy new. My daughter needed a stand to display some crafting bits she was selling to fund-raise. She made one with her dad using bits of wood he had and some old lolly sticks that we always keep hold of once they have been eaten. They make good plant labels too. I never buy rubber bands as I keep all of them in a pot. I am sure there are many other things we have thrifted just cannot think of anything else right now!
Wednesday, 20 April, 2022

Jo said…
Sustainablemum, oh yes, the free factor adds extra tastiness:)
I love that your philosophy is to make your own and that you have a garage devoted to making that happen. It is so lovely that your children have two parents who consistently model thrifty creativity and are willing to teach and help the kiddos to gain new skills. That is some epic parenting right there:)
Sunday, 24 April, 2022

Anonymous said…
Soup looks amazing. Love the pickle juice idea! Any other fruit or vegetables you seed save? I’ve just started seed saving… also would love a post about any DIY home cleaning products you might be using?
Saturday, 30 April, 2022

Jo said…
Anon, I save all the seeds! Most are super easy - peas and beans etc, you just let them dry on the vine, then de-pod and store them. Most greens throw up beautiful flower spikes then pods of seeds. Again, wait until they dry on the plant, then pod and store them. Sweet corn, wait for the cob to dry on the plant, then store it whole, or pull the dried kernels off the cob. This week I harvested a single butternut pumpkin from my garden, it was perfect, so I saved its seed by scooping out the seeds, rinsing the pumpkin pulp off in a sieve and drying the seeds on paper towel. The only seed I don't save is broccoli and cauliflower because it crosses with all the other brassicas in the garden, and you never quite know what you are going to get! There are lots of good books out there, or google how to save each seed if you are unsure. Or ask me here, and I'll tell you what I do, and hopefully the others in this knowledgeable community will chime in:)
And yes, I do make some homemade cleaning products, I'll put a link in my next post.
Tuesday, 03 May, 2022