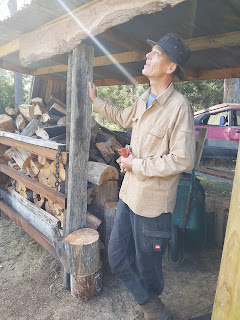 I took this photo of Paul on Monday. Clearly he is communing with the angels. As far as I can tell he is advising them that if they raise their aerial by thirty feet or so they will get much better transmission in the UHF range. Or maybe it is the VHF range. I'm not sure, and neither are the angels, but Paul is explaining it to them in detail. If you did not know that angels are amateur radio enthusiasts, well, neither did they, but Paul is getting them up to speed.
The last few days have been an amazing kind of pause in normal life. Early on Tuesday morning I walked with Paul down the hill to the hospital where I sat with him and held his hand until he was all gowned up and wheeled away to theatre. That was a difficult moment, and the beginning of a journey which is far from over, but we have weathered the first storm.
I spent the day with Paul's mum in her studio and we made some ceramic bowls. It was so good to spend the day in company with Paul's lovely mum and her partner - I discovered when I got home to a quiet, empty house that waiting by myself was nerve-wracking. Then I called up my dear friend Monique and she came over with sushi and we drank gin. I don't usually ask for help like that, but I am learning how. It is quite easy once you start:) 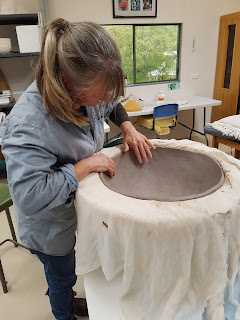 Then came the call from the surgeon ten hours after Paul was wheeled away to say that he had come out of the surgery very well, with the best possible outcome, keeping both most of his pancreas and his spleen, which means he gets to continue making his own insulin, and also keeps up the immune functions that his spleen provides. Did you know your spleen provides immune support? I had no idea.
Wednesday I went to visit Paul in the Intensive Care Unit. I have never been in one before, and had always imagined it as being a rather hushed, sombre place with critically ill patients lying in darkened rooms, but actually it is more like a continual circus of hordes of people processing in and out of the rooms, nurses, doctors, surgeons, physiotherapists, you name it, they're popping by. One of my friends is a pharmacist on the ICU ward and had told me Paul was on her list, so I got to chat with her, and the husband of another friend was his pain management doctor on the first morning. Launceston is like that. Everyone knows everyone.
Paul was hooked up to every machine that goes ping and had half a dozen tubes draining out of him and several more going into him for IV drips and pain management. I had never imagined so much of the body's function could be outsourced. Nurses are amazing. I am fairly certain they have superpowers.
He was very groggy from the pain medication but still essentially Paul. I find it extraordinary that one day you can be in surgery for ten hours and the next day hold a conversation. He became the wonder of the ICU unit when he insisted on going for a walk with a walker on that first morning, with the nurse trailing behind with the pole with all his drips and drain bags dangling from it. Apparently ICU patients do not generally go for walks. Hence last night they threw him out of ICU and onto the surgical ward where he is now. I walked in this afternoon to see him and bumped into one of The Boy's best buddies from school. She is a nurse now, and told me how well Paul was doing, and how amazed everyone is by his quick recovery. I don't think they get many very fit and healthy patients in with the Whipple procedure, and it seems that your general level of fitness makes a huge difference to post-surgery recovery.
Still, despite his progress, there is still a lot of discomfort for my poor darling, and he does tend to drift off halfway through sentences - only to be expected, of course, but it seems amazing that within a week he will be able to go home. He still can't eat or drink, he's still on oxygen and can hardly do more than bend forward slightly by himself. To think that next week he will be walking out of hospital seems impossible. However, for Paul, nothing is impossible. He is Determined.
Also, angels. As we have seen, Paul is solid with the angels. They commune.

Treaders said…
I reckoned his fitness was going to play a big part in his recovery. I guess it says a lot about his way of life! I'm so happy for him (and for you, of course). Onwards and upwards Paul!
Friday, 16 April, 2021

Kathy said…
Worrying having a 10 hour surgery....glad he is doing better than expected and with these things all you can do is take one day at a time however it all sounds like a very good outcome. Have a good week.
Friday, 16 April, 2021

Anonymous said…
Ten hours is a surgical marathon! Paul obviously has great reserves of strength and determination to call on, and as long as there is an element of patience as well, he's going to do just fine in his recovery. What a brilliant way for you and Paul's mum to spend a super-stressful day. Working with clay is soothing and satisfying, especially when you have expert guidance - and you will have something lovely to keep from what has otherwise been a tough time.
Cheering you both on -
Linda in NZ
Friday, 16 April, 2021

Jo said…
Anna, yes, except for the cancer, Paul is very fit and healthy! It is a bit of a reminder that even in the worst health situations there is a lot we can do to mitigate outcomes.

Kathy, yes, I am an impatient person, and one day at a time is a difficult lesson to learn. But i don't really have a choice.. Paul is much more accepting of what is..

Linda, yes, he does have a lot of inner strength, as well as health, certainly determination, and also a lot of patience. I think he will do well. And yes, i have never worked with clay before.. It has some of the same grounding properties as gardening - not surprising as both of them involve working directly with the earth.
Friday, 16 April, 2021

gretchenjoanna said…
That's a happy update!! What amazing medicine, the procedures and the technology, and of course, the caring humans.
Friday, 16 April, 2021

wonderful to hear that surgery has gone so well :-) One of my teachers had a very interesting take on cancer. He said that it is actually the body's way of saving our life. When the body cannot deal with the toxins circulating, it rounds them up in cysts and tumours to keep the toxins out of the blood stream. So the successful removal of a tumour is a great hurrah moment and now the body has a chance to rebuild itself and become healthy again.

I will email you soon re healing foods.

Anonymous said…
So glad for the good report, and for Paul's continued improvement. Nurses do have superpowers, and are physical manifestation of angels.
Communing with angels. I love that. I will add that having a loving partner by his side is doing wonders for Paul's healing.
Thank you for keeping us updated. Much love to you both.
Patricia
Friday, 16 April, 2021

Penelope P. said…
Such brilliant news. I so pleased Paul is making such a good recovery. Don’t forget that you’ve got to recover from it all too, so treat yourself very gently. Have a happier weekend, and all love and positive vibes to you and Paul . Pennyxx
Friday, 16 April, 2021

Jo said…
Gretchen Joanna, the whole process has been extraordinary and amazing! And none of the machines would be worth anything without the dedicated people who use them. we really are very fortunate to have access to excellent health care.

Madeleine, I really like that perspective! Thank you! And I am looking forward to getting some very nutritious and healing foods into Paul when they let him out of hospital:)

Patricia, I have never had very much to do with hospitals, but I can say that the nursing staff have been wonderful. What they do, day after day - they really, really do need to be paid more!

Penny, I am kind of treating myself a bit gently here and there, but necessity gets in the way. Over the last two days I have stacked 4 metres of wood, which has tired me out considerably, but physical work is also very good for grounding and giving the little worries a chance to flitter away:) Thank you for all your good wishes and happy thoughts:)

Mary said…
Such excellent news about Paul's start in recovery and the wonderful healthcare people helping him! Take good care of each other and yourselves. Best wishes from half way around the world and another hemisphere.
Monday, 19 April, 2021

Jo said…
Mary, i just got your good wishes from halfway around the world and in another hemisphere! Thank you! I think they may have been held up by Australia Post. It happens.. things going really well here..