A couple of weeks ago I stood up after lunch one day and pulled a muscle in my leg. How does that even happen? It's not like standing up is an extreme sport or anything. Ok, some days standing up feels like an extreme sport, but we all know it really isn't. Anyway, I took it as an omen that that universe wanted me to lie on the couch for several days. The dog agreed with me.

Two days into my new couch-based life there was a tap on the window at lunchtime, and it was The Girl! Come all the way from Melbourne! Most states in Australia have been in some kind of lockdown since March, and here in Tasmania interstate travel has been effectively banned without a two-week hotel quarantine. The ban for travel from Victoria lifted at the end of November, and The Girl had sneakily and with great cunning sneaked up on us to surprise us.

I shrieked like a train whistle and hobbled shrieking through the kitchen where Red demanded to know what I'd done to myself this time. "Front door!" I shrieked incoherently (so much shrieking), while waving violently and hobbling to wrestle the door open. I completely lose my head and the power of speech in every crisis so it's lucky I don't have many of them. After that there was lots of hugging and tears, and after we had recovered we drove to the cafe Rosy works at and there were more shrieks and hugging and also lunch.

The Girl succeeded once more in blindsiding us with her general amazingness and clearly knew just how much we had needed to see her. We had a wonderful four days - Red and Rosy had their big sister back and I had lots of time with my beautiful girl. The universe even conspired with us when she left and delayed her plane so we got an extra hour together in the airport cafe. 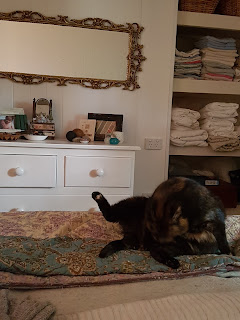 And a photo of the cat so she won't get jealous.

It is marvellous to have grown up children who are busy working their own lives out, but who still want to be part of my life as well. They all bring so much joy to my daily life, and they push me and challenge me and keep me honest, with them, and with myself. Has anyone noticed how this generation of young people seems so wise? They think a lot. They are realists. They see very clearly. My lot seem so much more grown up than I was at their age, despite the fact I was a parent when I was younger than my oldest two are now. I am very optimistic about the future when I think of how my kids are turning out.

Anonymous said…
Delightful post, Jo! I experienced the joy of seeing The Girl with you!
I dream in anticipation of hugging my oldest, and my grandson "soon." "Soon" springs from hope, and keeps us going although it will be a year next week. I will shriek, hug, cry and laugh "soon," very "soon."
Be well, my friend.
Patricia/FL
Friday, 18 December, 2020

Anonymous said…
Woo! Being dramatic enough to make it onto the blog is all I wanted :) heheheheh
Love you guys a whole lot xx The Girl
Friday, 18 December, 2020

Treaders said…
Aahh how lovely. What a wonderful surprise she managed to spring on you!
Saturday, 19 December, 2020

Kathy said…
What a wonderful surprize to spend time with your daughter. It certainly has been a crazy year and now with the Sydney Northern Beaches Cluster things could change a bit too. Hope your leg is on the improve. Have a Merry Christmas and a Happy New Year.
Saturday, 19 December, 2020

Anna, it was the best! She is very, very sneaky. She sent a message to Red on her way from the airport to ask what we were doing. Red sent a photo of the art project they are working on so The Girl knew we were home! Although, if we weren't home she planned to use the spare key to get in and have a cup of tea ready for us when we returned..

Kathy, yeah, surprises good and not so good.. keep yourselves safe and sound.
My leg is nearly better - it's taken a while. It's things like this which really remind me I'm not twenty five anymore, and just don't bounce back like I used to..
Saturday, 19 December, 2020

Deborah said…
Lovely surprise for you and your family. Sneaky is good, but just being there is good, too. We are also enjoying our son being here, maybe until the new year, depends on work.

WA opened the hard border the day the Sydney Northern Beaches Cluster was diagnosed so on tenterhooks for the time being, after feeling safe for so long.

So, a simple family focused Christmas for us. It has been a relief to not do the usual decorating, cooking and entertaining. Probably marks a change for all of us as we recognise what really matters.

Very best wishes to you and your family for Christmas and the New year. May it be healthy!

Jo said…
Deborah, yeah, here in Tas we have all been just a little bit more careful now that the borders are open. Although, not as vigilant as we might be - The Girl was a bit spooked, coming from Melbourne, that no-one here wears a mask and we walk way too close to each other, apparently!
Enjoy your time with your son - that is something we are all valuing right now isn't it? When we get together with family we are very, very grateful.
Saturday, 19 December, 2020

Anonymous said…
Oh, I have daughter envy! My girl (now way grown up) lives in WA and had to cancel a visit back in April. It's three years now since we saw her. What a delightful surprise for you all, and how clever of The Girl to get the timing just right.

It was so good to see this post from you. I missed this little community!

Jo said…
Linda, turns out I have missed you all as well, so here I am:)
Three years - that is a heart-achingly long time. That first hug is going to be such a good one. Here's to 2021 being that year for you xx
Monday, 21 December, 2020

gretchenjoanna said…
This makes me so happy.
Monday, 21 December, 2020

Anonymous said…
Every time I try to write a comment for this I tear-up; first because you had such a sweet surprise, and second because I'm so envious - I haven't seen my daughter and granddaughter since last Christmas, when the little one was 7 months old. Thank heavens for Skype so we're able to have long video visits regularly. Hope y'all have a Merry Christmas! Be of Good Cheer!
Mary H
Georgia, USA
Wednesday, 23 December, 2020

Jo said…
Mary, ah, it's very hard, and babies change so fast - you want to be with them and squish their chubby legs and smell their hair. I am sure you are holding onto the hope for soon. Much good cheer to you as well:)
Wednesday, 23 December, 2020