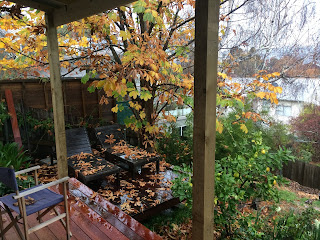 This morning I walked in the pouring rain to the gym and then to get milk. I imagine that some of the drivers of the cars that whizzed by me felt rather sorry for me, because who wouldn't prefer to whiz around from A to B in a comfy recliner chair in an air-conditioned pod to walking in the rain? Well, me, increasingly. I am rediscovering the joy of being out in all weathers. Being outside and gardening several days a week has reconnected me with weather. Sunshine, rain, cold, hot. As long as you are dressed for it, weather is mostly wonderful. I think maybe we have conditioned ourselves to be afraid of the outdoors because weather and bugs and general unpredictability. But this morning I was snugged up in my raincoat with my big old golf umbrella and having a marvellous time in the rain.

Right now I am sitting on my new back verandah watching the rain cascade down off the roof, which is strangely mesmerising. I don't have a door between the verandah and the house yet, so I had to climb out of the window, but that adds to the excitement of using the verandah. Will I fall out of the window onto my head? No? Well, that's good then.

Yesterday I spent several hours digging giant weeds out of the garden, and then I continued with my project of sourcing alternative (free) mulch to cover it up for winter. For this I wandered up and down the streets around my house with my large plastic recycling bin, filling it up with autumn leaves and hauling it back home again. I decided to do community service at the same time and cleared out huge piles of leaves from storm gutters and off steep steps that get very slippery in the rain with all the leaves. One of my friends found me clearing leaves off a set of steps as he was heading back to his car from his job at the hospital. "Ah, dear," he said, "It's come to this has it? Sweeping the streets for a living now?" Posy thinks I am turning into an eccentric old lady, and shakes her head sadly at me whenever she sees me. To be honest, this is the kind of thing that I would never have done in the past, because, what will the neighbours think? In fact, my dear old neighbour was rather non-plussed, but soon came round to the idea, especially as I was sweeping the leaves out of the gutter in front of her place at the time. Because, truly, no-one really cares what other people do, so worrying about what other people think is probably pointless, and though initially concerning, becomes easier with practice. Well, mostly. There are still moments when I think I really am becoming a bit eccentric. But then I just have to shrug and push on, because what is the alternative? Living the life of a scared little rabbit and never doing what you want. Because of what people might think? Enough of that. Also, the leaves on the garden beds look wonderful, and will compost down over the winter into lovely rich black soil for spring veg.

So here is to a day of enjoying the weather, whatever it is, and undertaking whatever eccentric enterprise takes your fancy.

simplelife said…
If I saw you cleaning up the leaves I'd probably think, look at that brave woman, wish I wasn't too scared to pick up the leaves for my garden. I'm definitely in the scared little bunny camp, but at the same time I know most people are too busy worrying what everyone else is thinking of them to be concerned about what I am doing.
I enjoy walking in the rain, once my feet get wet it really doesn't matter after that. I dislike the wind, a lot!
Your verandah looks very comfy and a great place to watch the rain.

Jo said…
Kate, I have so often been the scared bunny. But.. why? Why give other people imaginary power? It's crazy. So, no more of that. I don't know if merely putting my foot down will resolve that issue, but I will keep you posted:)

Patricia, oh, yes, it makes life so much more colourful. I have always loved it in other people, so feel a responsibility to take up the torch!
Tuesday, 29 May, 2018

Grow Gather Enjoy said…
Hey Jo, I completely agree on the disconnection with the weather stuff. I remember when I was living in london for a brief stint someone once saying 'there's no such thing as bad weather, just bad clothing choices' - which I've always remembered. I too am a crazy eccentric lady collecting autumn leaves along the street (I did have to give myself a pep talk along the lines of 'no-one cares what you do'!). Fear will always be there we just have to choose to act on our values/convictions anyway.
Cheers,
Laura

Beznarf27 said…
I seriously LOVE this post <3 Collecting leaves and using natures bounty to make your garden even more beautiful than it already is and feeding it at the same time is the ideal that we should all be working towards. Have we, as a society, come SO far away/in the wrong direction from our origins that we don't even recognise natures natural cycles and that part that we should be playing in celebrating them? I was out walking Earl at 5am this morning. I do this because there is hardly any traffic, Earl can walk in the middle of the road like he seems to want to do without us both being squashed flat and because it is stunningly beautiful out there in the still, cold, moonlit morning. This morning was particularly beautiful because the moon is full. I would be missing all of this glorious beauty if I didn't have to walk Earl. Keeping in tune with nature isn't a chore, it's a blessing and it takes a brave person to recognise that. No more bunnies for either of us (even though I was born in the Chinese year of the rabbit ;) )! Here's to brave adventuring with natures bounty and bollocks to anyone who judges you! Your garden is a credit to you. It's lovely :)
Wednesday, 30 May, 2018

simplelife said…
good point Jo, the giving away of our power, food for thought.

Lisa said…
I find your blog so inspirational, thank you! I'm becoming rather jealous of your slowed down, paired back life and it's giving me the motivation to work hard to find the simple things that I enjoy in life, like sitting outside watching nature etc and just not buying crap we don't really need.
Thank you :)
Wednesday, 30 May, 2018

Anonymous said…
I'm with you and Patricia - eccentricity is greatly undervalued, in my opinion. You're doing great community service and adding character to your neighbourhood! If we lived near to the coast, I'd be the old lady dragging sacks of cast-up seaweed back to the garden.

You are going to love that verandah all year round.
Linda in NZ
Wednesday, 30 May, 2018

Meg said…
Oh, I love the rain! I love gardening when the rain is lightly falling. With my old gardening clobber on, gumboots and my "all-weather" hat, the soil moist and easy to dig ... fantastic! Meg
Wednesday, 30 May, 2018

Jo said…
Laura Jean, I am glad I have company in my autumn leaf collecting habit! Really, they are so brilliant for the garden it is a crime not to collect them. I do agree with the good clothing choices comment.. this year I bought a pair of Blundstone boots for the first time, to use for gardening. They are seriously the most comfortable, warm and supportive shoes I have ever owned, and winter will be a dream in the garden with my comfy boots. It makes me think, what else am I missing with proper clothes for the weather?

Fran, I am in awe of your morning routine. Me and getting up early are not friends, however I believe you that when you are out in the morning/dark it is brilliant. This morning I got up at dark o'clock to let the cat out and just stood for a minute to admire the moon before I scurried back inside out of the frosty dawn. I love your comment that "keeping in tune with nature isn't a chore, it's a blessing." Yes, and once I am out in it, I love it, but honestly, it is still quite difficult to haul myself outside some days. As you say, though, dogs are brilliant for that!

Kate, I like the way you phrased that, "giving away our power" yes, that is exactly what we are doing, so many of us let other people take it away.

Lisa, I am so pleased to read that. It is a continuing journey that I am finding most rewarding and entertaining. I think we all do so many things that we don't enjoy and aren't good for us, and it is not until we stop and question everything that we even realise what we are doing. I am still finding plenty of scope for further tinkering in my life! By the way, I loved reading a bit of your blog - you have had plenty of your own simple living experiments. i would love to see what you are up to now. Have you thought of starting it up again?

Linda, yes, the seaweed! I did that with Paul a few weeks ago, and would like to do it again. It adds all the good minerals to the soil.

Meg, yes, you can just feel the garden relaxing and sighing with pleasure in a light rain, can't you? I would like to see that all weather hat. It sounds extremely useful!