Requiem for a Good Cat 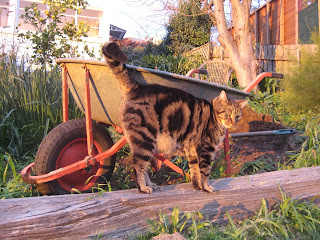 Milo the tiger striped tabby cat died last night. On Thursday he wasn't eating, and he stopped purring. Milo always, always purrs. Like a freight train. I got Posy to google 'My cat stopped purring.' Guess what, it means your cat isn't well. On Friday morning he still wasn't eating. I left for work and he was snuggled in his basket. I left the window open so he could go outside. That afternoon I was planning to call the vet. We didn't see him again. He didn't come home on Friday night. I called and called, but no little cat came meowing up the steps out of the dark for his dinner. Today at lunchtime my neighbour came over to tell me that they found Milo dead in their yard. I went over and there he was, all peaceful like he had just gone to sleep. He loves our neighbours and they love him. He adopted them as his other family, and I am glad he went over there to say goodbye.

Dear wee Milo. He came to us from the RSPCA as a tiny kitten, with his buddy Polly. A dairy farmer had brought him in - he had found the tiny kitten wandering across a paddock, with no other cats in sight. Milo was an adventurer from the first. He ranged far and wide from home. When we got a dog he was so annoyed he ran away for four days. The girls and I walked the streets, shaking his food and calling. On the fourth morning after he left I met some neighbours out walking, and as I told them how worried I was, Milo popped his head out of the ten foot high yew hedge above us and meowed that it was about time that I turned up with food.

He was not impressed about that dog though, and they had quite a number of seriously impressive fights, and the dog always came off worse for wear. One memorable chase around and around the Christmas tree ended with Benson the dog wound up in the Christmas lights while Milo escaped to safety and sniggered. Another time Milo left a claw in the dog's ear, with the dog looking like a rakish pirate with a cat-claw earring.

When we moved to our new house we had to keep the cats inside at night to stop Milo trekking back to our old house, which he did several times. Polly and Milo have slept on my bed ever since. Polly chooses all sorts of places to sleep - under the bed, on the ottoman, on any pile of clothes on the floor, on my feet - but Milo always slept in the crook behind my knees, purring away like a little engine. Last night when Milo didn't come home Polly jumped up on the bed and curled up behind my knees. Clearly she has taken over his role of comfort cat.

This evening the girls and I buried Milo in his ratty old basket that he liked to use to practise his scratching, when he wasn't sleeping in it on his blue blanky. We covered him with a blanket of flowers from the garden and Polly came to sniff her goodbyes. Milo was a good cat. He was a joyful adventurer and a happy soul. He loved sunshine and climbing trees and visiting the neighbours.

I will miss him helping me with the gardening. I will miss him gently patting me with his paws to wake me up in the morning. I am so sad that he won't feel the sun on his back and live his life under the blue sky any more. Life is so fleeting and precious. We come from the dark, and who knows where we go? Maybe he will come and visit me in the garden and in my dreams. Maybe he will remind me that what is important is the sun on your back and loving your neighbours.

Fernglade Farm said…
Vale little matey Milo. Alas we did not know you, but there was not a dry eye here after reading about your adventurous life and your passing.

Adieu Mr Milo! And best wishes for your next adventure.

Pam in Virginia said…
Oh, Jo - I am so sorry to hear about Milo's passing. What a gorgeous kitty! What a character! Thank you for sharing with us your life with him. If I am sure of anything, I am sure that we will be with our deceased loved ones again, no matter what shape or form they were. Love transcends all.

Anonymous said…
What a beautiful eulogy. Jo, we can feel the love and feel Milo's personality. Clearly Milo was an alpha cat.

fran7narf said…
I am so sorry Jo. I know that truly loved pets are welded into families more closely than some relatives. Please accept a long distance hug. I am sure that Milo will be somewhere close, at least in your thoughts and dreams.
Sunday, 02 April, 2017

simplelife said…
So sorry to read about Milos passing. You have written a beautiful and moving piece about. Thank you for sharing. Hugs Kate
Sunday, 02 April, 2017

simplelife said…
So sorry to read about Milos passing. You have written a beautiful and moving piece about. Thank you for sharing. Hugs Kate
Sunday, 02 April, 2017

Anonymous said…
Beautiful and moving Jo. My thoughts are with you. Specks.
Sunday, 02 April, 2017

Treaders said…
What a lovely tribute to Milo. And to be honest, there couldn't be a better way of going could there. I'm sorry for your loss. I'm not a "cat person" but my neighbours' cat would come round and just plonk himself on my lap when I was reading outside - total entitlement. And you know what, I might be becoming "a cat person". Anna
Sunday, 02 April, 2017

Anonymous said…
Sorry to hear about Milo. Sending love, as I know you must all be sad, and will miss himxxxPenny L
Monday, 03 April, 2017

Anonymous said…
Dear Jo
I am so sorry to hear of your sad loss. Milo sounds like he was a wonderful kitty.
May the Goddess guard him
May he find his way to the Summerlands
May his Sons and Daughters grow strong.

Thank you for telling his story.
Sending hugs to you and the girls and head schritches for Polly.

GretchenJoanna said…
I am sorry to hear about your loss of Milo! I wish that pets didn't have to be so short-lived - their presence is so important to us.

My granddaughter was just telling me that I should get a cat. She and I were sitting around her aunt's house, each with a cat on our lap. I haven't had a cat for several years... but she made me think more about the possibility... and to hope for its someday becoming reality. :-)
Monday, 03 April, 2017

Jo said…
Thank you everyone so much for your very kind words and loving thoughts. I miss my little stripey buddy very much.
Tuesday, 04 April, 2017

Deborah said…
Such a loving tribute to your cherished Milo. We develop such deep and special friendships with our animal friends and miss them keenly when they're gone. Loving thoughts to you and your family. Vale Milo. Deborahx
Tuesday, 04 April, 2017

Anonymous said…
I am sorry. Losing love from our families is hard. xx Kris
Wednesday, 05 April, 2017

Alison said…
I am sorry to hear about Milo.
Pets leave such a hole when they pass.
How old was he? He sounds like he had a good life!
I have lost a few pets from old age and accidents and I have always found it helpful to write down and remember some of the good times(and the funny and the sad) as a way to gather my thoughts and grief.
Thank you for sharing...I had a few tears along with you.
Sunday, 09 April, 2017

Hazel said…
I'm so sorry to hear about Milo. We have cats and dogs and they leave a huge hole when they leave. Thinking of you x
Friday, 14 April, 2017

Jo said…
Dear all, thanks again. I do very much appreciate your kindness and care xx
Saturday, 22 April, 2017