This week I have two new wood storage systems. Previously I had been storing all my logs and kindling in washing baskets, but this week my parents bequeathed me the family wood-box which was a wedding present to my great-grandparents circa 1912. It is actually hideously ugly, a very bizarre Edwardian contraption, a box with inlaid walnut decoration that covers a galvanised zinc coal hod, as far as I can work out. Anyway, I love it, despite its ugliness, and it is perfect to store kindling in. A friend passed on an old copper that was cluttering up her mother's garage, and now it is doing sterling service holding logs. So now my dining room is looking much more elegant, and really, those wicker washing baskets left a terrible mess on the floor as bits of wood and dirt leaked out of the gaps in the wicker. Plus, now I can have the washing baskets back for the washing. Win, win. 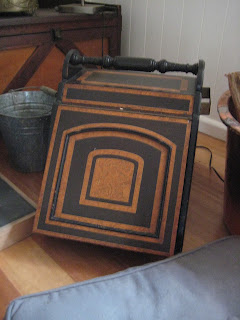 My electric beaters broke. We attempted to use an old manual egg beater instead, which is brilliant for whipping cream or eggs, but useless for creaming sugar and butter. Creaming butter with a wooden spoon is a little tedious, but doable as long as you only want basic creaming, and not light-and-fluffy creaming. I must say, those long vanished housewives must have had excellent muscle definition, so if I swapped my weekly arms workout for creaming sugar and butter it would probably all equal out. Our daily exercise routine was Granny's daily chore list. 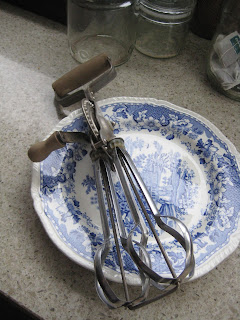 However, when I borrowed an electric beater from a friend to make cup cakes for a party, she gave me a set because she had two. Truly, there is so much stuff in the world, and I have wonderfully generous friends. Even so I am aiming to cut down on appliance use so I have pulled out a bunch of cake recipes that don't require creaming. Now I know why boiled fruitcake and slice recipes where you melt the butter and sugar together and mix, were always presented as marvels of ease in old cookbooks.

I need to build a retaining wall to prevent my future vegie garden from sliding down the hill. First I planned to use interlocking concrete bricks, which are made locally. But concrete isn't particularly sustainable, plus the quote for the bricks was over $1000. Also, each brick was 18.5kg, and the capping stones were 20kg. I have no off-street parking, and each brick would need to be hauled down six wonky garden steps, around the house, and down another five or six steps before even reaching the retaining wall. Recipe for a dicky back and no friends, or hundreds of dollars more to get a nice man in to install them. Time to think again. 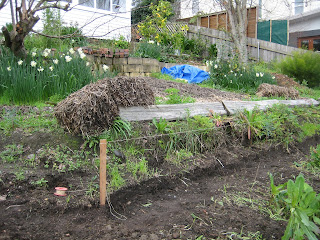 I looked on Gumtree and found a local timber mill who will cut hardwood sleepers to order. I watched a number of you-tube videos on how to build a retaining wall, tramped around the garden with a tape measure and string line, designed it on paper, and dug a more-or-less flat foundation. Soon I will have fifteen timber sleepers delivered for the sum of $318. Then, I will build a retaining wall. Yes, me. Fingers crossed..

See that gorgeous black earth? When the fence man came to rebuild a section of fence for me, he came to me with the bad news. "You know how at your old place I had to go out and hire a jackhammer to break up the clay to put your fence posts in? Well, at this place I can't find any clay at all so I'll have to go and buy some more bags of cement." Yes folks, the bad news every gardener wants to hear. I went out to inspect the one and a half metre (five foot) deep holes he had dug, perfect black loam all the way down. No raised garden beds necessary here. Bliss.
Labels: building green and thrifty

fran7narf said…
"SCORE!" on the soil front (she says with not an inconsiderable degree of jealousy). That's a really good price for those hardwood sleepers. Would you mind passing on the sawmill name/number? We just hauled the first 4 (of 24) sealed fridge wickers up to Sanctuary. Sanctuary is officially a swamp at the moment and Earl and Bezial had a most excellent time wallowing like hippos while we hauled and squelched and slipped in our wellies to get the first row into place. It is hard to believe that this squelchy quagmire will be dry as a bone and hard as rock in about 5 months time but all of the hard work installing these fridge wickers will be well worth it with huge water savings (financially and much less water used) as well as many other benefits that I will bask, shamelessly, in when summer has dried the rest of the property out and I no longer have to water the veggies for 3 hours a day. Have you ever thought about using some kind of wicking beds Jo? They are very cheap to implement and save a whole lot of water. My initial thought about using fridges to create wicking beds was that they would be ugly but seeing what Sanctuary has descended into (think "The thing that rose from the swamp and tried to take over Manhattan" and you are part of the way there...) and how nice and neat the first row looked when we finished squelching and sliding it into place, I don't think that is going to be an issue. Even if it was, I would take function over form any day. I am sharing what we are doing and how we are doing it on the blog if you are interested. It's all about making the most of what you have to be honest and trying to be as sustainable as you can in the process. Fridges are dirt cheap, hold just as much water as (scarce as hens teeth) bathtubs and have built in insulation as an added bonus.
Saturday, 09 July, 2016

Jo said…
Fran, I had a look at your magnificent fridge wicking bed prep post. I am so looking forward to seeing how this experiment pans out. I believe I have been visited by the gardening fairy here. Although I have very little winter sun in the back garden, there is one corner that gets hours per day, and I am pretty sure the higher summer sun will provide ample photosynthesis time for all my little green babies. And I am so excited about my black gold garden beds. I believe they will hold water really well too, as the previous owners left in November, I moved here in April, and the garden didn't get a drop of water all through our dreadful drought of a summer - and yet the garden is thriving. There were two dead baby trees, but I can't see anything else that seems to have suffered, even the two small lemon trees were perfectly happy. The soil at my last place though, well, it just broke my heart. 30cm of grey, sad 'soil' on top of orange clay hardpan. Even after 15 years of tender loving care, that soil turned to mud in winter and dried up and cracked in the summer. So I am feeling your pain as you battle with nature to coax some vegies out of uncooperative soil..
Saturday, 09 July, 2016

Jo said…
Sorry, to answer your question, I linked to Eyewood Timber's facebook page in the post, and upon revisiting my quote I realised the sleepers are even cheaper than I thought - $19 each plus $35 delivery, $318 all up. Bargain! So worth buying local at this price:)
Saturday, 09 July, 2016

Gretchenjoanna said…
How inspiring you are! And the news about your soil is splendid indeed!!
Saturday, 09 July, 2016

The soil in the photo is really very good – those old timers knew a thing or two about soil. Are you sure you didn't purchase the house because of the excellent soil quality? :-)!

Your dog looks seriously happy and content. My lot are cooking their heads in front of the wood fire tonight too. It is very cold, wet and windy here. What a crazy week of weather it has been.

I use those manual egg beaters too, and I won't mention that the electric one which is over 30 years old smells slightly of ozone when in use - that can't be good. Anzac biscuits are a melt and mix arrangement and thus as you correctly point out, they are seriously quick to make.

Your string lines look quite professional. And are those Jonquils in the background? I've only spotted the first of those here over the past day or so, and yours look like they have been growing for weeks. The sleepers may be easier to move using two people (one at each end) and remember to wear gloves as raw (rather than the smooth dressed timber) hardwood may have splinters which are not much fun. They will get less prone to producing splinters over time and they may weather to a nice grey colour.

Being on a slope, you may now understand my obsession with all things rock related. The hardwood should be pretty good too. You can use sleepers embedded vertically to retain the horizontal sleepers, but I look forward to seeing your solution. Remember that there are only learning experiences and I am impressed that you are taking this project on.

Jo said…
Chris, yes, I have jonquils, hundreds of them, the pale single version that naturalises in old gardens. Lovely:) And yes, the young man who delivered the sleepers (by himself!) told me that each one weighs 50kg, so I will be phoning a friend when it comes time to move them..
Sunday, 10 July, 2016

e / dig in hobart said…
oh lucky you on that beautiful soil! there is a gardening god in the world, and she is smiling on you :-)
I must admit that wooden wood box is rather ugly... I'd be working out how to paint it or minimise that horrid mission-brown like brown-ness. sorry!!!
Monday, 11 July, 2016

Anonymous said…
Goodness you are becoming the handyman. Building your own retaining wall! Impressive.

As to cakes, once you move those sleepers you will have the strength to cream butter and sugar! But boiled cakes sound just as good.
Tuesday, 12 July, 2016

Jo said…
e, I like to think it is at that point of ugliness where it tips over into fabulousness!